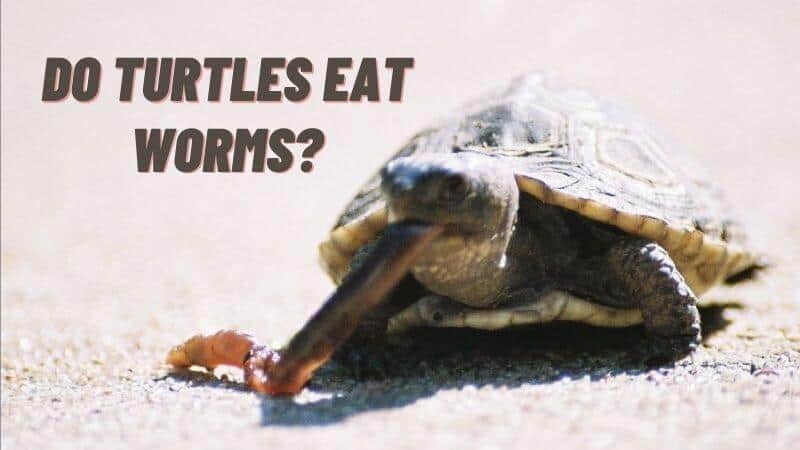 High in protein, iron, and amino acids. Helps break down food and repairs body tissue. The buzz is that worms are the next wriggling superfood around the corner. While I’m sure it’ll take a long time before worms on the dinner plate are normalized, it’s a staple food for several other species. But what about our reptilian pets? Do turtles eat worms?

Yes, turtles eat worms, and it’s perfectly natural. Worms are one of the most nutrient-dense foods turtles find in the wild. They are an excellent source of protein that turtles need, especially in the early stages. As omnivores, turtles love snacking on worms alongside a wide range of other bugs and critters.

Watch this amazing video of a slider eating worms!

What Kind Of Worms Can Turtles Eat?

Turtles aren’t picky. They’ll eat any kind of worm they can get their claws on. Here’s a list of worms safe for turtles when given in moderation:

Yes, baby turtles, too, can safely eat worms in moderation. While they need a good amount of protein during their formative years, it’s best not to rely on worms too much. Give smaller worms like mealworms and waxworms so they can munch and swallow easily.

If you only have big worms at your disposal, you can cut them into two pieces when feeding.

Don’t get queasy! Although captives, our pet turtles have every right to enjoy nutritious food they’d snack on in the wild, right?

Absolutely, yes. Pet turtles can eat worms safely as long as you don’t overfeed them. It’s best to give gut-loaded worms to deliver that extra load of nutrients. For live worms, I usually feed the worms first with boiled veggies so that they’re full and healthy before they become a delicious snack for my sliders!

If the feeder worms are chock full of essential nutrients, your turtles will be too! Thus, when giving live worms, I always make sure to gutload them with maximum nutrition.

How To Gutload Worms For Turtles?

Give nutritious food like collard greens, papaya, carrots, and squashes around 12-24 hours before feeding your turtles. This will help to ensure that the nutrients are passed down to your reptile!

This whole ordeal may seem nonsense if worms are already nutritious in the first place, right? The truth is that most feeder insects lose their nutritional value when they are dormant for several weeks.

Also, most feeder insects have low amounts of calcium and high amounts of phosphorus. This is quite the opposite of what a turtle needs. The ideal calcium: phosphorus ratio for turtles is 2:1.

You need to correct the ratio when gutloading. Here’s drown-free, calcium-fortified gel water for feeder insects to achieve the correct balance.

Don’t go by the name. It’s perfect to gutload mealworms too.

I recommend removing the stored mealworms from the fridge and letting them sit at room temperature for some time so that they start moving. It’s always fun to watch turtles get excited and splash around as they try to catch the wiggling worms.

How Many Worms Can Turtles Eat In A Day?

Since captive turtles don’t get as much exercise as their wild cousins, it’s best to give two or three at a time weekly. Turtles tend to beg food like dogs – so, make sure you’re not going overboard.

That being said, each turtle’s nutritional needs and exercise are different. On top of that, their age and species also play a role in determining their dietary pattern. You know your turtle and its needs best.

On turtle forums, I came across all kinds of owners. Some routinely feed earthworms, while others maintain a strict regimen of two worms per week.

You know your turtle and its needs best.

Especially if the caterpillar in question is brightly colored and has spiky hair, steer clear of it!

Now that the answer to do turtles eat worms is clear, let’s reevaluate the answers once again from a health point of view.

Mealworms are the larval form of mealworm beetle and are loaded with some essential nutrients turtles need. 100 grams of mealworm larvae contains around 206 calories and 14-25 grams of protein. Likewise, they also have good levels of vitamins and minerals like potassium, iron, and zinc.

So, yes, mealworms are suitable for turtles – even better if you gutload them first.

And it’s pretty easy to rear mealworms. They can prolifically thrive in even small spaces. You can gutload them with oats, potatoes, carrots, and apples.

I personally don’t like the hassle of rearing worms. So, here’s a great option I rely on: Non-GMO dried mealworms from Hatortempt.

Reportedly, these mealworms are raised on high-quality feed and are quick-dried to ensure the crispiness and fragrance stay intact. And I think my turtles will agree – they absolutely love it.

Earthworms are one of the most nutritious worm options available for animals. An earthworm generally contains 60-70% protein, 11% fat, 5-20% fat, 2-3% minerals, and a wide variety of vitamins. So, there’s no doubt that earthworms make excellent treats.

In an acre of land, there can be over a million earthworms! No wonder we see them everywhere! But here’s a catch.

Don’t give randomly found earthworms to your turtles. There’s a solid chance that these worms are exposed to pesticides and fertilizers.

If you want to offer nutritious earthworms, either visit your local pet store for some healthy, live options or buy some dried earthworms online.

And not just for turtles – earthworms are used as feeders for fish, pigs, and fowls too!

So, it might not be very economical to give worms to your snapping turtle. But you can always use them as treats.

Yes, painted turtles can and love eating worms. They’re known to hunt down a wide range of critters, including worms, in their natural habitats. A painted turtle’s diet should consist of at least 30-45% protein.

However, don’t just rely on worms to meet this requirement. They’ll become picky eaters in no time if you routinely give worms. Try to fulfill some percentage of protein quota via veggies and pellets too.

In the wild, terrestrial box turtles often hunt down earthworms that are available so easily.

However, different species of box turtles have different nutritional needs. So, don’t forget to look up species-specific information.

Yes, red-eared sliders love worms. My sliders even beg for one more worm when I feed them. For sliders, the standard practice is 50% animal protein, 25% pellets, and 25% pellets.

Since red-eared sliders grow quite big, they can quickly gobble up all kinds of worms, including silkworms and super worms!

4 Things To Consider When Feeding Worms To Turtles

By now, the answer to do turtles eat worms is quite clear! However, there are a few caveats that’ll bite your pet in the back if you don’t regulate the amount they get. For instance, their high protein content can cause pyramiding, and high phosphorus levels can hinder calcium absorption. Likewise, worms can also be carriers of potentially dangerous parasites. And lastly, regularly feeding on tasty worms can make your pet a picky eater – in turn stunting his overall development.

Protein is imperative for turtles. But do you know excess protein intake can cause the shell to build heavy layers of keratin?

Pyramiding is one of the most common side effects of protein overdose that can impair a turtle’s development for a lifetime. It is characterized by the excessive upward growth of the scutes. As a result, each scute develops to have a pyramid-like, elevated shape.

And by now, you probably know that worms contain an abundance of protein. Thus, it’s crucial to keep the worm consumption in check.

Unfortunately, the effects of pyramiding cannot be reversed. So, you need to be really mindful about the amount of protein your pet is consuming.

Turtles are known to eat everything, but if you consistently feed tasty animal protein, they’re bound to develop a taste for it. I’m writing this from my own experience!

At one point in time, my slider completely started avoiding her veggies, which was quite challenging.

And I’m sure you know very well what happens if turtles don’t get a well-rounded diet. Since worms have a generous serving of carbs and fat as well, there’s a good chance your turtle will become obese.

And obesity in turtles comes with its own set of complications. For instance, your turtle will have a hard time retracting to the shell or supporting its own weight.

Worms often have a higher concentration of phosphorus than calcium. However, the ideal calcium: phosphorus ratio is 2:1. So, once again, you need to be quite careful about the number of worms your turtles consume.

Phosphorus does impart health benefits, but overconcentration of this nutrient can hinder the calcium absorption process by forming insoluble calcium phosphates.

You can try to reverse and balance the ratio by gutloading the worms with calcium-rich food.

As nutritious as worms can be, they can also be carriers of deadly pathogens. This is one reason I prefer frozen worms to live ones. Dehydration and refrigeration do kill most parasites in the process.

If you prefer live worms, make sure to buy them from a reliable pet store.

And if you include worms in a turtle’s diet like me, don’t forget to deworm your pet regularly. It’s best to get the stool sample checked by a vet every 6 months.

Last year, my younger slider was diagnosed with a case of microscopic roundworms. Don’t wait for telltale signs like fatigue appetite loss like me!

The vet gave him two doses of dewormer. Make sure you don’t take the matter into your own hands.

My turtle was worm-free when rechecked after a month, but it still took him a good couple of weeks to get to his original, healthy state!

That was one long article, wasn’t it? But I wanted to make sure that you don’t miss out on anything.

So, do turtles eat worms? No brainer! They love eating worms. And in the wild, they even go extra lengths to these delicious snacks.

Turtles can eat most kinds of worms like earthworms, mealworms, bloodworms, hornworms, and nightcrawlers.

When given in moderation, worms impart several health benefits. They can be an excellent source of protein and vitamins that turtles need.

However, like most things in life, if you go overboard, you’ll regret it. Overconsumption of worms makes your turtles prone to pyramiding, obesity, and worm infestation.