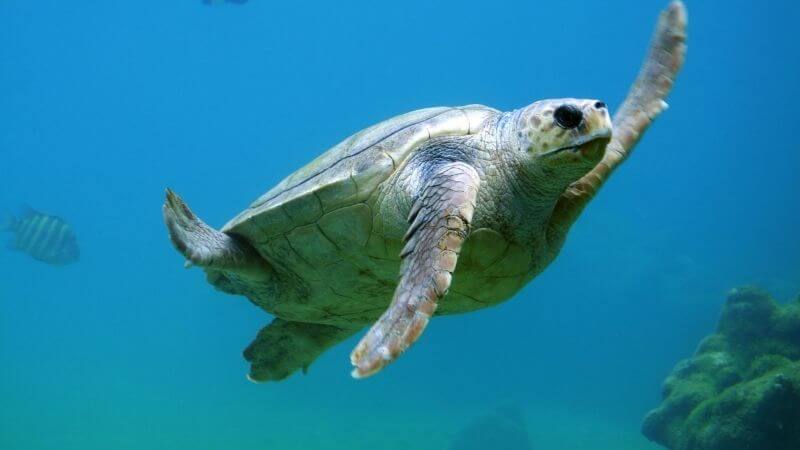 Most aquatic animals have fins. The thrust provided by the fins helps lift a fish’s body in the water. They provide motion stability when inside the water. But what about turtles? The fact that they spend most of their time inside water hints that they have fins. But is it really the case?

So, Do Turtles Have Fins?

The closest resemblance to fins is that of the sea turtle’s flippers. Let me tell you how a flipper differentiates itself from fins.

Difference Between Flipper And Fin

Fins do not have bones or skeletal structure within and are simply made up of cartilage. Whereas flippers have bone structure underneath the outer layer. They consist of cartilage, joints, and tendons.

If you X-Ray a turtle’s hand, you will see how similar they are to a human hand and shoulder. Almost all fishes have fins, opposite to cetaceans like whales and dolphins, who have flippers. Penguins, seals, and walruses, too, have flippers.

Do All Turtles Have Flippers Then?

Why Do Turtles Have Webbed Feet?

Most aquatic turtles have webbed feet. These feet have evolved over a million years. They do not have separated fingers like ours. Their adjoined fingers create a larger surface area, allowing the turtle to propel through the water effectively. Turtles spend their time both on land and water, and their webbed feet also helps them walk on land.

Freshwater turtles like common snapping turtles and red-eared sliders forage on both land and water. Loggerhead snapping turtles can even climb trees and eat insects found in trees. In water, their webbed feet make them quick enough to catch their prey easily. So webbed feet help turtles widen their foraging area, which is necessary for their survival.

Why Do Sea Turtles Have Flippers?

Sea turtles have flippers instead of webbed feet. Unlike other aquatic turtles, sea turtles rely solely on the sea for food. Their strong flippers help them cross thousands of miles for foraging on sea vegetation and jellyfishes. These sea turtles do not require webbed feet as they rarely visit lands. They will only come to land when they have to lay their eggs.

Except for locomotion, their flippers have other extensive uses. Here are some of the surprising ways a turtle uses its flippers. This will reveal how good they are with their flippers.

Despite spending most of their time on the sea, the female sea turtle has to go to the shore to lay eggs. Using her flippers, she will dig a hole of about 16 to 20 inches deep. She will again fill the hole with the dug-up sand with her flippers.

A turtle will hold her prey using her flipper while she chews on it. Photographs of a sea turtle holding a jellyfish while devouring had gone viral some time ago. Turtles usually do that to prey who try to escape from their clutches.

They also use their flippers to toss the prey into the air to paralyze them temporarily. This will disorient the target and let turtles enjoy their dinner.

Eating jellyfishes can be messy as they have trailing tendrils that prevent them from being eaten as a whole. So while preying on a jellyfish, the turtle will slash the tendrils with flippers and cut them into smaller chunks, making it easier to consume.

Anatomy Of A Turtle’s Flipper

However, their finger movements aren’t limited despite being wrapped by the flipper. They can still conduct several activities which they require for their survival.

Other animals like whales, penguins, dolphins, manatees, platypus, dugongs, seals, and walrus also have similar anatomy of their flippers like turtles.

So, How Come These Turtles Became Good With Their Flippers?

Despite having a developed frontal cortex, turtles learn to use their flippers in new ways, like holding a jellyfish and slashing it into smaller chunks. Though it’s not always highly effective to use a flipper like that nevertheless, it is a new way of using their flippers.

Scientists have been amazed after discovering the turtles using flippers for hunting. Turtles are one of the few creatures who aren’t guided or taught by their birth givers. They never have the chance to learn from their seniors, yet they are learning everything on their own.

Some believe that a longer lifespan enables them to experiment with many things independently, so they come to know how these things work. Isn’t it so fascinating?

Now that we have discussed webbed feet and flippers, let’s discuss tortoises and their elephant-like legs.

Tortoises are the turtles who dwell on the land. They do not rely on water like aquatic and semi-aquatic turtles. Though tortoises fall under the turtle family, they have distinct behavior with their different physical attributes.

So, How Do You Differentiate A Tortoise From A Turtle?

As I mentioned earlier, tortoises solely dwell on the land, whereas turtles require water to dwell in. Physically, the shells of tortoises are shaped like domes, which can fit in their entire body. Whereas the turtles have streamlined bodies to pierce through water current while swimming. When in danger, they are only able to partially retract their body.

Tortoises have elephant-like feet. The hind legs are shorter and thicker to bear the heavyweight of the gigantic shells, whereas most turtles have webbed feet or flippers. A turtle’s feet can elongate more than a tortoise’s feet.

Final Words: Do Turtles Have Fins?

Most aquatic turtles have webbed feet, which helps them to survive in both land and water. Though these turtles spend most of their time on the water, they forage on land as well. Species like loggerheads, snapping turtles are found traveling for miles in search of suitable habitat. Their webbed feet help them cross such distances, just like the tortoises.

Sea turtles, on the other hand, have flippers. These flippers have skeletons similar to bones in our fingers. Flippers have several different uses than just locomoting. New footage has revealed that sea turtles use them for holding their prey.

Finally, tortoises are land-dwelling turtles that have elephant-like legs. They walk on toes instead of feet and do not need water to survive like aquatic turtles. When in danger, they can retract their whole body into the shell.