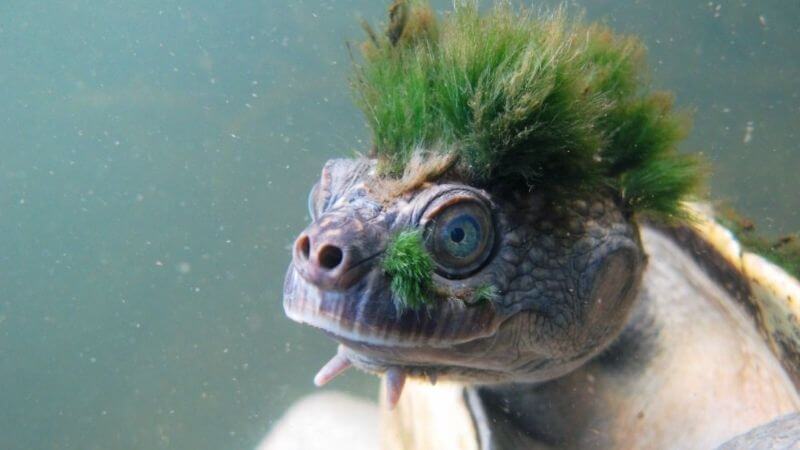 There are several images of a turtle species by the name of Mary river turtle, known for their mohawk hairdo. These images will definitely make you wonder if some turtles have hair.

Without further ado, let’s dive into whether hairy turtles exist or not.

Do Turtles Have Hair?

No, turtles do not have hair. Instead, they have scales like most reptiles. Keratin, a fibrous protein found in most animals, also makes up scales in turtles. This is the same protein that makes claws, hairs, nails, and scales in every animal.

For a long period, scientists believed that the hair and scales found in animals originated independently of each other.

To know why scientists jumped to this conclusion, you should first know about placodes.

Placodes are the tiny bumps of tissue found on the surface of a developing embryo. These thick tissues later develop into feathers and hair.

Previously, placodes were only seen in embryos of birds and mammals, which is why experts believed only these two groups had feathers and hair, and reptiles didn’t.

In the context of turtles, there was no presence of placodes. This led to several assumptions like turtles either lost it, or the mammals and birds independently developed them.

But, a recent breakthrough has led to the discovery of placodes in turtles, too.

Why Couldn’t Scientists Discover Placodes In Turtle Embryos Before?

While the placodes in embryos of birds and mammals last for more than enough time to get noticed and have their data taken, it isn’t the same for turtles.

Placodes in turtles form only for a brief period, about 12 hours. Furthermore, it pops up in a disorderly fashion, making them even harder to spot. It is even more random because it differs from species to species in turtles.

Until the recent discovery, this randomness wasn’t closely studied in turtles, so scientists concluded that placodes weren’t present in turtle embryos.

However, as observed, it has been deciphered that the birds, mammals, and reptiles are the descendants of the same lineage of ancient reptiles.

Turtles have thick and rubbery oil-suffused skin, which is a great insulator. Their skin can withstand even the coldest temperatures.

The exact composition can be found in a turtle’s scales and claws.

As the turtle shell grows, the old scutes will fall off. Its epithelium will produce a new scute with a bigger diameter beneath the old one, allowing a growing turtle’s shell to expand.

Do Mary River Turtles Have Hair?

No, Mary river turtles do not have hair on their body. The hair-like thing on its head is the vertical strands of algae, giving it the popular name “Punk Turtle.”

Mary river turtles are only found in the Mary River of south-eastern Queensland in far-west Australia.

They can breathe through their cloaca, which helps them stay underwater for up to 3 days.

Read: How Do Turtles Breathe?

After submerging themselves underwater for days, these river turtles come out with algae sticking to their heads. And this is what gives them a hairy appearance.

The same hairdo can be seen in your pet turtles if you don’t regularly clean their habitat.

So, here’s how you can remove algae from your turtle tank:

If you want to learn more on how to keep your turtle tank clean, here’s how to do it:

And if you want to know more on how to clean a turtle’s shell, check out this article:

Final Words On Do Turtles Have Hairs

Though most reptiles do not have hair, there are some exceptions. Some species of lizards do have hair.

But it is limited to only a few reptile species.

Alas, turtles do not fall under those chosen few categories.

Be that as it may, turtles have scales instead, also known as scutes. As they grow, these scutes will molt and provide space for newer ones.

Lastly, you might have seen a specific turtle with a mohawk hairdo.

Do not be fooled by it. The mohawk isn’t actually hair. The algae accumulated on their heads is what gives Mary river turtles the punk hairdo.