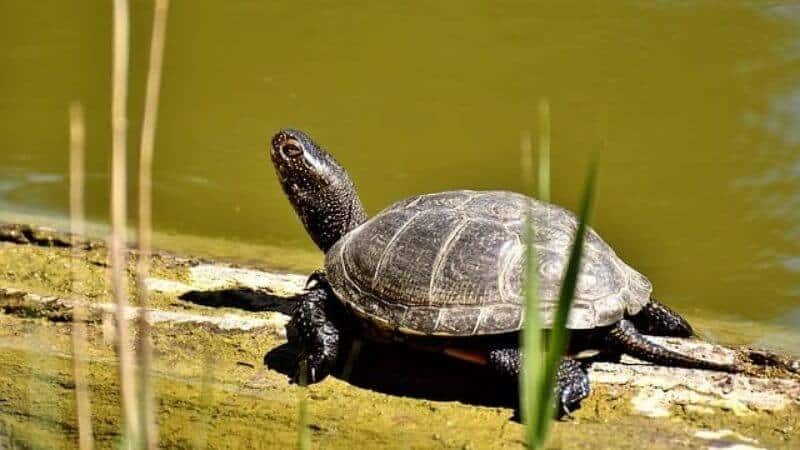 Tails in animals serve an important role. For example, a cheetah has an aerodynamic tail that helps maintain balance while running, whereas a fish uses its tail to change direction. The tail mechanism of fish has also been implied in modern-day submarines and aircraft. But what about a turtle? Why do they need tails?

Do Turtles Have Tails?

Yes, all turtles have tails. Males have their reproductive organs in their tails, so their tails are thicker and longer than females. In female turtles, the tail hides the vent of their cloaca and only opens during mating.

Unlike other animals, the length of their tail is short. Tails in a female turtle have no significant value, which further suggests the reason behind having a smaller seat than a male’s.

So, it is intriguing that a male turtle has its reproductive organs on its tail. But how does it use it during reproduction? Let’s venture into this discussion.

How Do Turtles Use Their Tails For Reproduction?

Unlike fish and other aquatic lives, turtles do not use their tail to navigate or help them swim. Leopards use their tails for balance, and monkeys use them for climbing, but a turtle doesn’t use its tail for both purposes.

Tails in males are designed for one purpose only, and that is to reproduce. The males have penises in their tails. It is located in the inner tail at the bottom. During the intercourse, the rest of the tail helps a male turtle hold its female in position.

The tip of the tail is a sensitive area for both sexes. Turtles are clumsy creatures and will have a hard time discovering the exact opening of the female turtle’s cloaca. It can be a daunting task when one carries a dome on their back. So this sensitive tip of the tail helps figure out the opening of the cloaca through which a male turtle releases its sperm into the female turtle’s womb.

Female turtles, on the other hand, do not have reproductive organs in their tail. Instead, they use it to cover their cloaca (vents). They pull their tail upwards or sideways during mating to let the male turtles penetrate their penis into the vaginas.

Three Other Purposes Of A Turtle’s Tail

In the wild, we can find a turtle basking in unusual places. From the top of the tree to rocks and ridges in height, a turtle will leave no stone unturned to get that perfect spot. To reach such sites, a turtle’s tail helps balance its body by working as an anchor, thus decreasing the chances of falling from the height.

For example, research has shown that the juvenile snapping turtle’s tail helps stabilize its body while ascending steep slopes.

Tails in turtles are situated right above the cloaca. Just like the shell, the tail of a female turtle protects the cloaca from getting a first-hand injury.

Their cloaca has soft skins, which can be torn off easily by predators like black vultures, sea birds, and predator fishes. So, a tail acts as a defensive layer of protection in the turtles.

Another fascinating thing about a turtle’s cloaca is that it breathes through its butt (cloaca) during hibernation. So you now know how vital cloaca is for turtles and why it requires protection.

Serves As The Fifth Flipper

After laying eggs in the sand, turtles need to fill up the holes to hide those eggs from predators. This is why they move their flippers just like the windshield to level the land and prevent the spot from looking dubious.

While moving the flippers, their tails also do a fair share of levelling the sand above the egg nest.

Though there may not be too many uses for a turtle’s tail, the few functions suffice its purpose. And with the presence of predators all over in the wild, it is possible that their tails could be injured or chewed off by the predators. So could the chewed off tail regrow?

Can Turtles Regrow Their Tail?

Though turtles are reptiles, their entire tails do not regrow like a lizard’s. However, if you nurse it with proper medication, the broken tail can still heal, but it won’t regrow fully.

The wounds will heal over time with the right nursing, but they won’t regrow fully. Even a lizard’s new grown tails aren’t like the originals.

And What About Turtles Not Growing Their Tails?

Some turtles, due to genetic disposition, aren’t able to grow tails. Or sometimes, the baby turtle is yet to develop its tail. Perhaps you are mistaking your turtle’s size for its age.

This could be the reason why your baby turtle’s time to grow tails hasn’t yet come. Once it enters the adult stage after 6 to 7 years, the tail will be visible.

Do All Turtles Have Tails?

Yes, all turtles have tails. They aren’t seen in the early years but can be visible once they reach sexual maturity.

The female turtle’s tail will be shorter than the male’s. Their tail acts only as a protection for their cloaca, whereas the tail in male turtles has a reproductive function.

Can Turtles Retract Tails Inside Their Shell?

Which Turtle Has The Longest Tail?

Snapping Turtles have the longest tail in all of the turtle family. They have a robust tail which helps in stabilizing their body movement during uphill ascend.

Final Words: Do Turtles Have Tails

Studies have shown that turtles’ tails are an integral part of their body. Their tails have evolved through millions of years. However, their importance over the course might have diminished a lot. Their ancestors used to have longer tails with spiked gradients for defense, whereas this lacks in modern-day evolved turtles.

Turtles today have no use of their tail for defense. They now serve as reproductive organs in male turtles and a cover for the cloaca in females.