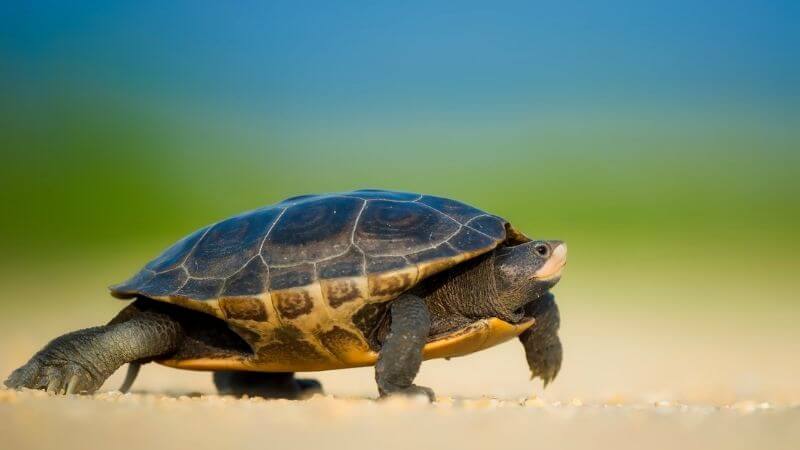 The answer to do turtles jump is quite contextual. What you consider jumping might be hopping for some and vice versa. You might have seen your pet turtle jumping in or out of the water. Or you could have even seen him hopping on land. So do turtles jump? If yes, why? Let’s find out.

Yes, turtles do jump but not that well. Small and medium turtles can jump, but larger turtles are not too skilled at it. As turtles are not too keen on movement, they can only jump about 2-4 inches high. But some species, like the Common Snapping Turtle, are quite good jumpers.

Here’s a video of a snapping turtle in action:

So, How Do Turtles Jump?

Turtles are quadrupedal animals – they have four legs they use for walking and jumping. However, all these limb muscles do not have enough thrust power to jump like we humans. It’s more hopping than jumping. A turtle bends both its back legs and front legs to jump.

After that, they use leg muscles to thrust them forward to jump. In addition to the forward jumps, turtles can also perform horizontal jumps. Humans can jump straight up, bounce back to the right and left. In the case of turtles, they aren’t as flexible as we are.

Their torso isn’t flexible enough to bend and flex as some other animals have. Also, they have heavy shells, which adds more weight to their jump and makes it even harder.

Let’s talk about the turtle’s shell, and is it the reason why turtles aren’t able to jump that high?

It’s not necessarily the case that a turtle’s shell is the sole reason they cannot jump high. Shells only account for 25 to 30 percent of their total body weight. Turtles like a Red-eared Slider, Box turtle, Mud turtle, and Snapping turtles do not have that heavy shells compared to the rest of the body parts.

Apart from the shell, a turtle’s heavy body is a result of its muscles. A turtle has developed body muscles, which are used extensively while jumping and moving. Now that we know that shell isn’t the only factor causing turtle’s inability to jump higher, we will move unto why turtles jump.

Why Do Turtles Jump?

In the wild, animals need to find their food in obscure places. So, they often need to jump high to reach their food. When chased by predators taller than them in the food chain hierarchy, a sudden movement like jumping can help scare off the prying predators. However, in a turtle’s case, the reason behind jumping is quite different.

Turtles live near water sources, and they need to jump off cliffs and boulders to reach the water. Usually, a little thrust is enough – nothing too dramatic. This is the main reason why turtles jump.

Some other reasons why do turtles jump are when they feel scared or when they sense a threat on their way. Some species like Snapping turtles do jump quite often when threatened.

Can Turtles Get Fat? How To Help Your Turtle Lose Weight?

How Far Can Turtles Jump?

The length covered by the jump depends upon several factors. Medium-sized turtles can jump anywhere from 3 to 4 inches (7 to 10 centimeters). Small-sized turtles’ jump is relatively shorter. They can jump up to 2 inches (5 cm).

However, bigger turtles are not much of a jumper. Their body mass doesn’t allow them to jump. Along with the shell, their bulky muscles make them inefficient jumper.

To put it simply, a jump means that the turtle’s body leaves the surface entirely up to a certain height. In some conditions, turtles can jump even farther and higher than what I have mentioned above. When in motion, turtles can jump greater distances than they’d do from a standing position.

Which Turtle Species Jumps The Most?

There is no clear evidence on which turtle jumps the most. But the Common Snapping Turtle is known to have remarkable jumping ability than others in the turtle family. As its name denotes, Common Snapping turtles are vicious biters that don’t hesitate to bite anyone they see as a threat. They can be seen jumping way beyond an average turtle’s jump and can even bite while jumping.

Their fierce bite can be deadly and is said to chop off a human’s finger easily when in a closer range. What you’d deem as a safe distance for other turtles will not be applicable for a Common Snapping turtle. Their hind legs have relatively more elasticity than other turtles, helping them hop off the ground quickly.

For the record, they need that impeccable jumping ability to dive into the freshwater sources from the cliffs.

Every species have their unique characteristics which nature has gifted them as required. We humans have been given conscience but have been left out of several superior features. And, the same is the plight of a turtle.

They have hard shells to protect them but are one of the slowest in walking. Unlike for other reptiles, their food sources are stationary. Also, their food doesn’t grow or live in great heights. Thus, they don’t require the jumping ability to gather their nutrition from the trees like monkeys.

Jumping is one of the negligible characteristics which they don’t need on a day-to-day basis for surviving.

Do Turtles Jump Out Of The Tank?

Yes, turtles do attempt jumping out of tanks if their habitat doesn’t meet their requirement, and often, they succeed. Some reasons why turtles come out of the tank are to bask, lack of enough space, dirty water, and stress.

Let’s look at the top 5 reasons in depth.

Turtles require light and heat to bask. Basking is necessary for a healthy shell. If they are bereft of proper light and heat, their shells will start to discolor and deform. And ultimately, they will try to jump out of the aquarium. If the water temperature is too cold for a turtle’s liking, it’ll try jumping out and getting to land to bask.

Here’s a reliable and affordable by Zacro that I use for my turtle tanks.

When The Tank Space Isn’t Enough

Turtles grow substantially larger than aquarium fishes. Also, they’re avid swimmers. So, a fully grown turtle will require a much larger space for swimming. If the tank size isn’t large enough to accommodate the turtle’s territorial needs, it will jump out of the tank.

A baby turtle will require at least a 20-30 gallon tank to remain happy. Increase your tank space according to your turtle’s size if you often see your turtle coming out of the tank.

Turtles will also start to jump out of the tank when the water gets too dirty. Pet turtles often belong to freshwater species. So, they find it hard to adjust to a dirty water tank. You need to clean the tank and change its water regularly if you don’t want a turtle jumping out of its tank.

If the tank water you use doesn’t meet a turtle’s natural habitat’s water parameters, a turtle leaving its tank is a common sight. No matter how many times you put him back in the tank, he will try for the hundredth time to get out of there. To achieve your turtle’s natural habitat criteria, you need to routinely regulate the amount of ammonia, nitrate, and nitrite levels in the tank.

Routine water changes won’t do much if the filter isn’t efficient enough. Also, turtles get quite stressed when you are changing water or cleaning the tank. Thus, it’s best to invest in a solid filter that’s capable of breaking down and removing the gunk present in the tank.

Here’s one I recommend from Cascade:

Three things I love about this filter:

Turtles can get anxious fast if there’s a change in habitat. An addition of some aggressive fishes in the tank can also make them anxious. Likewise, the tank’s location also matters when it comes to reducing anxiety in your turtle. Do not keep your tank in places where there are loud noises and footfalls now and then. This will only startle your turtle – causing it to jump out of its tank.

How Do Human And Other Beings Jump?

We use our legs while jumping. It is general knowledge that creatures with long legs, proportionate to their bodies, have excellent jumping abilities. Our legs have muscles, which add kinetic energy to our bodies when jumping.

Humans can achieve even farther, impressive distances when in motion as the running exerts extra thrusts while jumping. That’s why, often, the best jumpers are great runners too. They have excellent control of their leg muscles even at top speed.

In the animal kingdom, the ones that are renowned for jumps have a different technique. Unlike humans, who use kinetic force, animals like kangaroos use potential energy to jump greater distances. The elastic power in their leg muscles and their legs’ length helps them cover more distance than humans.

Before the jump, they pre-stretch their elastic body parts like tendons that act as rubber in their legs. When released, they can cover significant distances during the jump. Also, these rubbery legs help them balance easily while landing.

Their hind legs are much developed than ours and are excellent thrust providers. Also, their legs are longer than their upper body.

Another great example is a frog’s body. Its leg is twice the length of its body.

In fact, their leg muscles weigh just about 20% of their body weight. A significant jump requires more extraordinary muscle work, and a frog’s muscles are quite remarkable in exerting that force.

A light body is also a factor that helps frogs, insects, and kangaroos to add extra distance in their jump.

Conclusion On Do Turtles Jump

Of all the things turtles are remembered for, jumping seldom comes to one’s mind. And although athletics isn’t their greatest suit, some turtles can jump their height. They do jump out of their tank if they aren’t getting enough space for basking, if the tank water is dirty or they are stressed. So, fulfill these needs, and your turtle won’t be jumping out of the tank – reducing risks of injuries.

How Strong is A Turtle Shell? Are They Bulletproof?