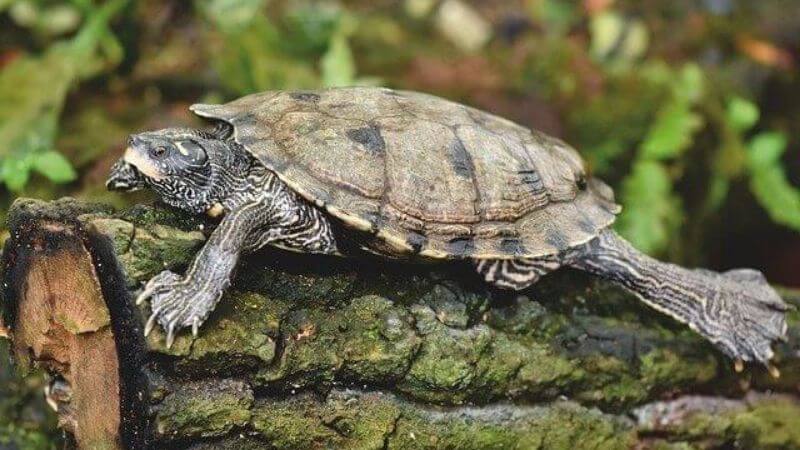 Up until now, turtles were thought to be silent reptiles. They were believed to be vocally absent and creatures with an impaired hearing. But now studies have shed new light, and it hasn’t been long since we discovered that turtles could communicate, too.

So, here’s a detailed read on how turtles produce sounds and why they do it.

Yes, turtles make noises; they create hundreds of different noises, grouped into several categories. For example, they hiss, grunt, and can even sing too.

But that’s not all – they are far more vocally gifted than what we had deemed.

What Sound Does A Turtle Make?

Turtles produce several kinds of sounds. It depends upon the situation they are in. Here are the types of sound turtles make: hissing, grunting, bellowing, roaring, whistling, chirping, gurgling, etc.

It is one of the most common types of sound you will be hearing as a turtle owner. Turtles hiss on multiple occasions –for example, they hiss when they sense a threat.

You might have noticed your turtles hissing when you pick them up.

Most turtles don’t like being touched or handled – so, they will hiss as a warning for you to keep your hands away from them.

However, as they get acquainted with your touch, they will stop hissing.

Another reason behind turtles hissing is a respiratory infection.

Turtles with RI find it difficult to breathe, and as a result, hiss. It is similar to how we breathe when we have a cough.

Typically, basking areas are slightly elevated to keep them dry. So, your turtles will grunt while gradually making the ascent.

So, turtles grunting means that they are generating more power to push themselves or other objects.

Although it is one of the sounds turtles produce, it isn’t something you will hear from your captive turtle.

This sound is a cry of a cornered or wounded turtle, especially common in sea turtles. They bellow and cry if they are injured by predators or are in excruciating pain.

This is a cry for help.

Turtles whistle when they have respiratory infections. This type of sound is produced when your turtle’s nasal cavity is blocked by mucus.

Your turtle’s soft whistle will be audible enough for even you to hear.

Although most turtle sounds are linked to respiratory illness, chirping is not directly related to RI.

Baby turtles chirp at each other when they have to go out into the water at once. Chirping is their way of communicating.

It may be hard to believe, but there have been reported incidents of turtles singing. It isn’t proper singing like one would imagine, but they produce mourning noises that almost sound mellow.

Here’s an interesting article by Lang Elliot with a record of a snapping turtle singing.

It’s a noise they create by gurgling water in their throat while lying on the surface of the water. This is occasionally seen in the captive turtles. It is a signal to show they are hungry.

Turtles burp just like us when they are full. They will burp on both land and water. You will notice when you hear one.

Yes, turtles do fart – especially after eating fruits. Their fart is quite audible. If not, you can definitely smell it.

Why Do Turtles Make Sounds?

Turtles make sounds when they are in danger, in a feud, ill, nesting, mating, etc. Baby turtles also produce sounds to communicate with other baby turtles.

Sea turtles are known to produce sounds to navigate geo-location in vast oceans.

Turtles Make Sounds When They Are Ill.

Usually, turtles aren’t really vocal when they are healthy. So, when a turtle is making noise constantly, you need to know that there’s something wrong with them.

Respiratory infection is one of the most common illnesses seen in turtles. When suffering, they create noises like whistling and crying. Along with that, they show signs like constantly banging their shells against hard surfaces.

You need to book an appointment with a veterinarian if you suspect your turtle has respiratory or other complications.

Turtles hiss when threatened. They will hiss at anybody who comes near them or tries to handle them. A turtle hissing means he is trying to put up a fight against the perceived offender.

Female turtles often express their disapproval by hissing when they receive unsolicited male attention. This could be their way of saying no to fend off unwanted mating partners.

Turtles will even hiss at their owners as they do not like being handled. So if your turtle is hissing, it’s best to leave him to his own devices. Otherwise, you might get your fingers bitten.

Turtles Make Noise When Somebody Encroaches On Their Territory.

Every turtle species have their distinct personalities. For example, turtles like red-eared sliders and box turtles are social, whereas snapping turtles are solitary creatures.

Snapping turtles do not like anybody trespassing. So, they will produce sounds to intimidate and fend off any unwanted incomers.

If the noise itself isn’t scary enough to intimidate the trespasser, they will resort to their powerful jaws.

Turtles Make Noise When They Are Nesting

Pregnant turtles will indicate other turtles when a threat is nearby. They will then collectively produce sounds to fend off predators.

One interesting fact about baby sea turtles is that they start producing harmonic sounds even during the embryonic stage. As a result, they can time their hatching moment through the sounds they make, thus increasing their survival rate.

Likewise, it is found that the freshwater baby turtles produce sounds to call their mothers. The mother turtle also replies and transfers the babies to a safe place.

Right after the hatchlings are born, the female turtle will rally them together with peculiar sounds and take them to marshes, away from the grasp of predators.

Males often produce clucking sounds to find their prospective partner. It is not as distinguished as the noise made by cocks or hens, but it is pretty unique in its own accord.

Both male and female turtles produce sounds by grunting and howling during mating.

But if interested, the female will let the male turtle ride on top of her shell and let him put his penis into her cloaca.

During this course, both turtles will make noise that can be heard from a distance too.

Turtles Produce Sound To Find Their Way By Echolocation.

Similar to bats, sea turtles use echolocation to communicate and navigate. After hatching, the baby sea turtles will head for the sea and swim for over 10000 miles. Amazingly, they are then still able to come back to the same spot where they hatched.

They are only able to do this due to their ability to echo-locate. They emit low-frequency sounds and know their whereabouts in any location in the sea. Through echolocation, they get information on water depth, underwater obstacles, seafloor, etc.

How Do Turtles Produce Different Sounds? Do They Have Vocal Chords?

As turtles do not have vocal cords like ours, they produce sounds by swallowing air and forcing it out of their lungs. This helps them make sounds that other turtles understand. They also produce lower frequency sounds, just like whales and dolphins.

Although we cannot hear their lower-frequency sounds, other sounds like hissing, singing, moaning, and clucking are audible.

They usually emit such sounds when they seek a mate, are in pain or call their hatchlings.

Yes, baby turtles do make noise, which is like a soft squeal. This is because they communicate with each other even during the embryonic stage. This helps them time their hatching period and come out simultaneously, so the predators can’t single out any of them.

Do All Turtles Make Noise?

Yes, all turtles can make noise, and they do it very often. However, for the longest time, humankind thought of turtles to be incapable of producing any sound.

Yes, red-eared sliders can make noise. They create noise in several circumstances like when in danger, mating, suffering from respiratory infections, due to injury, etc.

Captive red-eared sliders are known to gurgle and ask for food from their owners. This sure is a fun sight to watch.

What Sound Does A Snapping Turtle Make?

Snapping turtles are one of the loudest turtle species we know. They will hiss even when we gently pet them. Unlike red-eared sliders, they are solitary animals and territorial.

They do not even like to share their domain with other snapping turtles, let alone turtles from different families. They will hiss as a first and final warning. If the incomer persists, they will use their jaw’s prowess.

What Sound Does A Yellow-Bellied Turtle Make?

Yellow-bellied turtles will make normal turtle sounds like a red-eared slider and other pond turtles. They can hiss, cluck, groan, grunt, whistle, etc., depending upon their situation.

What Sound Does A Box Turtle Make?

Box turtles are one of the most social turtles we know. They produce sounds to communicate with other box turtles. They cry, burp, fart, groan, moan, sing, whistle, etc.

Can Turtles Understand Us?

Although turtles are intelligent beings, they find it hard to understand our commands – unlike dogs and cats. However, they can distinguish the tone and different sounds we make.

Turtles mostly rely on sight and smell rather than hearing. So if they see you coming, they might be conditioned to think that you will feed them. They may then wiggle their tails or show affection towards you.

Their eyesight is quite sharp, and they can see more shades of red than us. This is why turtles can distinguish between other people and their owners quickly. They will let you pat and caress them while they might hiss at your friends.

Can Turtles Communicate With Us?

Some turtles have been found to communicate, like gurgling, when they are hungry. Your turtles will also moan and cry when they are suffering from injury.

But not all turtles are as articulate as we would like them to be. And, this can be a communication barrier between you and your pet.

Are Turtles Able To Hear Us?

Yes, turtles can hear and distinguish the tone of speech in our voices. However, they are not able to understand the tone like dogs and cats do.

Despite the absence of vocal cords, turtles can still produce noises and communicate with each other. For example, they will make sounds when hurt, hungry, agitated, and trying to find a mate.

Furthermore, baby turtles can produce sounds even in the embryonic stage. This is a marvel on its own.

Before, turtles were thought to have no hearing and speech ability, but many new findings have suggested otherwise. They are perfectly able to hear and distinguish our sounds too.