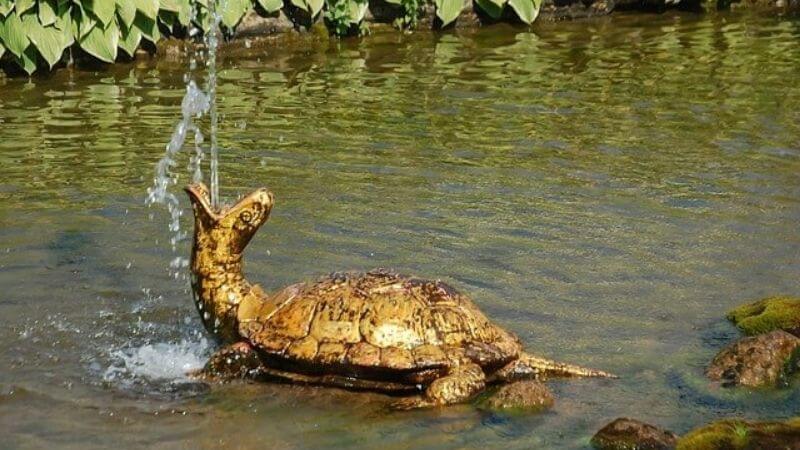 Captive turtles often won’t eat the foods that you give them on land. That’s because turtles need water to swallow their food. So you are doing it wrong if you are offering food on the ground or in their basking area.

Although aquatic turtles need water to swallow food, that’s not the case for all turtles. This phenomenon is the result of years of evolution. You will be surprised by the revelations that you will read in this article. So let’s begin.

Do Turtles Need Water To Swallow?

Papillae stimulate glands which then provide moisture inside a turtle’s mouth. However, aquatic turtles lack these, so they have to go inside the water to swallow food. So even if you put food on the land, they will grab it and dive underwater to swallow.

Freshwater turtles and sea turtles need water to swallow, whereas semi-terrestrials and land turtles like tortoises do not need water to gulp their food.

Why Turtles Need Water To Swallow?

Most aquatic turtles lack distinctive lingual papillae and poorly developed glands to secret mucus. Without the mucus (buccopharyngeal mucosa), turtles can choke on the food due to dryness in their pharynx, which can be fatal. So, turtles go inside the water to hydrate their papillae which helps with swallowing food.

In case you are wondering what papillae are, they are the little bumps on the top surface of our tongue. In our case, they have taste buds, whereas, for turtles, their purpose is different.

In animals, papillae help with moisturizing their tongue. For example, dogs use papillae for licking and healing their wounds, whereas cats use them for grooming.

Different species of turtles have different kinds of papillae. Their evolution based on their habitat is the reason behind the transformation of their papillae.

First, we discuss the highly aquatic turtles. These turtles have smooth mucosal surfaces which lack distinctive papillae. Along with that, they have poorly developed palatine glands – mucus-secreting glands. This is the reason they need water to swallow food. Turtles like sea turtles fall under this group.

Next is the semi-aquatic group. These turtles have short glandular papillae with a simpler mucosal surface. These turtles, too, need water to swallow their food. Turtles like clemmys guttata, which display both terrestrial and semi-aquatic traits, fall under this group.

The third group consists of terrestrial turtles like tortoises. They have longer papillae which are comparatively more muscular than other turtles.

Other Uses Of Tongue In Turtles

In the past, researchers believed that the turtles’ tiny tongues were underdeveloped organs. However, now with the development of electron scanning microscopes, scientists have come up with newer and surprising findings on turtles’ tongues. When closely researched, the tiny tongue had more than what meets the eye.

One such fine example is the common musk turtle. Unlike other turtles, these turtles have thicker skin and do not have cloacal bursae. This means that cloacal respiration isn’t a viable option for breathing underwater. So they use their tongue to respire while hibernating underwater.

It might come as a surprise, but turtles have been using their tongue as bait to catch fish. Alligator snapping turtles camouflage themselves by lying in the muddy river beds and wait for passing fish with their mouths open. Then, they will waggle their tongue and replicate the worm’s movement to lure nearby fish. And once a fish falls for this trick, it will be too late for him to escape.

Do Tortoises Need Water To Swallow?

Unlike turtles, tortoises do not need water to swallow. Instead, they have distinctive papillae with highly developed glands that secrete mucus which helps in eating. They have numerous long and muscular papillae that support their jaws during the twisting and turning of the food.

Do Turtles Have Taste Buds?

Most turtles have taste buds which they use for differentiating edibles and non-edibles. However, the degree of sensitivity of these taste buds is yet to be known. In addition, turtles often prefer some food to another, suggesting the presence of taste buds in their tongue.

Although the papillae are flat and underdeveloped, turtles do have taste buds in their tongue.

However, sea turtles do not have taste buds. This is why they consume both poisonous and non-poisonous jellyfish without having any harmful effects on their body. The same can be said for snapping turtles, who also happen to swallow foods that are otherwise considered poisonous.

Do Tortoises Have Taste Buds?

Some tortoises have taste buds, whereas some do not. This is because they have much complex papillae than both aquatic and semi-aquatic turtles. But this doesn’t mean that they have taste buds. Tortoises, lacking taste buds, will eat food without knowing whether it’s poisonous or not.

Final Words On Do Turtles Need Water To Swallow

Most turtles lack the distinctive papillae in their tongue to stimulate mucus secretion; thus, they cannot swallow food on their own. So these turtles need water while eating to avoid choking.

However, some terrestrial turtles, like box turtles, do not require water to swallow their food. Rather, they have tongues with developed papillae which secretes mucus while devouring their food.

So, if you have an aquatic turtle as your pal, try giving him food on the land to test whether he eats them right there or take it to his domain.

Aside from swallowing and handling of food during uptake, turtles’ tongues have several other uses too. For example, common musk turtles are found to use their tongue to exchange gases while hibernating.

And, findings such as snapping turtles using their tongue as bait to lure fishes are pretty impressive.