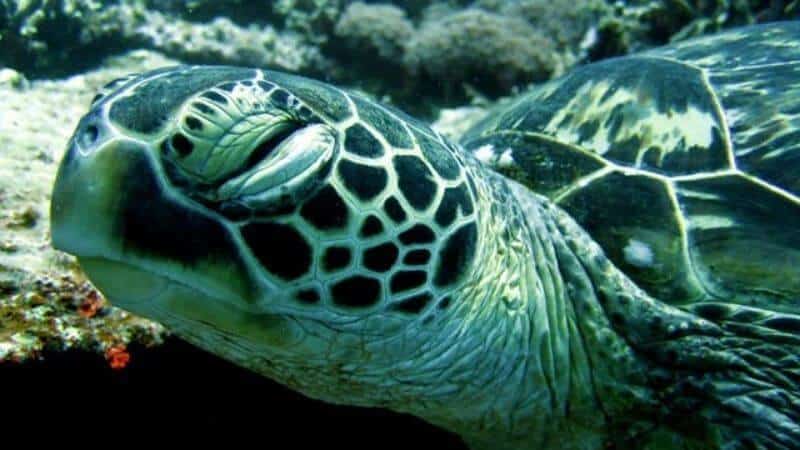 This world is full of fascinating animals with no eyelids to cover their eyes. So, have you wondered how they sleep if they do not have eyelids?

Do Turtles Sleep With Their Eyes Open?

No, turtles do not sleep with their eyes open. If they were to open their eyes while sleeping, the light would enter their eyes and activate neurons in the brain to keep them awake.

So, if your turtle is just staring into the horizon, it doesn’t mean he’s sleeping. He’s probably resting.

They not only have one, not two, but three eyelids. They have an additional membrane in their eye, a nictitating membrane that slides horizontally. This membrane protects your turtle’s eyeballs.

Another interesting fact about this nictitating membrane is that it is translucent – thus, it helps your turtles see partially even with closed eyes.

Just like with us, a turtle’s eyelids protect eyes from dust, dirt, harm, and overexposure to bright lights.

This is why you find turtles basking with their eyes closed when facing towards UV bulbs. Closing their eyes relaxes them and helps them get their much-needed sleep.

Why Is My Turtle Not Shutting His Eyes?

A turtle not shutting his eyes shouldn’t be something you should be alarmed about right off the bat. In fact, a healthy turtle doesn’t close his eyes often.

It’s the closed eyes you should worry about. But if your turtle isn’t closing his eyes, it could also mean that something is troubling him.

Here are some reasons your turtle isn’t shutting his eyes:

Turtles in stress do not sleep. They will be wide awake all the time. This usually happens if there’s a change in their environment.

They will be even more alarmed if other tank mates share the same space. So, give your turtle some time to acclimate to the new surroundings.

Too much brightness can cause your turtle to remain awake. If you have been turning lights on during the night, your turtle will find difficulty sleeping – thus, he has his eyes wide open.

As docile as turtles look, they have a curious side to them as well. They often venture around the tank inquisitively.

They will not rest until they discover every nook and cranny of their new habitat. Then, after they find their favorite place to hide, your turtles will calm down and rest.

You can see that there aren’t many reasons turtles open their eyes.

So, we will now move on to why turtles close their eyes all the time.

Why Is My Turtle Shedding White Skin? Is It Dangerous?

How Do Turtles Sleep?

Turtles sleep where they find comfort. Most aquatic turtles sleep underwater and on the basking platform.

They can sleep for about 4 to 7 hours underwater at nighttime.

But species like box turtles aren’t too fond of sleeping underwater. They find it difficult to swim in deep water, let alone sleep underwater. So they will lie on the basking area and rest with their eyes shut.

If you have turtles that sleep underwater, you need to provide them with ample space and a proper air pump.

The air pump will help to keep their habitat well-oxygenated at all times.

You will often find your turtles stretching their legs and necks while sleeping. Notably, it is a common sight on the basking platform.

Turtles try to expand their body to soak in as much heat as possible from the UV lamps. This is actually them increasing their body surface area to absorb UV rays.

Why Isn’t My Turtle Sleeping?

Turtles need rest. So, if your turtle isn’t sleeping, it could be because of reasons like high water temperature, infection, and diseases, too much noise, newer surroundings, and anxiety.

Turtles sleep for longer periods when the temperature drops too low for their liking.

But the higher temperature has the opposite effect. This means that your turtle cannot sleep and remains awake at all times.

A healthy turtle will complete his sleep cycle and remain active during the day. Yes, he will bask in the daytime but will also be equally involved in swimming and foraging.

On the other hand, an unhealthy turtle will lie in the corner and remain awake due to pain. So if you find your turtle not sleeping even after meeting all other prerequisites, like proper feeding and suitable water parameters, take him to the vet immediately.

Turtles can get afraid and stressed easily when there’s too much noise in the room. Loud noises will keep your turtle awake. So, please put them in a peaceful environment.

It would be best if you didn’t keep your turtle in a room where there’s too much inflow of people.

Lights On At Night

You shouldn’t keep your turtle lights on at night. Turtles aren’t nocturnal. Like us, they stay awake during the day and sleep at night. Having lights on during the night will deprive your turtle of getting sound sleep. Therefore you will see them awake when the lights are on.

Why Is My Turtle Sleeping All The Time?

A turtle seldom sleeps for an extended period. But if your turtle rests too much, it probably is because of the winter approaching, water temperature drop, or an underlying illness.

Turtles Sleep When They Sense Winter

Despite living in an enclosure, turtles can sense the change in the external environment. For example, they can distinguish changes in humidity, temperature, and air pressure.

So, when a turtle senses the onset of winter, it will begin brumation.

When in brumation, turtles can still wake up and move to eat and drink water. After replenishing their energy, they will again go back to sleep for days and weeks.

Turtles Sleep When The Water Temperature Is Too Low

Turtles need a water temperature between 72 to 82 degrees Fahrenheit. And if the temperature drops below that, turtles will show signs like sleeping for a longer period and being susceptible to illnesses.

You cannot tell for sure that water temperature will only drop during winter. It can happen in the autumn, summer, or spring, too. So it depends upon your region’s climate.

So, you need to ensure that you have a proper water heating system in place.

I trust Hygger products for my aquarium. Though they are a tad bit costlier than other brands, they are far more durable and provide better value for money.

Here’s a link to the heater that I use for my turtle tank:

Turtles Sleep When They Are Sick

Turtles sleep for a lengthy period when they suffer from illness. They show little to no movements and barely eat at all. They will find their hiding spot and cave in for days.

Some of the common illnesses in turtles are shell infections, vitamin A deficiency, respiratory infections, parasitic infections, and fractures.

Suppose you are sure that you’ve got everything right on your part, like maintaining the correct temperature, diet, and other needs, yet still the turtle is sleeping for a longer duration. In that case, seek medical attention immediately.

Water parameters and diet are two of the most critical determiners for a healthy turtle. Focus on fulfilling those requisites, and you will have an active turtle.

Turtles bask to help mobilize the calcium in their body. And when they haven’t been able to bask because of problems like not enough UV rays, they will become lazy and feeble.

A growing turtle will also be docile and sleep for a more extended period when they get fewer basking opportunities.

Ensure that both your turtles have enough basking area. Otherwise, you will see your turtles stacking or sleeping the whole day.

Check out this article to know three surprising reasons why turtles stack on each other.

How Long Do Baby Turtles Sleep?

Baby turtles sleep a lot less than adults. They sleep only about 4 hours a day. At this stage, they are always active and hungry. They will swim a lot – thus, they require plenty of food to match their activity. Babies do not really have a fixed sleeping schedule.

Most semi-aquatic baby turtles sleep underwater. At night, they come to the surface once every few hours to intake oxygen and go back to sleep.

How To Tell If A Turtle Is Sleeping?

While sleeping, turtles can both extend and retract their legs. Once they find a comfortable spot, they’ll doze off. A sleeping turtle will show slight movements if you poke him during his sleep.

Where Do Turtles Sleep?

Turtles sleep where they find comfort. Most like sleeping underwater, whereas some float and some sleep on the basking platform.

Turtles like red-eared sliders, painted turtles, and musk turtles sleep on both land and underwater. Snapping turtles bury themselves with mud and sleep under the shallow regions.

Unlike semi-aquatic species, box turtles like to sleep on land, especially in basking areas.

I usually find my turtles sleeping in places where I drop their food.

Do Turtles Close Their Eyes While Sleeping?

Yes, turtles close their eyes when they are asleep. However, turtles have translucent eyelids, enabling them to see what’s happening despite closing their eyes.

Do Turtles Sleep With One Eye Open?

Yes, turtles can sleep with one eye open. This enlists them with dolphins, alligators, and other reptiles. Dolphins do it to stick together with their groups. But, the same cannot be said for turtles.

Final Words: Do Turtles Sleep With Their Eyes Open

Turtles have three eyelids, and they do not sleep with their eyes open. Eyelids help them limit the amount of light that passes into their eyes.

So, they have to close their eyes while they sleep. Eyelids also protect them against dust and other harm.

Sleep is essential for turtles. So if you find your turtles losing sleep, you need to address this immediately and find out the reasons behind it.

Turtles cannot sleep with their eyes open. So, do not mistake a sleep-deprived turtle for one sleeping with eyes wide open.

What To Do If A Turtle Lays Eggs In Your Yard? Will They Hatch?