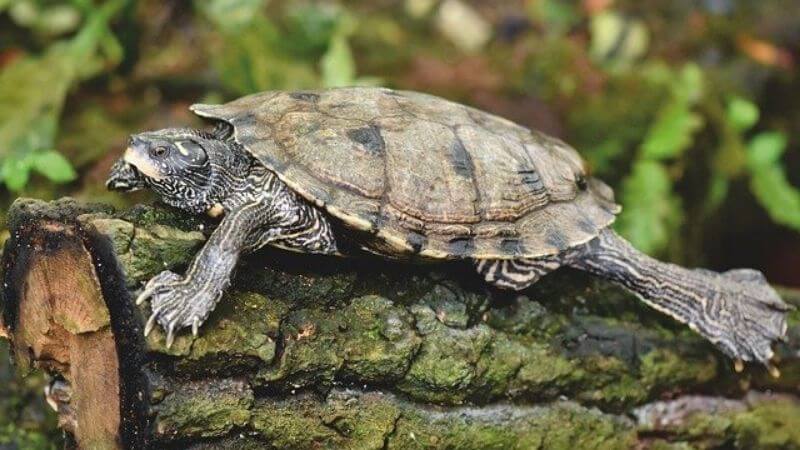 One night I heard peculiar sounds coming from the turtle tank. At first, the sound wasn’t disturbing, but soon it grew noticeable.

So, I went to check Pablo’s habitat. And I found that he was the one making such noises. But the sound wasn’t too loud to keep me awake (yes, I’m a sleepyhead), so I went back to sleep.

The following day, I thought about the noise. It made me wonder if my turtle was snoring for real or had difficulty breathing due to respiratory infections – thus, making peculiar sounds.

So, I took my turtle to the vet to see if there was any problem with my buddy.

After a thorough examination, the vet told me that my turtle was fine in every aspect. Feeling relieved, I went full geek (or you could say herpetologist) and scavenged about snoring in several turtle forums.

But if they produce sounds like whistling or crying, followed by mucus discharge and white films on the eye, it could mean that your turtle is sick and could be suffering from a respiratory infection. Seek medical attention as soon as possible.

Here’s a video of a tortoise snoring. This is precisely how turtles snore, too.

So, Why Do Turtles Snore?

Turtles breathe through their cheeks. Just like us, they have soft tissue in their airway. And while breathing, the air flows through these relaxed tissues causing them to vibrate and produce sound. This is why turtles snore.

Is Obesity Linked With Turtle Snoring?

Obesity is often linked with snoring because it is medically affirmed in the case of humans. However, the same cannot be said for turtles. Enough research is yet to be done on turtle’s snoring.

So, there is no substantial ground to corroborate the hypothesis linking obesity with snoring in turtles.

Snoring doesn’t necessarily indicate illness in a turtle. However, if it produces labored sounds, followed by other respiratory infection symptoms, it may be suffering from sleep complications or respiratory problems.

Some people have reported that their turtles produce whistling noises while sleeping. Usually, such sounds are produced when turtles suffer from a respiratory infection.

But sometimes, turtles leaning and snoring near the tank glass could also produce whistling sounds.

If you are confused about whether your turtle is snoring or suffering from an illness, you need to look for other symptoms.

A sick turtle suffering from respiratory infection can show symptoms like:

Why Is My Turtle Whistling While Sleeping?

What Other Noises Do Turtles Produce?

If you want to know what these particular sounds produced by turtles mean, check out my article on Do Turtles Make Noise? What Sound Does A Turtle Make?

Yes, turtles dream, too. It might come off as a surprise, but they experience a REM-like (rapid eye movement) state when asleep.

Have you ever dreamt about turtles? If you have, here’s an article to let you know the meaning behind seeing turtles in your dreams.

Turtles are diurnal species; they sleep at night and remain awake during the day. They sleep for about 4 to 7 hours a night.

You might have seen turtles sleeping during the daytime. Be mindful that they are resting, not in a deep sleep. Turtles often rest with their eyes closed while basking. They retain heat by stretching their necks and legs to get enough UVB rays.

Do Turtles Snore During Hibernation?

Turtles adopt a different breathing technique when in hibernation. The normal breathing through cheek and dewlap, also known as buccal pumping, doesn’t help them breathe underwater for a longer period.

This basically means that turtles do not inflate their lungs by breathing through their cheeks. Thus, they do not produce snoring sounds during hibernation.

Turtles instead respire through their cloaca (excreting organ) during hibernation.

Did you know turtles breathe through their buttholes when in hibernation? Read more to know about this bizarre technique: How Do Turtles Breathe? Butt-Breathing To Living Without Oxygen!

Final Words On Do Turtles Snore

Like me, my girlfriend, and my dog, turtles snore, too. They snore in the same manner as we do. Even the sound is similar.

However, you need to make sure they are just snoring or having a hard time breathing due to respiratory illness.