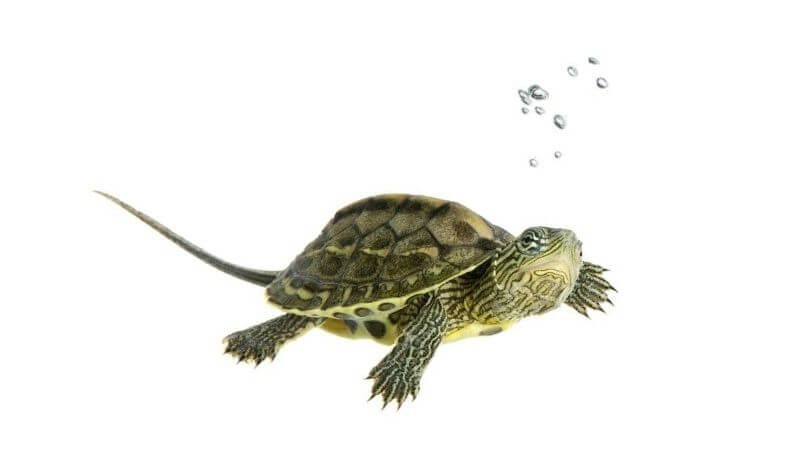 Almost every day, I receive messages from fellow pet owners who face some kind of trouble with their turtles.

While sorting through these messages, I encountered so many queries with similar problems. Many of them were from turtle owners worried about their turtles throwing up.

Do Turtles Throw Up?

Yes, turtles throw up when their digestive system doesn’t agree with the type of food they consume. Bigger chunks of food that are hard to swallow also cause turtles to throw up. Similarly, turtles often choke and vomit when they eat rocks and pebbles.

Turtles throw up white string-like substances along with undigested food.

Why Do Turtles Throw Up?

There are several reasons why turtles throw up. Some of them are:

Overeating is the primary cause behind most cases of turtles puking. If the turtle has been overeating, it will eventually puke after half an hour or while it is eating.

So, you should only feed a moderate amount to your turtle. Make sure you aren’t underfeeding or overfeeding.

Generally, a baby turtle is more voracious than an adult turtle. So, it will beg for more food every time it sees you. However, do get swayed as this results in overfeeding and your turtle throwing up.

You can feed a turtle based on the size of its head or how much food it can finish within 15 minutes.

Not all food is safe for turtles, especially those they do not find in their natural habitat. Thus, feeding such food can cause digestion problems.

Indigestion in turtles can be triggered by many factors. Some of them are:

Turtles do not have the enzymes required to digest dairy products. Feeding dairy products can upset your turtle’s stomach, and the food comes out undigested.

As turtles are lactose-intolerant, feeding dairy products can result in vomiting and diarrhea.

Although protein is necessary for a baby turtle’s development, sometimes it can backfire when you overfeed protein-rich food.

A protein-only diet isn’t a balanced diet for turtles. Not only does excess protein in their diet result in vomiting, but it also causes terminal diseases like pyramiding.

So, you need to mix both meat-based and plant-based food in your turtle’s diet.

If you notice your turtle throwing up, it is recommended that you stop providing a meat-only diet. Stick with regular pellets.

And if your turtle doesn’t show any interest in eating pellets, try soaking the pellets in tuna water. That should do the trick.

Turtles Vomit When The Food Pieces Are Too Big

Unlike us, turtles directly swallow their food instead of chewing. And when the food pieces aren’t small enough to be gulped in a single intake, they will choke and vomit.

Turtles Throw Up When They Swallow Rocks.

It is common for turtles to swallow rocks in a tank. Most of the time, the stone is excreted with the stool. But, sometimes, the bigger rocks can get lodged in their throat, and they have to regurgitate it, hence the puking.

Here’s a clip of a snapping turtle throwing up:

Worms In A Turtle’s System Will Also Cause Them To Throw Up.

Worms like nematodes and their eggs can also cause turtles to throw up. These worm eggs can hatch and mature inside a turtle’s system. They will reside in a turtle’s stomach and grow, as well as multiply.

And when your turtle is infected by these worms, it will become ill and show symptoms like:

So, you need to take your turtle to a vet immediately. Your veterinarian will likely administer fenbendazole if worms are the culprit behind your turtle’s frequent vomiting.

Dehydration Can Also Cause Turtles To Throw Up

A dehydrated turtle will choke and have trouble swallowing food. If the turtle attempts to gobble up its food outside water, it will likely choke and throw up.

So, know the reasons behind dehydration in turtles. It could be illness, wrong water parameters, lack of clean water, or poor diet.

Turtles New To A Tank Can Also Throw Up

Turtles get anxious in a new environment. They need time to adapt to newer surroundings. While doing so, they might gobble up unusual things inside the tank that can disrupt their bowels.

Commonly, the turtle new to its surroundings will ingest substrate and wastes produced by other tank mates. This can also cause vomiting in a turtle.

Turtles Throw Up When They Ingest Poisonous Plants

Not all plants are safe for consumption. Plants toxic to your turtles can cause vomiting. Some of these plants even cause intestinal damage.

Plants that aren’t safe for turtles to consume are:

Vitamin A deficiency in turtles is the result of feeding an inappropriate diet. Overfeeding iceberg lettuce, an all-meat diet, and inferior quality pellets is the cause of this nutrition deficit.

Vomiting is just the tip of the iceberg. Turtles lacking vitamin A will suffer from hypovitaminosis A, skin-related problems, as well as respiratory tract, kidneys, and eyes complications. It declines the overall quality of life.

Turtles suffering from vitamin A deficiency will show symptoms like:

What To Do When Your Turtle Throws Up?

First, remain calm and do not make decisions in haste. Monitor how frequently your turtle throws up. If it happens only once, you need not worry because turtles often go back to being normal after vomiting.

However, if it happens more than once, you should immediately take it to the vet.

You should do the following in case your turtle vomits:

If the vomiting is occasional, you should know that something is wrong with the tank setting or the food you are providing. The latter is the felon in most cases.

You should know what foods to serve daily and what foods to use as occasional treats. Stress on regular pellets and veggies, the ones that provide all-round nutrition to your turtles.

Signs Of An Overfed Turtle

Generally, overfeeding is often the number one cause behind a turtle’s vomiting. So, you should regularly monitor to see if your turtle is being overfed.

Here are some signs of an overfed turtle:

Do Sea Turtles Throw Up?

Yes, just like freshwater turtles, sea turtles throw up, too. Sea turtles forage on every kind of plant that grows on the seabeds and will regurgitate if they happen to overeat it.

For example, Hawaiian green sea turtles graze on red limu blooms. Then they go to the beach and throw up the red seaweed, which looks like blood but isn’t.

Final Words: Do Turtles Throw Up

Turtles aren’t picky eaters, so we turtle owners become happy when our turtles enjoy devouring anything we serve them. However, this also has its repercussions, like overfeeding.

So, this further leads to complications in their digestive system and ultimately organ failure. Feed moderately and know what food to provide to prevent such a disaster.