Do Box Turtles Bite? How does it feel like? 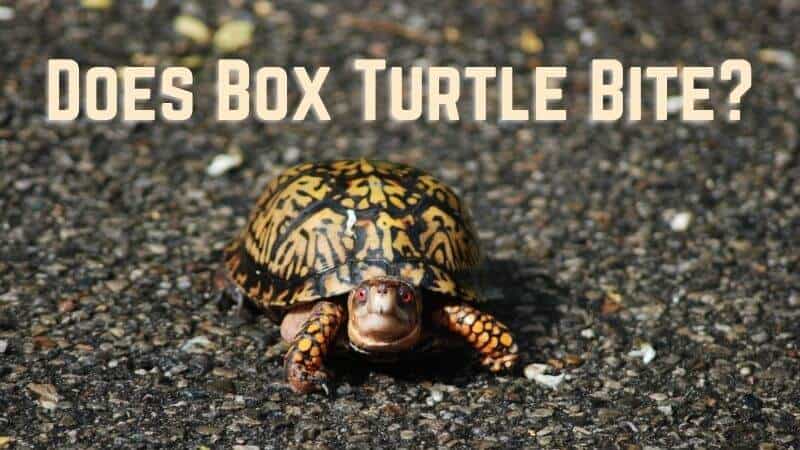 Box turtles are beautiful, low-maintenance, and don’t grow too big. These are a few reasons they’re so popular as pets in the United States. But what about their temperament? Do they bite? How dangerous is their bite?

Yes, a box turtle can bite if it feels threatened and wants to defend itself. Box turtles are known for their friendly personality, but they can snap, hiss, and bite if they think they’re in danger. An adult may not find the bite very painful, but the tender fingers of small children can sustain injuries.

Don’t worry. It isn’t as scary as it sounds. All animals attack back when threatened — it’s a natural reflex. And box turtles are no different.

Now that you know the answer to does box turtle bite or not let’s decipher the causes to understand this behavior better.

Box turtles aren’t an aggressive species like snapping turtles — so they don’t bite on a whim or over small matters. The main reasons box turtles bite are if they’re feeling unsafe or are being mishandled. Stress, hunger, and protection of eggs are three other reasons why box turtles bite their owners.

In 90% of the cases, this is the reason box turtles bite. They are docile but quick to attack when threatened. Now there could be several reasons behind this feeling. It could be anything from loud noise and change in environment to something as simple as guarding food.

If you transfer your box turtle to a new location, just be extra careful when handling as there’s a good chance you’ll get bitten.

Box turtles are prone to stress, triggered by factors like hunger, new environment, and territorial aggression. They also tend to get stressed around mating season over potential partners and competition.

So, if you see signs like hissing, panting, and retracting, know that your box turtle is stressed. Thus, it’s best to leave the turtle alone for some time before slowly addressing the reason.

Protection For Eggs And Hatchlings

No matter how sophisticated or primitive a creature, maternal instincts are strong in everyone. That’s why box turtles tend to get a bit defensive about their eggs and hatchlings. So, you should respect your turtle’s boundary during the postnatal period and give it plenty of space.

The urge to hold the hatchlings and care for them might be strong, but the mother turtle will not appreciate it and possibly bite you in defense.

Although not too expressive, box turtles can quickly figure out when someone’s being gentle or rough with them. If you are experienced and can gently hold and handle the turtle, it’ll be receptive to your gesture.

But if you handle roughly, meddle with the head and mouth area, and abruptly hold it, you’ll learn the lesson the hard way.

Now, this may seem unusual, but hear me out. A hungry turtle can sometimes mistake your finger for food and try to bite it. Also, an empty stomach can make your pet snappy and irritated. So, if you try to handle your turtle in that particular instance, it might try to bite you.

How Do Turtles Breathe? Butt-Breathing to Breathing Without Oxygen: A Turtle’s Unique Respiratory Abilities

Do Box Turtles Bite Each Other?

The answer is ‘yes’ once again, but they don’t bite without reason, as I stated above. Famed for their friendly demeanor, box turtles only resort to biting when pushed to their limits. So, if there are tendencies like territorial aggression in the tank, mating frustration, and limited resources, a box turtle may bite its tankmates.

From what I have seen, box turtles turn against each other primarily because of territorial aggression. Remember, turtles need a lot of space for themselves and quickly get anxious in congested environments.

So, if you think that’s the case with your turtles, you will have to upgrade to a newer tank or keep them in separate enclosures.

This 120-gallon tank by SC Aquariums is my favorite. I absolutely love its minimalistic design that doesn’t interfere with decorations.

And if you want to feed your turtles separately or give them dedicated alone time, this divider by Toyuto can be a good solution.

This transparent divider allows light transmission up to 92% and doesn’t hinder the tank’s appearance.

Do Box Turtles Have Teeth?

No, like all turtles and tortoises, box turtles don’t have teeth! They’re born with one tooth called the egg tooth, which they use to peck their way out of the shell. However, this tooth falls off soon after birth.

So, if you’re wondering how does a box turtle bite if it has no teeth, the answer may surprise you.

Box turtles have a flat beak they use for self-defense. If the beak grows long, it’ll extend down past the turtle’s jaw.

This Banquet Block by Zoo Med can help your wear down your turtle’s beak and maintain the length. That’ll help your pet avoid the stressful situation of having the beak trimmed.

Plus, since this block is enriched with calcium, it looks like an excellent toy for box turtles.

How Does A Box Turtle’s Bite Feel?

A box turtle’s bite is a lot less painful compared to other turtles. I’ve been bitten by a box turtle on a few instances before, and I must say, it isn’t too painful. However, the bite can be sharp enough to hurt or even inflict wounds on children’s fingers.

If your finger or toes are mistaken for food, box turtle bites aren’t too bad. If you have a reasonable pain threshold, there’s a good chance you won’t feel pain. The skin may turn pink for some time, but that’s all basically.

However, if they’re biting in self-defense, sometimes, box turtles won’t let go of your finger. And that can be pretty painful. You may end up with a bruise. If you notice blood or signs of the wound, you will have to visit the doctor to prevent possible infections.

Is A Box Turtle’s Bite Dangerous?

No, box turtles aren’t known to carry dangerous viruses or parasites in their saliva. So, in most cases, the bites aren’t dangerous, albeit a little painful. However, like most species, box turtles may carry Salmonella without showing any signs.

So, if there’s a wound or blood oozes out, don’t refrain from seeking medical advice. In humans, Salmonella can cause a severe illness called salmonellosis.

What To Do If A Box Turtle Bites You?

Unfortunately, if you get bitten by a box turtle, make sure to wash the area with mild soap and lukewarm water. Putting the bitten area under running water may help subside the pain. Next, use an antibiotic and cover the wound with a bandage.

When you get bitten by a box turtle, do not put it in its enclosure immediately. It’ll associate biting as good behavior and assume it’s being rewarded. Keep it in another compartment or safe area so that it cannot move elsewhere.

This sense of discomfort will discourage your box turtle from biting next time.

Even if the bite was painful, you’ll seldom end up with wounds or require stitches. But if you see the blood oozing or there’s a cut, you will have to make a trip to the doctor.

And once treated, you have to take great care so that it doesn’t turn into an infection. If the wound looks yellowish, stings, or produces discharges, ring up your doc immediately.

What Not To Do If A Box Turtle Bites You?

If a box turtle bites you and doesn’t let go, don’t pull or hit the turtle. That way, your stressed pet will only clench tighter. The best thing to do is get hold of your reflexes and patiently wait for the turtle to let go.

Also, once it lets go of your skin, don’t hit or give physical punishments. Your turtle won’t exactly be able to process why. In most cases, box turtles don’t bite until they’re forced to.

Reflect on the experience and ascertain why the turtle was triggered to bite. That’ll help avoid bitter experiences in the future.

Conclusion On Do Box Turtles Bite?

So, do box turtles bite? Here’s a short recap:

Yes, box turtles are capable of biting and even inflicting pain. However, they are not innately aggressive animals. So, box turtles only bite when they’re pushed to their limits.

Box turtles usually bite when they feel threatened or are being roughly handled. They can also resort to biting when extremely stressed, hungry, or are protecting their eggs.

But box turtles don’t have teeth. They bite with their flat beak, and thus, it’s not very painful.

In some instances, your turtle might not let go, and it can turn throbbing in a matter of a few seconds. So, if your turtle bites and doesn’t let go, don’t pull or hit the turtle as it’ll only hold on to the bite even more strongly.

And if there’s a wound or blood after the bite, you need to consult with your doctor. Simply treating at home won’t be enough because there could be underlying infections.