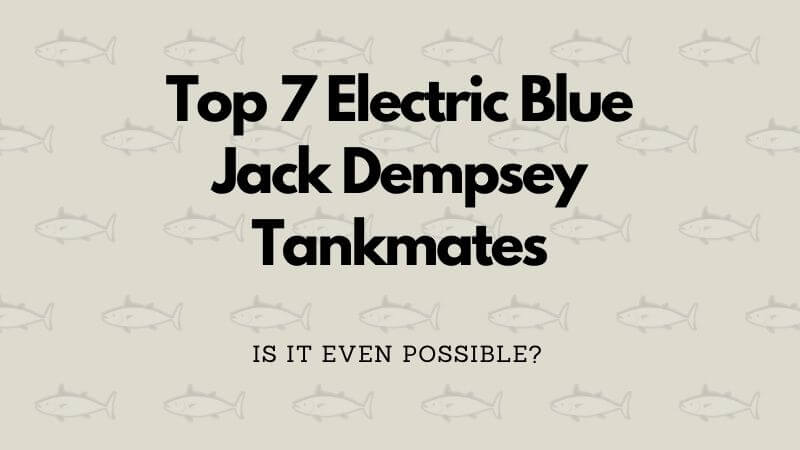 For a long time, it was believed that electric blue jack dempseys were a man-made species – a cross between the original Jack Dempsey and some other New World cichlid.

But today, the general consensus is that these brilliant-looking fish are naturally occurring variants of the OG Jack Dempsey.

They were named after the legendary American boxer Jack Dempsey. So naturally, they are fierce, aggressive, and every other adjective that describes hostile beings.

However, there’s a twist – the electric blue variants of Jack Dempsey have a comparatively subdued personality than the standard ones. They also are a lot smaller in size – reaching a maximum length of a little over 8 inches (20 cm).

So, although the rule of thumb is to stock aggressive fish with other feisty fish, you have to be a bit more careful when choosing electric blue jack dempsey tank mates.

You don’t want to pair them with fish that are too docile or too aggressive. Semi-aggressive fish is what you should be looking for.

So, without further ado, let’s dive right into the topic.

Severum cichlids are semi-aggressive fish. Thus, they should be only paired with fish of similar size and temperament. And luckily, electric blue jack dempseys share common traits with severums in terms of size and behaviour.

Severums aren’t too submissive or aggressive, making them ideal tankmates for your electric blue jack dempseys.

However, these fish can get a bit territorial and like to mark decorations in the tank. Thus, you need to ensure there’s ample space for everyone. In addition, their aggression level increases quite significantly during the breeding season. Also, they get very competitive with other males during this period.

Severum cichlids will try to devour any fish that’s smaller than them. So, you definitely don’t want to pair them with smaller species.

Convict cichlids have earned themselves a bad name for being aggressive. But I would say they are one of the most misunderstood fish in the aquarium trade.

These fish make great pets for a handful of reasons. The main one being their exciting and entertaining personalities. They’re almost comical, although they can get competitive and territorial.

Understanding what triggers a convict cichlid is necessary if you want to pair it with an electric blue jack dempsey. This fish needs lots of space, hideouts, and decors to claim.

In my experience, a convict’s aggression can be managed quite significantly if there is plenty of space in the tank and hideouts to retreat in.

As with every other fish, they get territorial and aggressive than usual during the mating season. Other times, they usually keep to themselves and investigate the different areas of the tank.

Giant danios are semi-aggressive and a lot more playful. It’s even easy to confuse their playfulness with aggression. In general, they are friendly and active. As a result, they will often chase around other fish in the tank.

This same behavior can sometimes be a source of harassment for smaller fish and annoyance for big fish. However, since electric blue jack dempseys are also semi-aggressive, this shouldn’t be a big problem if you keep them in the same tank.

Giant danios make great additions to any cichlid tank, as long as the cichlids in question are not too overly aggressive. You should always keep these fish in a school of half a dozen at a minimum.

Keeping them in smaller numbers can result in aggression towards other fish and even one another.

Black Spots On Parrot Cichlids? Your Fish May Have Been Dyed!

Firemouth cichlids are pretty affable fish as long as their demands are met. And these demands include ample swimming space, several hideouts, regular water changes, and a proper diet.

That being said, firemouths aren’t too good at handling stress. Thus, they need to carve out separate territories.

Also, they are not schooling fish. Instead, they go about their lives separately and defend their own territory.

Firemouths are one of the exemplary parents we know in the fish world. So obviously, they tend to get super possessive and intolerant of intruders during the breeding season. The males extend their gills to warn other fish to stay away from their territory.

They are pretty curious in terms of general behaviour – spending a lot of time investigating the tank and even occasionally digging.

Compared to other cichlids, acaras are a lot more peaceful. However, they do have a semi-aggressive side to their personality and are often seen bullying small fish. Luckily, electric blue jack dempseys are identical or a tad bigger than these fish.

Acaras will fare well with a wide variety of tank mates and will seldom cause any disturbances in the tank. This easy-going temperament, coupled with ease of care, makes them the perfect fish to keep in any community tank.

Acaras are naturally inquisitive fish. They often spend their time investigating different parts of the tank and digging. You’ll occasionally find them rummaging through the substrate to find something to eat when they’re hungry.

Acaras are also known to uproot the plants and topple decors – so, make sure you anchor everything to the substrate securely.

As far as swimming goes, it’s a healthy mix of hiding and swimming around.

Angelfish are inherently semi-aggressive fish with a complex social hierarchy among themselves. In general, they are not too hostile towards other fish but can be aggressive towards each other – especially when attempting to form a pair or mate.

Also, they’re pretty opportunistic and will try to eat anything they can fit inside their mouth. Luckily, electric blue jack dempseys are considerably bigger than angelfish.

Angelfish are also naturally territorial. Aggression is simply how they communicate their hierarchy in the tank. And if you conduct frequent water changes, it will reset the social tanking, and they may once again resort to fighting and nipping to re-establish their position.

They also tend to get territorial and fierce towards the mating season, but that applies to practically every other species.

Angelfish also often get angry if they don’t receive enough food. So, make sure you’re watching the quantity, but don’t go overboard and overfeed. Otherwise, you’ll have to change the water more frequently.

Don’t go by the name. Rainbowfish can be pretty aggressive. They may have the prettiest appearance, but there’s more to this fish than what meets the eye.

Rainbowfish are perfectly capable of cohabitating alongside electric blue jack dempseys as they’re able to hold their grounds perfectly if there’s ever a showdown.

If you have more than one rainbow fish male in the tank, you are simply asking for trouble. The power play will continue until there are a couple of fallen soldiers.

The key to moderate their aggression is ensuring there’s tons of space for everyone, complete with hiding areas to take refuge in.

The males tend to get even more fierce and competitive during mating season. Thus, don’t forget to keep just one male rainbowfish per tank.

So, that’s a wrap. When choosing tankmates for electric blue jack dempsey, always remember that these blue variants aren’t as big or aggressive as the standard jack dempsey cichlids.

Therefore, when choosing suitable tankmates, your best bet would be semi-aggressive species that aren’t afraid of jack dempseys but at the same time won’t terrorize them.

How Fast Do Firemouth Cichlids Grow? 4 Tips To Accelerate Growth!

How Fast Do Convict Cichlids Grow? 4 Ways To Speed Up Growth!

10 Types Of Flowerhorns You Need To Know!