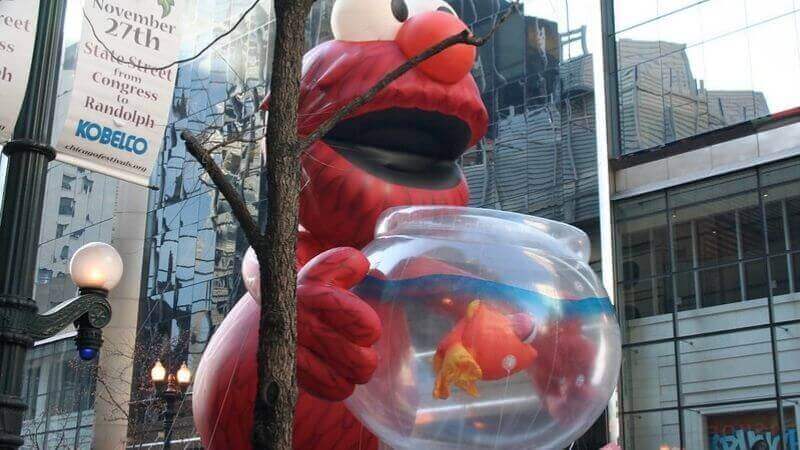 I was watching Sesame Street with my little niece a few months back. The episode we’re watching was particularly heartfelt as the plot involved Elmo adopting a beautiful little dog.

I guess that was my ticket for a trip down to Nostalgia Town.

And out of nowhere, Elmo’s pet fish popped into my mind.

“What Is Elmo’s Fish’s Name?” I typed into Google. I definitely found the answer – but along the way, I also came across some exciting trivia about the pet fish.

I’ll tell you all about it!

What Is Elmo’s Fish’s Name?

Elmo’s fish’s name is Dorothy. And Dorothy is a goldfish. She first appeared on the “Elmo’s World” segment of Sesame Street in 1988.

Unlike other characters in the show, Dorothy isn’t portrayed by a puppet. Instead, they had a real, breathing goldfish (possibly multiple goldfish over the course of the series).

According to Sesame Workshop’s executive vice president, Kay Wilson Stallings, “Elmo has done quite well taking care of his goldfish.”

What Kind Of Goldfish Dorothy Was?

Over the years, many different goldfish graced the screen as Dorothy. Reportedly, in one of the episodes, Dorothy is initially a comet goldfish. And in the very next scene, the comet was replaced by a fantail.

How Many Dorothys Does Elmo Go Through?

A good number of fish were used each season. And surviving fish were given good homes afterward. That’s reassuring!

In the show , Dorothy isn’t represented by a muppet but a real, live goldfish. However, Dorothy has a beautifully feminine appearance when described in books or merchandise, thanks to her luscious, dark eyelashes.

Dorothy is around six years old (in goldfish years). And she is among Elmo’s best friends.

Elmo could understand what Dorothy was saying through her fishbowl. (By the way, we don’t condone the use of fishbowls at Urban Fishkeeping!)

Dorothy is known to be a curious fish. She has an active imagination.

Whatever topic is being explored in the show, Dorothy mentally visualizes a version of Elmo in an appropriate form or role.

Why Did Dorothy Not Speak?

According to the show’s makers, Dorothy, alongside the members of the Noodle Family, didn’t speak to allow Elmo to do all the talking. The intention also was to give children the chance to respond to what was happening on the screen.

In a sense, you can say Dorothy’s silence enabled children to fill in the blanks.

And her curiosity, often created and enhanced by Elmo’s imagination, helped the makers insert curriculum lessons they wanted to convey.

Dorothy first made her appearance in 1988 on Elmo’s World. However, she also appeared in the main Sesame Street storyline on many occasions, starting the same season – therefore, asserting her independent existence outside Elmo’s imagination.

Here’s a shortlist of a few episodes where Dorothy played a key role.

How Many Pet Fish Did Elmo Have?

After 9 years, Elmo had another pet fish named Bubbles, who unfortunately died, causing Elmo a lot of despair.

Miles and Telly give him another goldfish to cheer him up in the same episode. It was his third fish and was named “Miles-Telly.”

What Happened To Elmo’s Goldfish?

Elmo’s goldfish Bubbles passes away, causing Elmo immense grief. He was then gifted another goldfish by Miles and Telly, whom Elmo aptly named “Miles-Telly.”

What Other Pet Does Elmo Have?

Besides pet fish, Elmo has a brown-and-white, floppy-eared puppy named Tango who loves to dance. Tango is described to be “spirited, adorable, and adventurous.”

Tango was found wandering the streets and eventually adopted by Elmo and Grover in the animated origin story.

What Is Elmo’s Dog’s Name?

Elmo’s dog’s name is Tango, and she loves to dance!

Elmo’s pet fish’s name is Dorothy. Dorothy is a goldfish.

Before Dorothy, Elmo had 3 other pet fish named Barkley, Bubbles, and Miles-Telly.