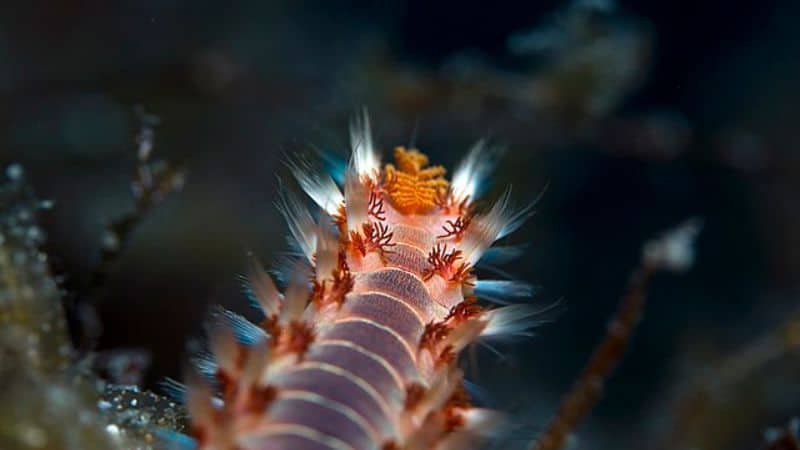 I’m not a vain person, but I think bristle worms pretty much top the list of the ugliest, creepy little creatures. I know you second my thought – I guess we are just hardwired to get crept by millipede-like invertebrates.

But do you know bristle worms aren’t as harmful as they look? As a matter of fact, they can clean after your fish and act as personal maids.

Nonetheless, they look ugly and breed like crazy. These two reasons are more than enough to eliminate bristle worms that love to hide under live rocks.

So, this article will shine a light on some fantastic fish that eat bristle worms.

Let’s begin without any further ado!

Neon dottybacks grow only around 3.5 inches long, but they sure do love a meaty diet. They have a solid reputation for feasting on bristle worms in the tank.

However, once the bristle worm population in your tank dwindles, don’t forget to fortify their diet with treats like mysis shrimp, brine shrimp, and krill.

Otherwise, they’re known to go after other innocent invertebrates in the tank.

Like neon dottybacks, orchid dottybacks make excellent hunters to feast on bristle worms. Reportedly, it’s not at all uncommon to see white bristle spines protruding from their faces.

However, this doesn’t seem to bother or stop them from going after these nasty worms again in the future.

During my research, I came across several hobbyists who swore by orchid dottybacks when it comes to suppressing the bristle worm population in the tank.

These fish grow around 3 inches long and are known for their semi-aggressive demeanor. They’re pretty territorial too.

Thus, if there are bristle worms present in your tank, orchid dottybacks will definitely go after them.

Flame hawkfish are semi-aggressive, reef-safe fish that love to attack small invertebrates. Thus, they’ll naturally go after bristle worms if there are any in the tank.

One hobbyist on a forum reported that a flame hawkfish single-handedly took care of bristle worms as well as fire worms present in the tank.

These fish grow around 4 inches long and are as hardy as they come.

Despite their petite size, these fish are hardcore carnivores. Therefore, they need to feed on sessile invertebrates and small crustaceans regularly.

Therefore, once the bristle worm infestation problem in your tank is solved, you should fortify the fish’s diet with occasional live, meaty food. Otherwise, there’s every chance they will turn on your tank’s invert residents.

Longnose hawkfish are just as effective as flame hawkfish when it comes to snacking on bristle worms. They love it.

These fish grow slightly bigger than flame hawkfish, reaching around 5 inches long on average. They are carnivores that primarily snack on small fish and shrimps.

So, if the bristle worm supply in your tank runs out, these predatory fish will naturally look for opportunities to snack on your tank’s resident shrimps, snails, and even smaller fish.

As fish that hunt around the rocks and sandy surfaces, melanurus make excellent eaters of bristle worms.

They can legit pull the worm out of different surfaces and gobble them in one go. That’s impressive!

Melanurus wrasse grows around 5 inches long. And they have an aggressive demeanor. Hobbyists report that these fish can snatch up cleaner shrimp in a matter of a few seconds.

So, you can be assured that they will go after bristle worms too.

In the wild, their diet consists of smaller crabs, shrimps, and snails. Therefore, once they are done eating bristle worms, they will try to eat the rest of the inverts present in the tank.

So, you need to keep them full and happy at all times!

I browsed through several forums to look for answers for fish that eat bristle worms, and the fish that was recommended the most was none other than six line wrasse.

I am not exaggerating! Literally, it was like every second hobbyist pointed towards six line wrasse.

Much like melanurus wrasse, they frequent live rocks and sand where bristle worms like to hide. And once they spot one, the game’s over for the little worm.

Although six line wrasses are nano fish that don’t grow any bigger than 3 inches, they pack a feisty temperament. They bully pretty much everyone smaller or slower than them.

But luckily, they don’t bother corals, anemones, and sponges.

Six line wrasse may be the most popular and effective hunters of bristle worms, but you still should not expect a single specimen to rid your tank of these pests entirely.

Coris wrasse is yet another fine member from the wrasses family that loves to hunt bristle worms. But there’s a catch.

From what I have heard, these fish only tend to go after smaller worms. Now, this can be an advantage and a disadvantage at the same time.

The obvious advantage here is that they’ll go into unreachable nooks and crannies to hunt down smaller worms.

And the disadvantage is that they may leave the big guns alone, who will reproduce at an astounding rate.

If I were to give my two cents, I’d suggest getting six line wrasse instead of coris wrasse. Although the latter are bigger and look fiercer, they’re a bit less effective at annihilating bristle worms.

There’s one more fish that is known to eat bristle worms, and that is copperband butterflyfish. However, I’d recommend against raising one to new hobbyists since they make picky eaters.

On top of that, they’re not really suited for a reef tank.

So, that’s a roundup of the top 7 fish that eat bristle worms.

All these fish mentioned above are known to actively hunt down bristle worms or any other kind of worms. But when it comes to biological measures like these, success isn’t always guaranteed.

Even if you raise a couple of six line wrasses that are deemed most effective in controlling the worm population, the result may vary. Things can go south pretty quickly.

Sometimes, the predator decides it is just not interested in eating the bristle worms even though polychaetes are part of their regular diet in the wild. Other times, they do a half-baked job – only picking at the worms as a leisurely, occasional snack instead of hunting them down as a full-course meal.

On the flipside, your predator fish may do an excellent job of hunting down the bad worms. But that means there’s a good chance that they will also go after desirable crustaceans and inverts.

And lastly, if you’re only planning to add these species for pest control, you will need to create a meal plan for them once the bristle worms are all dead and gone.

What will you do with these fierce fish who now have developed an appetite for live, meaty snacks?

Below, I have accumulated a few answers from forums on the topic of what fish eat bristle worms. Have a look!

“I once had a longnose hawkfish that kept the bristle worm population under control.”

“My dusky wrasse eats most pests, including bristle worms. It has been doing so for the past 6 years I’ve had him.”

“Once I watched a small bristle worm float past my six line wrasse. It got eaten by one of the clowns.”

“I have flame hawkfish that took care of the bristle worm problem as well as the fireworms.”

Besides the fish mentioned above, arrow crabs and boxer shrimps do an excellent job hunting down bristle worms. However, you should plan for long-term rehabilitation of these ‘predators’ once the job is done.

From what I have read on forums, arrow crabs reportedly go after bristle worms like it is their only goal in life. However, there’s one little hiccup. They’re also known to go after slow-moving fish and shrimp.

Also, note that arrow crabs are opportunistic feeders. Thus, if they’re hungry, they might go after something you don’t want them to.

Bristle Worm Trap – How Does It Work?

Traps are one of the most effective ways to put a full stop to your tank’s growing bristle worm population. You can buy a trap at the local fish store.

You need to keep the traps at the bottom and place some kind of bait inside them like raw scallops, cooked shrimp, fish, and clams and wait for the traps to fill.

Wait 1-2 days and see if the traps have caught any bristle worms. In most cases, they will. Next, remove the worms and dispose of them safely as you wish.

Remember that finding a trap that works properly involves trial and error. Of course, if you wish, you can always try making your own homemade traps.

However, gauging by the amount of time and materials required to make a trap, you are probably better off buying one.

How Do Bristle Worms Get In?

Bristle worms get in the tank by hitchhiking on plants, corals, rocks, and decors. Therefore, it’s absolutely crucial to quarantine everything that goes inside your reef tank.

What fish eat bristle worms? I’d put my money on six line wrasse. A lot of people have recommended this fish on forums too. Besides them, some other fish that eat bristle worms are orchid dottybacks, melanurus wrasse, and flame hawkfish.

But remember – each fish is different, and each situation is different. Sometimes, the predator dish mentioned above will relentlessly pursue bristle worms, and sometimes they just won’t.

You might also end up with opportunistic fish that will devour a bristle worm crawling right in front of it. But the same fish may not go out of its way to find and eat one.

Are Sponge Filters Good? 7 Reasons Why!