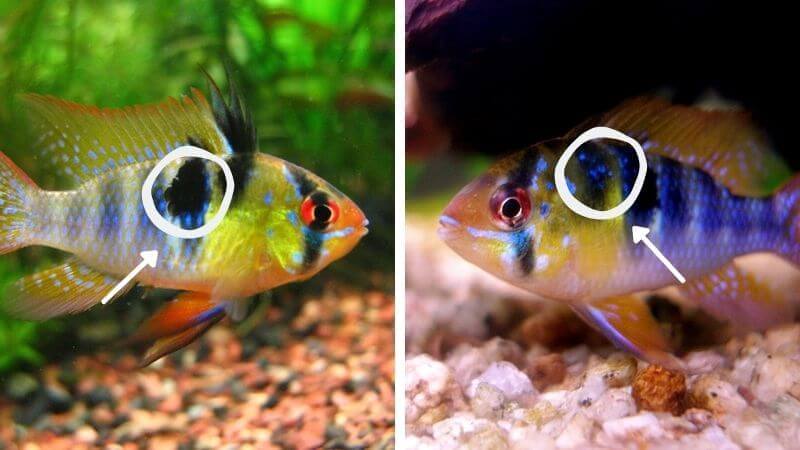 German blue rams are the stunning color morphs of the typically found blue rams. Thanks to their beautiful colors and cheerful temperament, they’re widely sought out in the aquarium hobby. If you’re thinking of breeding german blue ram cichlid males and females, there are quite a few things you should know.

These fish display super subtle sexual dimorphism. You can’t tell apart a male and a female right off the bat. But luckily, if you have keen eyes and a bit of patience, there are a few tricks you can pull.

In this blog, I will tell you about the 9 whopping ways you can differentiate german blue ram cichlid males and females!

The Spot Under The Dorsal Fin

This is the most obvious difference. Both males and females have a black mid-lateral blotch right below the dorsal fin. In males, this blotch is almost opaque black. In females, the blotch is topped by bright blue, iridescent spangles.

You have to channel a bit of patience while looking for this difference. The angles and the tank’s light may make it a bit tricky to distinguish.

Males Are Bigger Than Females

Male German blue ram cichlids can easily grow over 7 cm (2.7 inches) long. On the other hand, females are a tad bit smaller. They only grow around 5 cm (2 inches) in length.

Females Have A More Rounded Body

Males Have A Rounded Forehead

The Pectoral Fins Are Different

Female German blue rams have a lot shorter pectoral fins. In contrast, a male’s pectoral fins almost extend to the point where the tail meets the body.

Shape Of The Dorsal Fins Is Different

As it is with most cichlids, males have longer and more pointed dorsal fins than females. However, in German blue rams, there is another interesting difference.

Males Are Have Richer Colors Than Females

In most fish, males have more intense colors than females. This is the case for German blue ram cichlids too. However, the coloration also depends mainly on the fish’s health and diet.

So, this isn’t really the surefire way to tell them apart.

Bellies in females turn a pretty shade of pink – almost purple – during the breeding season. However, male bellies retain their original color.

This difference is only visible when the fish prepare to spawn, but this is among the most surefire way of telling them apart – second only to the spot beneath the dorsal fin.

A female’s breeding tube (also known as ovipositor) is short, wide, and stubby. The tip looks like it has been sliced off.

A male’s breeding tube is thin, curved, and pointed. The length is greater than the width.

However, once again, this difference is only visible during the breeding season.

German blue ram cichlids sexually mature at a fairly young age. They are ready to spawn by the time they’re 4-6 months old. That’s a lot faster compared to other American cichlids.

For example, an oscar sexually matures at 14 months of age. Even then, some only get ready to spawn when they are 2-3 years old.

German blue ram cichlids can breed as often as once every month. However, this is subjective. It depends on quite a few factors like their environment, diet, age, and health.

How Many Eggs Do German Blue Ram Cichlids Lay?

On average, German blue ram cichlids can lay up to 500 eggs during one breeding season. The female’s age, health, and size play a pivotal role in determining the size of the clutch.

Feeding the right diet, performing a big water change, and increasing the temperature by a few notches are the most effective ways of encouraging your German blue rams to breed.

The recommended pH range is 5.5-6.5. The temperature can be slightly increased to 82 degrees Fahrenheit ( 28 degrees Celsius).

If your cichlids are malnourished, the chances are they’ll yield an unhealthy clutch. In some cases, the eggs don’t hatch at all due to organ failure.

Feed the pair protein-rich food like mealworms, brine shrimp, and crickets to encourage spawning and ensure a healthy clutch.

To increase the chances of successful breeding, you should purchase a group of juvenile German blue ram cichlids. Since they mature sexually quite fast, they’ll quickly form pairs.

The male’s colors get intense, and his temperament gets violent when he’s ready to mate. He’ll try to woo the female by flaring his gills and throat, lashing his tails, and curling his body.

Once they find a suitable mate, these cichlids stick with them throughout their life. They also make pretty good parents.

After you notice the breeding pair has formed, you must transfer them to a separate breeding tank. Don’t go by the size – these cichlids can get a lot feisty when they prepare to mate.

They especially grow intolerant towards bottom dwellers as they hunt for a suitable place to lay eggs.

In the breeding tank, make sure you increase the temperatures slightly, feed protein-rich food, and perform water changes to encourage the fish to breed.

Once the breeding tubes in both parties become visible, you can assume that breeding is imminent.

The pair will look for a suitable mating spot. They will clean the flat rocks and driftwood. If these aren’t available, they’ll dig a pit in the substrate. You should provide numerous flat rocks to stimulate them to breed.

The female will swim in circles over the chosen breeding spot and frequently rub her underside on its surface. Then after a few tries, she will release the first batch of eggs.

The male will quickly follow the cue and release the milt over the eggs to fertilize them. This process can go on for a couple of hours, depending on the clutch’s size.

The incubation period for eggs lasts anywhere between 3-5 days. Generally, the higher the temperature, the sooner the eggs hatch. However, don’t increase the temperature unnaturally to speed up the process. It can very well backfire.

After 24 hours or so, the fertilized eggs will develop an orangish amber color. The ones that weren’t fertilized will become opaque white and most likely develop fungus.

The parents will dotingly fan the eggs, so they receive proper aeration and don’t succumb to fungus. They’ll also fiercely guard the eggs against possible and perceived threats.

Once the eggs hatch, they rely on the yolk sac for nutrition for a couple of days. The parents will move the wigglers from pit to pit – the ones they constructed beforehand.

The parental duty doesn’t stop here. The pair will frequently mouth and tumble the larvae to ensure healthy development.

After a week or so, the fry become free-swimming and are herded by the parents. At this point, you can feed them microworms, baby brine shrimp, and pulverized flake foods.

You must pay close attention to whether the fry are eating or not. If they starve, they will drop dead like flies.

At first glance, German blue ram cichlids look almost identical. However, if you observe them keenly, you can quickly tell them apart.

The main differentiating factor is the black botch that’s located right beneath the dorsal fins. In males, this spot has a stark black color. In females, it has hints of iridescent blue here and there. The angles and lighting can make it hard to examine them, but this is still the most reliable way there is.

Some other pointers include the difference in head and body shape, length and shape of fins, and coloration.

Also, some secondary similarities that you can only notice during the breeding season are the distinct pink bellies in females and the difference in the shape of the breeding tube.