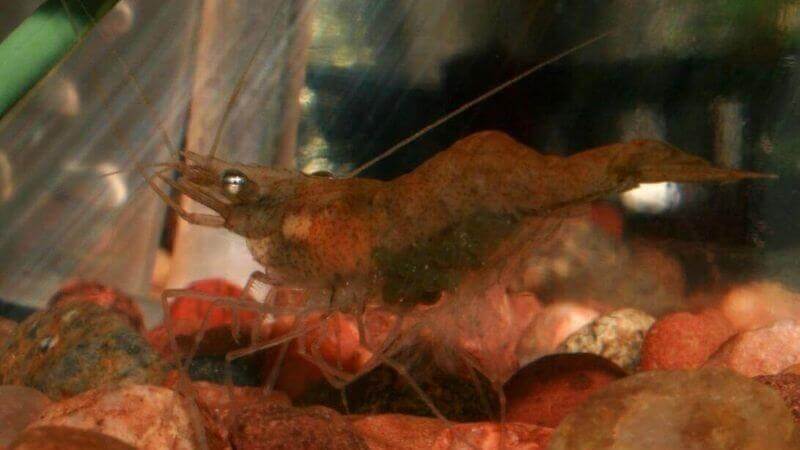 I have always been finicky about where I get my pet and pet supplies. So, over all these years of raising ghost shrimps, I’d never had to deal with parasitic infestations until last month.

I was dumbfounded when I saw wriggly, white, thread-like worms in some of my ghost shrimps’ heads. That’s when I frantically entered ‘ghost shrimp parasite’ into the google search box.

But unfortunately, I found no concrete answer to my woes. I posted on forums but was met with replies like, don’t waste time on a life worth 30 cents.

A pet is a pet regardless of the price, right? So disregarding a life based on cost doesn’t sit well with me.

So, in this blog, I have tried to accumulate and condense all the information on ghost shrimp parasites that I scrounged from journals and Reddit threads alike.

Ghost Shrimp Parasite- What Is It?

Horsehair worm is the most commonly found parasite in ghost shrimps. These parasites are white, thin and range anywhere between 1 mm to 1.5mm in width. Unfortunately, there’s no known cure for this. In most cases, the infested shrimp will turn opaque white and die within a couple of days.

There are a few methods you could try that I will write about below. Unfortunately, these methods didn’t work for me, but they did for quite a few aquarists.

All of my infested shrimps died. Reportedly, the worm will grow until it bursts out of the shrimp – killing the host effectively and violently in the process.

That wasn’t the case for my shrimps. Instead, they just turned milky white and died.

In other invertebrates, the worm usually expels through the anus, but ghost shrimp typically don’t live that long to put up a fight.

If your shrimp is lucky, the worm will exit through the rear end. But the chances are very slim.

Watch this video of a horsehair worm-infested ghost shrimp as her eggs hatch!

I’ll tell you more on this topic, prevention tips, and ‘cure.’ But first, let’s tackle some critical questions.

No, horsehair worms cannot infect fish since they cannot parasitize vertebrates. So, reptiles, humans, and our pets like cats and dogs are safe as well.

Even if your fish ate an infested ghost shrimp, he should be able to pass it without any complication.

If the horsehair worm in question is an adult, it’s very unlikely that it will infect another invertebrate. But if it is still in the larva stage, it can easily leech on fellow crustaceans.

So, although you don’t have to worry much about a tank-wide infestation, it’s best to immediately quarantine the infested ghost shrimp.

Since snails are invertebrates, they can also be the carriers (and sufferers) of horsehair worms. Sadly, in the majority of cases, it’s straight-up fatal.

However, it will be tremendously difficult to spot these parasites in a snail due to their opaque bodies. In most cases, the worms make a house in the eyestalk.

Now that the important questions are out of the way let’s look into the possible treatments.

Disclaimer: These methods aren’t 100% safe. It could be lethal if you conduct it wrongly or if the shrimp overdoses.

How To Treat Horsehair Worm In Ghost Shrimps?

There’s no absolute cure for horsehair worm in ghost shrimps, but there are a few tried and tested methods with some success rates. One uses the API General Cure Method as suggested, while the other uses melafix and pimafix together.

API General Cure is used for a wide range of parasitic woes in shrimp. So, it’s wise to give it a go. I read a few accounts where it successfully helped the ghost shrimps.

According to the instructions on the site, you have to use one packet for every 10 gallons. So, administer the amount depending on the tank’s size.

It’s also instructed to add 2 packets every 48 hours until the symptoms appear. Most likely, the goal, in this case, is to kill the horsehair worm and to hope it would safely pass while excreting.

Even if it doesn’t seem too likely, it’s still best to use this because it will eliminate potential parasitic outbreaks in the tank.

Don’t forget to use it in the main tank too! Why skate on the thin ice, right?

A user in the Fishlore forum claimed that he had success treating his ghost shrimps with this combination.

Melafix is an all-natural, anti-bacterial treatment used to treat wounds, ulcers, and open wounds in fish.

Pimafix is an all-natural, anti-fungal remedy made with West Indian Bay Tree. It’s popularly used to treat fungal and bacterial infections in both saltwater and freshwater fish.

Unfortunately, the shrimp owner didn’t mention the exact amounts of these medicines that went into the treatment. So, you’ll need to ballpark that based on your tank’s size.

He, however, said that after the treatment, the horsehair worms were missing. So it’s assumed that they were passed through the GI tract. Lucky!

Just knowing how to treat it isn’t enough. You must know why and how these parasites infest ghost shrimps in the first place, so they don’t take any more lives.

Let’s start with a brief introduction.

What Are Horsehair Worms?

Horsehair worms belong to the Nematomorpha species, which in Greek means thread-shaped. These parasites can either occur in knotted masses or as single worms.

There’s a common myth that these creatures literally develop in a horse’s hair. But that’s not true.

The color can range from white, brown, or even black. An adult horsehair shrimp can grow up to a foot in length.

When the larva grows old and big enough, it will leave the host’s body to go live in the water as a free body. These worms are very hardy. As adults, they can live without food for months.

Where Are Horsehair Worms Found?

Horsehair worms are primarily found in wet and damp areas like ponds, streams, pools, cisterns, and even puddles. Places like a pet shop that houses big water tanks and hundreds of animals are very much prone to house these parasites.

How To Identify Horsehair Worms In Ghost Shrimps?

In most cases, the horsehair worm is present as a white string, often knotted, that’s about 1 to 1.5mm wide and 2-3 inches long. They can also be brown or black. Since ghost shrimps are transparent, it’s super easy to notice anything opaque in their body.

Besides this, another vital sign is that your shrimp will gradually turn white. But, again, don’t confuse this with the molting process.

There are many ways a horsehair worm enters ghost shrimp or other hosts and completes its life cycle. The most common one is that the host directly ingots the larvae, which then immediately switches to its parasitic mode.

Another common method is that the preparastic larvae are consumed by water-living insects or tadpoles. At this point, the larvae encyst in the host’s body and remain there. And when your ghost shrimp consumes the tadpole or the insect, the larvae pass on to the ghost shrimp, where it emerges from the cyst to complete its life cycle.

And lastly, sometimes, pre-parasitic horsehair worm encysts itself on leaves and debris when the water source dries up. And if your ghost shrimp by chance consumed this vegetation, he would be infested.

Last but not least – let’s not forget the prevention tips.

How To Prevent Horsehair Worm Infestation In Ghost Shrimps?

Horsehair worm is almost always fatal, but there are measures you can take to prevent it. Foremost, buy the shrimp from a reliable seller where shrimps are bred in a hygienic environment. Second, goes without saying, but clean the tank regularly. And lastly, always keep a quarantine tank to control the outbreak.

Always Buy Your Shrimps From A Reliable Seller

Sadly, ghost shrimps are bred under poor conditions where sanitary measures are not taken seriously in most commercial scenes. So, always make sure you buy your shrimps from a reliable seller who doesn’t cut corners just because ghost shrimps are sold cheap.

Shrimps need a clean tank to molt safely. A clean tank also minimizes the occurrence of deadly parasites like horsehair worms. So, always make sure to conduct a 30% water change weekly to ensure the habitat is clean and free of nitrite, nitrate, and ammonia.

As soon as you find anything suspicious, make sure to quarantine the suspicious shrimp. A stitch in time saves nine.

It’s handy to always have an extra tank to be used as a quarantine tank or breeding tank if you’re raising ghost shrimps.

The most commonly found parasite in ghost shrimp is the horsehair worm, which unfortunately doesn’t have a sure shot treatment. This worm usually appears as a tiny strand of knotted white thread.

A user on Fishlore successfully treated his ghost shrimps with melafix and pimafix. So you could give it a shot. And to make sure the tank’s disease-free, you can take the help of the API General Cure Method.