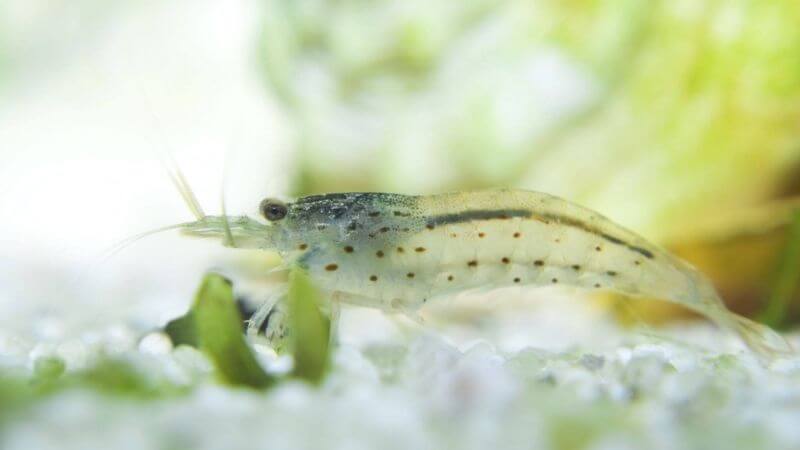 If there’s one thing Amano shrimp are famous for, that will be their relentless behavior of eating algae off plants. Overeating of algae turns some shrimp turn blue-tinted color when they are overeating hair algae. They feed to grow fast. Feeding rapidly is the reason they need to molt once a week. So this level of energy is not achievable when a creature is a lazy feeder. So, how active are Amano shrimp?

In this article, we will discuss how active are Amano shrimp. We will also shed some insights on why Amano shrimp can sometimes be hyperactive and sometimes too inactive. Let’s dive in further.

How Active Are Amano Shrimp?

Amano shrimp is one of the most active shrimp in all of its genus. They can feed 24/7 and remain active until your tank is spotless and free from algae. With feeding, few shrimp do come near their energy level. The fact that they aren’t nocturnal is why they feed during the daytime, too.

If you don’t see your Amanos in the tank, it must be somewhere hiding and feeding on your fishes’ remains and leftover foods. This usually happens during the daytime. When your fishes are sleeping, they will come out and feed on the algae that are present on the plants. This feeding activity reflects on how active the Amano shrimps can be.

Why Are My Amano Shrimps Too Much Active?

Being active is the nature of Amano shrimp. However, they can sometimes be too hyperactive not to spend their time feeding, but swimming frantically. Unhealthy habitat, stress, overpopulation, and mating time could be the reason behind an Amano shrimp being hyperactive.

Below, I have explained in detail.

Amano shrimps find it hard to survive in a habitat with a high level of ammonia, nitrate, and nitrite. This could be the reason your Amanos are swimming frantically and being hyperactive. Use a testing kit and measure the levels of chemicals present in your aquarium. Often the tap water we use for an aquarium has high amounts of chlorine, and this too could irritate your shrimps and cause them to be hyperactive.

Although Amano shrimp aren’t able to breed in captivity (Only hardcore aquarists who can perform the meticulous breeding process of breeding Amanos could do it), they can mate in the wild. The evolutionary need for progeny alerts them that the mating season is on, so you will see your Amano being hyperactive. You can do nothing about it except manage the level of proportion between male and female Amano.

Stressed Due To Bad Mates

Amanos are gentle creatures who are easily afraid whenever there’re big inhabitants in the tank. Big fishes often scare them, and this will cause stress among the Amano shrimps. When scared, they will use their tail and powerful hind legs to coil up and show rapid movement in the tank. This distress often results in them being hyper aware of other inhabitants living in the tank.

Small Tanks Also Cause Them To Be Hyperactive.

You need to know the ratio between the gallon of water and no. of Amano shrimps that you can keep. The preferred ratio can be one shrimp per 3 gallons of water. If you have a 10-gallon tank, you need to keep only 3 Amano shrimps in that tank. However, aquarists often overestimate and keeps a troupe of Amanos in a smaller tank with the rest of the fishes in the same tank. Overpopulation means less space for every aquatics. This will cause the Amanos to encounter other species and cause them to be hyperactive, as they will become highly alert in this situation.

Presence Of Copper In The Water

Copper is the element that has a toxic element against most Mollusca and Arthropods. Coppers are found in the blood of shrimps. They are present in a minuscule amount in their diets too. However, if the water present in the tank is concentrated with copper, they have to breathe copper. This results in many fatal consequences. Your shrimps will get agitated and show hyperactivity when there’s a presence of copper in the water.

Why Aren’t My Amano Shrimp Not Active?

No matter how active they are, Amano shrimps can sometimes be inactive because of several reasons. Maybe they are ill, or it could be the stress causing them to stay idle. We will discuss these elements that could cause your Amano shrimp inactiveness.

The unhealthy water cause illness to your shrimps. Ill Amano shrimps won’t come out and stay idle when they lose their appetite. Amano shrimp can get vorticella, which is one of the common diseases caused due to unhealthy water conditions in the tank. Other bacterial infections are also caused because of poor water parameters. When struck with these illnesses, your Amano shrimps won’t show any movements and will remain inactive.

To prevent this, change your water often to cleanse the amount of nitrate, nitrite, and ammonia from your Amano’s habitat.

Stressed Because Of New Tank Mates, So They Are Hiding.

Amano shrimps can get stressed when they see other inhabitants bigger than them. So they go for hiding and won’t come out for feeding. And when you look at your tank, you won’t see your shrimp and think it is inactive.

So, what you can do is pair them with suitable tank mates like other shrimps, neon tetras, mystery snails, guppy, etc. This will boost their confidence in coming out to be active.

Eyes Could Be Lies

If your tank already has many decors, you won’t be able to see your Amano shrimp, and it will lead you to think that they are hiding and being inactive. However, that is not the case as they will constantly feed off plants.

Final Words On How Active Are Amano Shrimp

Amano shrimps are one of the most active shrimp out there. That is why the famous aquarist Takashi Amano saw them fit for clearing the algae in fish tanks. If you are wondering why your fish is more active than other shrimps, you don’t need to worry because it is normal for them to be active. However, if your Amano shrimp is inactive, you need to check the water parameter first and then look for other signs mentioned above.