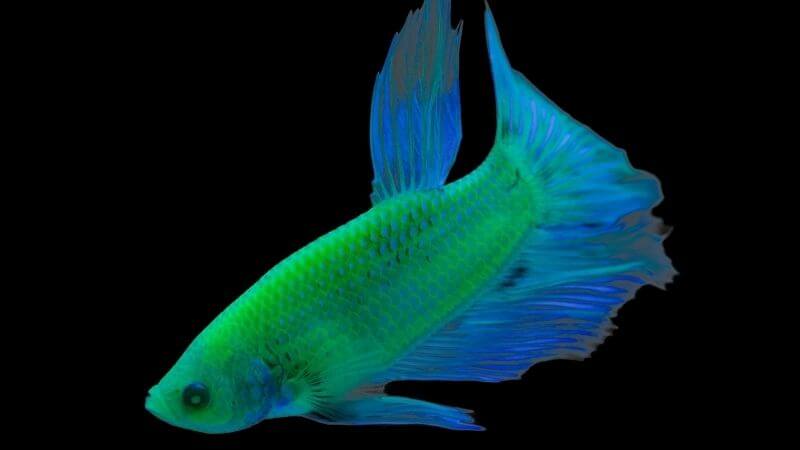 If flashy colors, iridescent scale, and flowy fins like ball gowns weren’t enough to love bettas, now they glow! Yes, you read that right. They now glow a beautiful shade of green and look nothing short of magical. The cult-favorite aquarium fish was finally brought into the GloFish family in 2020. But how are glofish bettas made?

Are those rumors about them being injected with dye true? Even worse, are they hand-painted? Is it even ethical to keep glofish bettas?

In this blog, we will discuss everything there’s to know about these whimsical fish – right from how they’re made to the controversies surrounding their very existence.

Let’s get right into it!

How Are Glofish Bettas Made?

Glofish bettas glow under the blue LED lights due to the presence of a specific protein called green fluorescent protein (GFP) that is originally found in jellyfish. GFP emits a bright green light when it comes into contact with the light of a specific wavelength. This protein was initially injected into the betta fish embryo.

Note that not every single glofish betta available is not injected with GFP. Instead, each new glofish betta inherits its unique color and trait directly from its parent.

So, glofish bettas that you see in pet shops everywhere are produced from the offspring of fluorescent bettas developed probably a couple of years ago.

The first glofish were created by Singaporean scientists by inserting fluorescent genes from sea anemones and jellyfish into the eggs of zebra danios for environmental purposes.

In circa 2005, Austin-based company Yorktown Technologies bought the patent and decided to breed and sell glofish. Today, there are more than 12 lines – species and color combinations of glofish.

Does Glowing Hurt/Harm The Bettas?

The green fluorescent protein (GFP) gene and its expression of light are harmless for bettas or any other glofish species. However, leaving the lights on too long to admire their illuminance can negatively impact their growth and health.

Are Glofish Bettas Dyed Or Injected?

Unlike jellyfish cichlids or painted glassfish, glofish bettas aren’t dyed or injected with colors. Their unique coloration and glowy trait are hereditary and passed down from generation to generation.

Glofish Betta Colors – What Colors Do They Come In?

As of now, glofish bettas come in just one color – Electric Green. Their current portfolio consists of the following:

But I’m pretty sure the company will introduce glofish bettas in their other iconic and probably patented colors like Galactic Purple, Cosmic Blue, Starfire Red, and Sunburst Orange.

Why Is My Electric Green Glofish Betta Turning Red?

Your electric green glofish betta is turning red because some of these fish have red pigmentation by birth. As they grow, their bodies and fins may develop a red tinge. This is quite rare – reportedly seen only in 2-4% of the glofish betta population.

Naturally, glofish bettas that haven’t inherited the red pigmentation will not turn red. And since the gradual color change is a natural metamorphosis, it doesn’t affect the fish’s health and longevity.

And since this red transformation is so rare, many fishkeepers find this trait unique and desirable!

What Do Glofish Eggs Look Like? Photos And Videos!

How Many Glofish In A 20-Gallon Tank? Honest Answers!

The genetic modification that makes glofish bettas glow doesn’t compromise their health in any way. Therefore, they are just as healthy as your regular betta.

And they’re prone to the typical betta ailments, just like standard bettas. For example, they can develop swim bladder disease, velvet, ich, and popeye if not cared for correctly.

Glofish Betta Lifespan – How Long Do They Live?

Glofish bettas have an average lifespan of 3-5 years. That’s on par with regular bettas. And as always, with proper tank setup, maintenance, and diet, you can extend the fish’s life by a couple of years.

Glofish Betta Food – What Can They Eat?

Bettas are carnivorous fish that mostly snack on insects and insect larvae in their natural habitat. So, in captivity, they will deter plant-based food. The ideal betta diet would include quality fish flakes or pellets, freeze-dried foods, and live foods like mosquito larvae, bloodworms, and brine shrimp.

While buying commercial pellets or flakes, look for protein-rich options with no fillers.

Just like their non-modified cousins, glofish bettas are prone to bloating and constipation. The most common reasons behind them are feeding low-quality food, overfeeding, and not soaking the pellets before feeding.

And while these health conditions may not sound like much of a big deal, they can potentially kill your fish if you don’t intervene timely.

To prevent bloating, always soak the pellets in dechlorinated water for at least 30 minutes before feeding. Otherwise, the food will expand in the gut and cause bloating.

Glofish bettas, in typical betta fashion, are as unsocial and territorial as they come. They’d rather have the entire tank to themselves. They don’t fancy socialization as some fish do.

Researchers from Belgium’s Ghent University have concluded that bettas become stressed from sharing a tank with any fish they see as rivals, especially when confined and can’t swim away.

That being said, companionship is essential for even the most unsocial and aloof fish. Therefore, you need to choose tankmates that won’t get involved in head-on battles with your betta or encroach its territory.

While researching for this article, I came across many strong opinions about glofish bettas and glofish in general. There’s even a petition with more than 1500 signs to stop the sale of glofish bettas!

Let’s briefly look at what people have to say about glofish bettas.

What Does The Public Think About Glofish Bettas?

Note: All the opinions expressed purely belong to the respective authors!

“I don’t like this idea – trying to get little kids to buy them. And you know what? They will! And they will keep these fish in tiny one-gallon tanks – most likely uncycled with no filter or heater.”

“Just saw glofish bettas at Petsmart. I had an immediate negative reaction. Oh god – this just seems wrong on so many levels.”

“I personally have a problem with glofish bettas because I think the glow factor markets them further towards young chicken and promotes bad care. We should be pushing pet stores to sell less bettas, not more.”

“I’m actually more concerned with the crappy glofish tanks they sell. What kind of 1-gallon micro-monstrosity are these poor guys gonna end up in?

“The only problem that I have with glofish bettas is the fact that it has a higher chance of getting neglected than the bettas already are! And I don’t like the neon color. I hate anything that’s bright neon.”

“My only concern: how do those bright blue lights not bother the fish? Glofish betta in the store were noticeably more skittish than the regular ones.”

However, not all opinions were negative. Some were, well, neutral – they didn’t have very strong opinions. So let’s see what they have to say.

“Glofish bettas aren’t really my taste, but I don’t oppose them either. Some non-GMO bettas become blind from diamond eyes, have difficulty swimming with heavy fins, and are susceptible to tumors. Well, that’s worse than glowing.”

“I don’t see them as inherently any less healthy than the average betta, as some have mentioned. But I do admit they already have some weird genetics.”

“I honestly don’t have a problem with glofish. Of course, they’re gimmicky and genetically modified, but at least they’re not injected with dye.”

“I’m kinda okay with them. If they have proper tank and care, I don’t see why they should be controversial.”

Well, that was a mixed bag, wasn’t it?

Whatever the public has to say, apparently, glofish account for 10% of all aquarium fish industry sales! And I’m sure the sales are gonna skyrocket with the new betta addition.

Final Words: How Are Glofish Bettas Made?

Glofish bettas are made by genetically modifying regular bettas. The first-ever glofish bettas were created by inserting green fluorescent protein from jellyfish into betta’s embryo. The glofish bettas we see and love today are their offspring who have inherited the glow from their parents.

Glofish bettas have stirred quite a controversy. Fishkeepers are worried that they’ll end up in the inexperienced hands of children and get mistreated. So, if you are planning to get one, make sure to read up on everything you need to know about the fish to give it the best life possible.

How Many Glofish Danios In A 10-Gallon Tank? 5 Or None?

How Many Glofish In A 3-Gallon Tank? Zero!