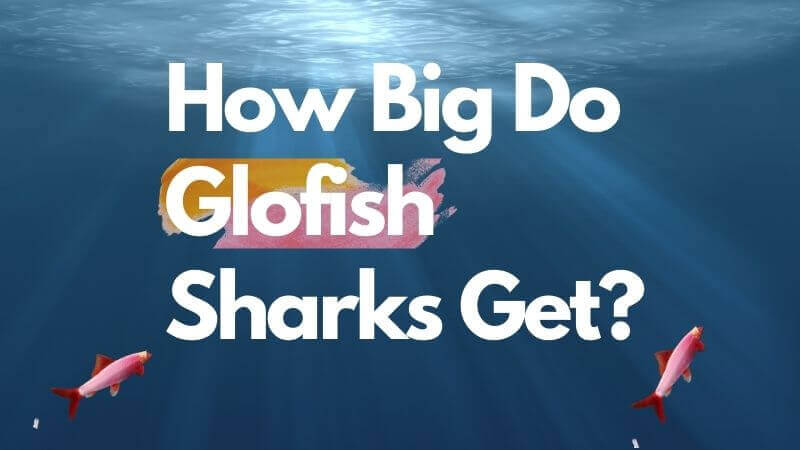 Glofish sharks are the largest in the genetically-modified, fluorescent fish family. And they need an enormous tank. They created quite a stir when first launched in 2018. Even more controversial was the tank size recommended by their creators. So, how big do glofish sharks get?

Do they have anything in common with the formidable sharks from Jaws?

You’d be surprised to know!

How Big Do Glofish Sharks Get?

Glofish sharks get around 4-6 inches (10-15 cm) long, just like their original species, rainbow sharks. These are long-bodied fish with flat bellies, pointed snouts, and erect dorsal fins that give them an almost intimidating shark-like appearance.

But guess what? Glofish sharks aren’t real sharks. Neither are rainbow sharks.

As a matter of fact, they come from the rather commonplace minnow family. They’re more related to loaches and carps than sharks!

Their ancestors originally came from Cambodia, Laos, and Thailand. But now, they’re primarily raised in fish farms and are found living in tanks across the globe.

But don’t be disappointed! Although they aren’t related to sharks, they do share their notorious temperament.

Glofish sharks are as feisty and ‘nasty’ as they come. More on that later!

How Fast Do Glofish Sharks Grow?

The average purchase size for glofish sharks is 1-2 inches (2.5-5 cm). Between 2-4 weeks of age, they will have grown somewhere in the ½ inch to one-inch range.

After that, it can take anywhere between several weeks to a few months for them to attain their full size.

Glofish sharks grow pretty fast during the first formative years. In fact, at their prime, they can grow up to an inch per month!

These fish are considered sexually mature when at least about 4 inches (10 cm) long. But many will continue to grow after that as well, plateauing around 6 inches (15 cm).

How Big Do Glofish Danios Get? Is Your Danio Stunted?

How Many Glofish Tetras In A 10-Gallon Tank? There’s Bad News!

How To Grow Glofish Sharks Fast?

I’ll be the first to admit this heading sounds a little clickbaity.

However, good old tried-and-tested ‘tricks’ like keeping the water clean, feeding a nutritious diet, providing a bigger space, and creating a stress-free environment will definitely grow them at the best rate and to the maximum size nature allows.

Here’s what ideal water parameters for glofish sharks look like:

The brains behind glofish strategically chose the hardiest species to create fluorescent fish.

So, glofish sharks are tougher than your average fish. But that shouldn’t be an excuse to keep them in sub-par environments.

Like any fish, they are susceptible to unnatural spikes in ammonia, nitrite, and nitrate levels. If consistently exposed to the wrong environment, your glofish sharks will eventually fall sick and die untimely.

Upkeeping water parameters is not a one-time gig. But, like exercise or parenting, you need to do it every day to maintain certain results.

For example, you should check the equipment and remove uneaten food daily. Tasks like performing water tests, siphoning substrate, and scraping glass should be done weekly.

And lastly, you should prune plants, deep-clean decors, and change the filter media once a month.

Glofish sharks are omnivores. And they’re not finicky at all. In the wild, their forebears mainly snacked on algae.

They’ll accept a wide range of food in the aquarium.

Glofish sharks will readily feed on algae present in your tank, but that wouldn’t be enough. You’ll need to provide algae in various forms like flakes, waters, and tablets.

And you should occasionally fortify their diet with brine shrimp, daphnia, bloodworms, small crustaceans, and insect larvae.

The rule of thumb in the hobby is to give two sizable meals every day.

But my vet friend Ravi suggested that you can give 3-4 small meals as opposed to 2 big meals. This apparently helps curb resource-related aggression.

For instance, a bigger space means plenty of opportunities to exercise. Glofish sharks are super energetic fish, to begin with. If they don’t get to stretch their muscles as much as they’d like to or need to, don’t be surprised if their growth is stunted.

Both these factors contribute to your glofish shark’s quality of living and level of happiness. Less stress means strengthened immunity.

Minimum recommended tank size for glofish sharks on their official website is 20 gallons. However, any experienced fishkeeper would call that bogus. You need to give these fish at least 50 gallons each to avoid a bloodbath.

I’m not even kidding.

The fish we’re talking about today are extraordinarily aggressive and active.

Glofish sharks aren’t family guys by any stretch. They just won’t tolerate having any other fish that remotely looks like them in the tank.

Therefore, the safest choice here would be to only add one glofish shark per tank.

But if you’re daring like that, you can house multiple of them in a tank sized 125 gallons or above. The bigger is always better.

And you need to add plenty of hiding places using plants and decorations. If things get too heated, you might want a tank divider.

In the wild, rainbow sharks are known to be peaceful towards each other. However, in captivity, they turn on each other quite violently. Glofish sharks fall in the second category.

They’re quite defamed for their bad manners. They will be actively involved in head-and-tail butting. Oh, and let’s not forget biting.

A large glofish shark will continuously chase smaller ones in a tank until they succumb to death. I’m not even kidding!

And due to this behavioral oddity, they’re not recommended for new hobbyists.

Do Glofish Sharks Eat Other Fish?

Good news – glofish sharks don’t really eat other fish in the tank. I scoured through a few forums and found that people have successfully kept glofish sharks with gouramis, tetras, and even guppies.

However, don’t forget rainbow sharks are highly territorial beings. If anyone encroaches on their territory, it wouldn’t be far-fetched for them to snack on little intruders.

Glofish Shark Species – Who Are They?

Glofish sharks are made by genetically modifying rainbow sharks.

The first glofish sharks were created by inserting fluorescent genes into the embryos of rainbow sharks.

And the glofish sharks we see today get their vibrant colors from their parents. They’re neither injected, painted, nor dyed.

Glofish Shark Breeding – Is It Even Possible?

So far, there’s no record of successful breeding of glofish or rainbow sharks in aquariums. They are extremely hard to breed. And breeders reportedly inject certain hormones to get them to spawn.

Nonetheless, they’re egg-scatterers like the rest of the glofish species.

Final Words: How Big Do Glofish Sharks Get?

Glofish sharks grow around 4-6 inches (10-15 cm) in captivity. And they are ready to reproduce by the time they’re 4 inches long.

And although they don’t grow colossal, they need a huge tank due to their heightened aggression and activity level. The absolute minimum tank size needed for a single glofish shark is 50 gallons.

How Many Glofish Danios In A 10-Gallon Tank? 5 Or None?