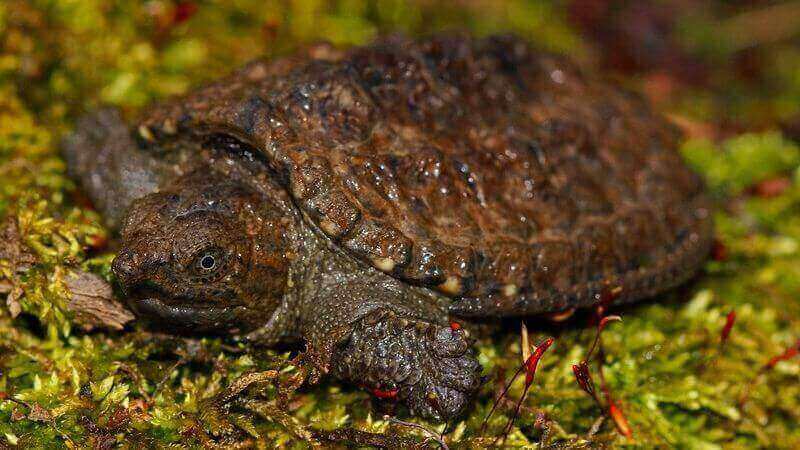 You might have found the local store selling snapping turtle hatchlings at just 10 bucks. So, you decide to buy and raise one. But have you considered how big these turtles will get in a year? What about their maximum size?

How Big Do Snapping Turtles Get?

Common snapping turtles grow to an average length of 9.8-18.5 inches and weigh about 22 pounds. Males are larger than females and weigh more.

An adult female will grow about 10 inches, whereas males have an average length of at least 15 inches. Also, the average weight of the male is over 22 pounds, and the female weighs about 13 pounds.

How Big Do Snapping Turtles Get In Captivity?

Hobbyists properly looked after them – so, they tend to outgrow the average size.

How Big Do Alligator Snapping Turtles Get?

The alligator snapping turtles are the largest freshwater turtles. The larger ones in the lot have shells extending over 2 feet in length. Also, they weigh about 250 pounds.

However, these figures are not standard. An average alligator snapping turtle reaches about 13 to 30 inches in length and weighs about 30 inches.

How Big Do Common Snapping Turtles Get?

Common snapping turtles at maximum have a shell length of 20 inches. However, most adults average around 9.8 to 18.5 in length. Females are relatively smaller and have carapace lengths between 8 to 14 inches.

How Big Do Florida Snapping Turtles Get?

How Big Do African Snapping Turtles Get in Captivity?

African snapping turtles in captivity aren’t known to grow larger than the average size. Captive turtles do not have the luxury of wide-reaching ponds of the wild. So, this also limits their growth rate—making them relatively smaller than turtles in the wild.

There have been talks of an African snapping turtle weighing about 403 pounds, found in Kansas in 1937. However, it wasn’t verified and still gets the benefit of the doubt.

How Big Do Northern Snapping Turtles Get In Captivity?

Diet is one crucial factor in a turtle’s growth. And these captive turtles get plenty of good diets. So, it is sure to see quicker growth in captive northern snapping turtles than the wild ones.
Read Next:

How Do Some Snapping Turtles Get So Big?

Some snapping turtles, especially the wild ones, tend to outgrow other turtles of the same family. Factors like larger habitat and diverse diet are some reasons for the enormous growth. But on average, captive turtles grow faster than their wild counterparts as they constantly get a high-quality food supply.

Here, I have explained in detail.

They can live in all manners of the ecosystem, be it lakes, swamps, marshes, rivers, etc. So, these turtles have an ample amount of habitation to forage from. This could be a prime factor for their anomaly growth.

They are at the top of the food chain in the swamp ecosystem. This means that they do not have to fear predators in their habitat, thus elongating their lifespan.

Snapping turtles, on average, will live between 40 to 80 years. But turtles above 100 years of age are also common in these species.

They are omnivores and enjoy a wide range of diets, including all sorts of invertebrates and aquatic vegetation. There are clips of ducks and cranes being devoured by these monstrous turtles. Even more, they are known to prey on other turtle species. This lets them gain the nutrients and minerals to grow at an astounding rate.

Common snapping turtles grow faster than other turtles. So, what you thought to be adequate to house them initially will not be big enough after a couple of years. A juvenile snapping turtle will require at least a 55-gallon tank. For adults, you need to keep them in a stock pond of 300 gallons or more.

Make sure the stock pond has more horizontal length than depth.

How To Create An Ideal Snapping Turtle Habitat?

There are few things that you should consider while making an ideal snapping turtle habitat. For example, it’s better to keep them in a stock tank than an aquarium. Also, they don’t like deep waters but prefer some hideouts in the tank.

Here are some tips on how you can keep snapping turtles in a habitat that’s worthy of them:

Keep Them In A Stock Tank Rather Than Aquariums

I have already emphasized how fast these turtles can grow. A baby snapping turtle will grow about 6 to 7 inches within 2 years. Aquariums will soon be insufficient as they reach juvenile stages.

So, get a stock tank that can be repurposed as a new habitat for your turtles. What’s great about these stock tanks is that you can cut and remodel them to install drains, filters, heaters, hoses, etc. There will be plenty of room for a basking area too.

Snapping turtles aren’t diverse and will want pretty shallow water. Your tank can be 1 and a half feet deep. Focus more on horizontal space than depth.

Keep Driftwoods And Rocks In The Tank

Snapping turtles like to hide under things. It is in their predatory instinct to camouflage and ambush their prey. So, adding plants, driftwoods and rocks would help closely mimic their natural habitat.

Final Words: How Big Do Snapping Turtles Get?

Snapping turtles, especially the common snapping turtles, are known to outgrow home aquariums within a year or two. Yes, they are relatively cheaper and cost only a few bucks. But the additional cost and the level of commitment you need to input as they grow older will gradually become a headache.

The rapid growth of these turtles is why turtle owners need to dedicate a healthy amount of time to maintaining their habitat and keeping their turtles happy.

So, if you are a light hobbyist who just wants to keep some turtles, snapping turtles shouldn’t be the first choice for you.