How Big Do Tiger Barbs Get? Grow Them Fast At Home! 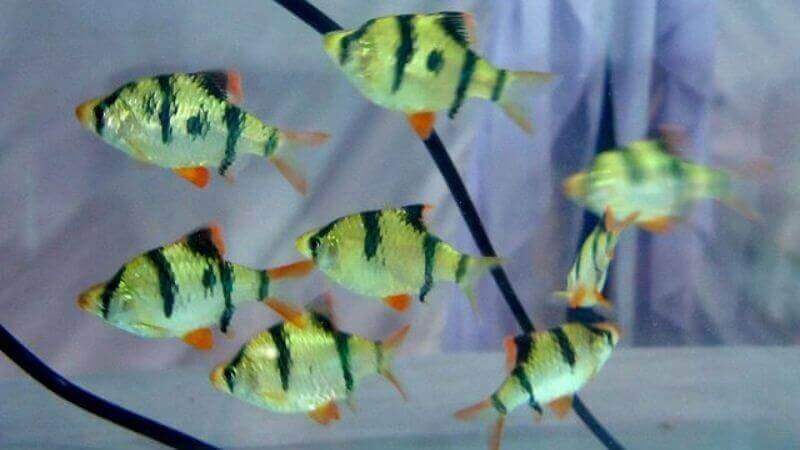 Tiger barbs don’t grow very big. But mind you, they have a BIG personality. I wonder what havoc they’d wreak in the aquarium if they were any bigger than they already are! So, how big do tiger barbs get?

Is there a way to grow them big and fast quick? And if there is, what are the drawbacks?

I’ll be answering these questions and some more in this article.

How Big Do Tiger Barbs Grow?

How Big Do Green Tiger Barbs Get?

Green tiger barbs are also often called moss green tiger barbs. However, these fish can vary considerably in how green they look. Some even look almost black!

How Fast Do Tiger Barbs Grow?

Tiger barbs don’t grow rapidly like their cousins, tinfoil barbs. You can expect to see the growth in the quarter to half-inch range every six months or so. And they will reach their full-size potential within 6-12 months.

I know, 6-12 is just a vast range for an answer. A hobbyist on a forum even claimed that his barbs reached their maximum size within 4 months.

You see, there’s no rule etched in stone for a tiger barb’s growth rate.

It depends on one too many factors like the diet you give, the environment you create, and how happy and content they’re.

And now that takes us to our next segment, where we will discuss ways to promote a tiger barb’s growth and their potential drawbacks.

Mold In Fish Tank? 10-Step Plan To Remove It.

How To Grow Tiger Barbs Fast At Home?

My apologies if the title sounded a bit clickbaity, but there’s no magic trick or a secret formula to grow fish faster. Instead, all the things required to keep a fish healthy – regular water changes, a well-rounded diet, and an appropriate environment – directly or indirectly help encourage your fish to grow at the best rate nature allows.

I’ll discuss these pointers below in detail, but here’s what you should know first. Tiger barbs aren’t the fastest-growing fish out there.

From what I have read, smaller fish take their sweet time to grow and mature – and tiger barbs are no exceptions.

Now, let’s dive into the details!

Findings have shown that fish release certain pheromones into the water that discourages the growth of the other fish. This probably has something to do with evolution – ensuring that it is the biggest fish in the pond.

And in the fish world, being plus-size comes with a host of benefits. The fish will be on the top of the pecking order, appear more attractive to potential mates, and are less likely to be challenged by other fish.

In nature, this trick doesn’t work too well. The pheromones will be quickly washed away and diluted in a jiffy. But that’s not the case in a closed system like an aquarium.

The pheromones have nowhere to escape – thus, they will get absorbed into the other fish’s body – potentially stunning their growth.

Both overfeeding and underfeeding are equally detrimental to your fish’s health. While the former leads to obesity and constipation, the latter is responsible for stunted growth and compromised immunity.

Tiger barbs are omnivores. Therefore, there’s a wide range of food you can give them. Zero in on quality flake food or pellets for staple food.

You can then reinforce their diet occasionally with blanched veggies like zucchini and broccoli and frozen items like brine shrimp and bloodworms.

House Them In A Big Tank

There’s a general notion that fish grow to the size of their tank. While there’s no scientific backing yet to support this claim, a small tank can most certainly stunt your fish’s growth in multiple ways.

Your barbs won’t have enough space to fully stretch their muscles and fulfill their daily exercise requirements in a cramped tank. Put simply, they won’t get to swim as much as they want.

And naturally, lack of exercise leads to stunted growth.

Second, a small tank is more prone to sudden changes in parameters and pollution. Spike in levels of harmful compounds like ammonia and nitrite happen a lot quicker than it’d in a big tank.

A polluted tank will not just stress your fish but also make it susceptible to different pathogens ubiquitous in your tank. And as you can guess, it’s hard for an unhealthy fish to reach its true size potential.

Lastly, lack of space means high levels of territorial aggression among the residents. Of course, all fish are territorial – some more than others. And in small tanks, there’s a good chance there’ll be brawls and duels over who gets the lion’s share. This will obviously stress your fish.

The tankmates and decorations you choose for your tiger barbs also play a pivotal role in determining how stressed the fish will be.

If there are bullies like oscars and jack dempseys present in the tank, your tiger barbs will be living in a constant state of fear and anxiety.

Likewise, if there are no hiding spots in the tank, your barbs will have nowhere to retreat to and recharge their batteries when they feel drained.

And studies have shown that when stressed, a fish’s ability to produce white blood cells is compromised. Consequently, this will lower the fish’s immunity and expose it to different health conditions.

So obviously, an unhealthy fish won’t grow well. So now you know why it’s crucial to create a stress-free environment.

Are There Any Downsides To Speeding Up Your Tiger Barb’s Growth?

While researching on the topic, I came across several clickbaity articles and YouTube videos claiming to grow your fish in a matter of a few days. Apparently, the tricks you can pull range from unnaturally increasing the temperature to feeding ‘special’ diets.

But these are all gimmicks, to say the least.

In fact, several studies point that unnaturally speeding up a fish’s growth can lead to negative consequences such as:

Lastly, if you’re really into owning some big fish and patience isn’t your best virtue, there’s always the option to buy an adult fish instead of a juvenile!

How Many Tiger Barbs Should Be Kept Together?

Although tiger barbs have an assertive personality, they still need to live and move in groups. They are schooling fish. Therefore, you should at least keep 6 of them together.

Any number lower than 6 will profusely stress your barbs. When kept in big groups, they usually keep to themselves – they fight and makeup.

However, if kept in smaller groups, they feel weak and vulnerable. As a result, they will resort to nipping the fins of other tankmates.

And that’s the reason why you should never pair them with long-finned fish like bettas, angelfish, and fancy goldfish.

Why Do Tiger Barbs School?

For tiger barbs, schooling is not a learned behavior. It’s their innate nature. Over thousands of years, they have evolved to school for the following reasons:

Reportedly, only 25% of the world’s fish species school throughout their lives – and tiger barbs are one such species.

If you keep at least 6 of them (preferably more) in a sizable tank, you can observe this fascinating behavior. Lucky you!

20 gallons is the minimum recommended tank size for tiger barbs. However, I would suggest that you at least keep them in a 30-gallon tank. The fish we’re talking about today are incredibly active and playful.

On top of that, you need to keep at least 6 of them together.

And a 20-gallon tank simply doesn’t have enough space for 6 mischievous and energetic fish to play around and explore.

That’s why you should at least aim to keep them in a 30-gallon tank. That being said, bigger is always better.

Also, while at it, opt for a long tank. It will accommodate their endless swimming laps.

Now, before we end this article, let’s answer some of the most frequently asked questions about tiger barbs.

How Long Do Tiger Barbs Live?

Under proper care, tiger barbs can live for around 5-7 years.

Just like their size, their age is also subject to numerous factors like the kind of diet they’re being fed, the environment they’re being kept in, their genetics, and how happy and content they are.

Tiger barbs are semi-aggressive fish. They’re not downright mean and angry little fish, but they’re no saints either. Tiger barbs tend to nip fins off the tank’s other residents when stressed or angered.

Tiger barbs can be bullies sometimes – pushing, chasing, and nipping.

However, at the core, they’re active and social fish that just want to have some fun!

And you will most definitely need to install a reliable and safe heater to maintain the right temperature at all times.

Tiger Barb Food – What Do They Eat?

Tiger barbs are omnivores and not fussy about what they put in their mouths. They should be given a well-rounded variety of food to strengthen their immunity and enhance their colors. You can provide quality flake food or pellets as a staple diet.

Then, you can fortify their diet a couple of times a week with frozen items like brine shrimp, beef heart, and bloodworm. They can also snack on small aquatic crustaceans.

And lastly, you can also give them blanched veggies like zucchini, romaine lettuce, broccoli, and spinach.

Give two meals a day – amounts they can finish within 2-3 minutes.

Final Words: How Big Do Tiger Barbs Get?

Tiger barbs are petite fish. They have rounded, deep bodies with a high back and a pointed head.

And these fish don’t grow super fast as well. They take around 6-12 months to grow to their full size.

While there’s no hard and fast rule to grow your tiger barbs fast, getting a couple of basic things right like performing regular water changes, feeding a balanced diet, and creating a stress-free environment go a long way in ensuring your barbs grow to the best size possible.

What Do Fish Eggs Look Like In A Tank? Adorable Pictures!

Can You Use Spring Water In A Fish Tank? 6 Reasons You Can’t!

Can You Put Bottled Water In A Fish Tank? 5 Reasons You Shouldn’t!