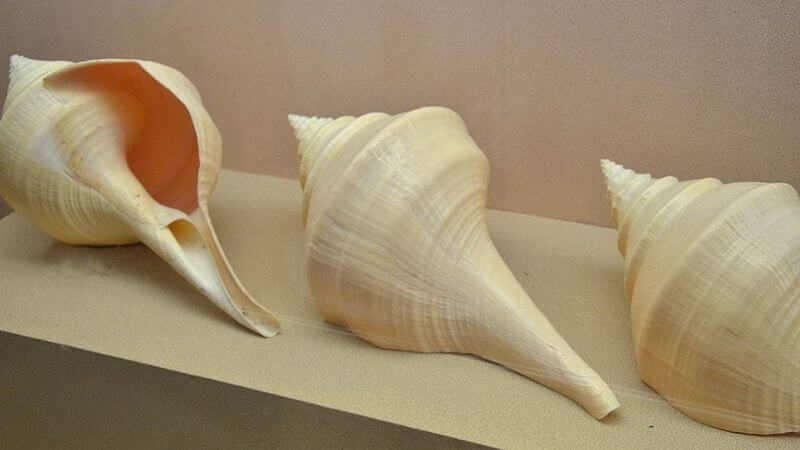 Did you know that the snails we keep in our aquariums are some of the smallest snail species? It is because we don’t have the luxury of keeping the big boys. So, are you curious how big they can be?

How Big Is The Biggest Snail?

The Australian trumpet snail is the largest of all snails. Native to Australia, they can grow up to a whopping length of 3 feet and weigh 30 pounds. No other snail species come even close to this snail.

The Australian trumpet snail has a pale apricot-colored shell covered by thick brown periostracum. However, as they age, it fades into a creamy yellow. The exterior is spindle-like, with a sturdy keel to support the whorls.

Due to its exquisite aesthetics, it is widely traded among shell collectors. The first mention of this snail is cited in the Hindu epic “Mahabharata,” where lord Krishna used it as a battle horn.

However, there’s a debate that the chank snail shell was used instead of the trumpet snail shell. And it could be true because the chank shell is one of the sacred totems in Hinduism.

Where Is Australian Trumpet Snail Found?

As the name clearly hints, the Australian trumpet snail can be found in the coastal areas of Northern Australia, Eastern Indonesia, and Papua New Guinea.

Although the battle for the largest snail has a clear winner, I have included some noteworthy contenders in this list of heavyweights.

Like George Foreman is to Muhammad Ali, the Florida horse conch is only second to the Australian trumpet snail. It can reach up to a massive length of 2 ft and weigh 11 lbs.

Clearly, this is one of the most giant predatory snails that feed on other gastropods. It is also the biggest snail found in US waters.

The habitat of this snail spans the coastal region of the Atlantic sea, North Carolina, and the Gulf of Mexico.

The Florida horse conch’s shell has a bright orange color which later fades and appears light tan or dark brown.

Named after the trident of Greek god Poseidon, the giant triton is one of the largest sea snails, growing up to 2 ft long. Although the average weight of this snail is considered only 5 lbs, the outliers weigh a lot more.

Giant triton feeds on the venomous crown-of-thorns starfish. It takes advantage of its wide mouth by consuming its prey whole. It doesn’t even bother paralyzing the prey.

Like the Australian trumpet snails, the giant triton is commercially harvested and sold as decoration or gifts to tourists.

Only second to Florida horse conch for the largest predatory snail title, the giant whelk can reach up to 10 inches long. It is found in the coastal areas of Australia and Tasmania.

Due to the similar appearance, it is often confused with mandarin pension (penion mandarinus). However, the latter is significantly smaller and has a smoother shell.

This is the largest land-dwelling gastropod in all of the snail species.

Although it is tiny compared to the marine snail species, the largest recorded specimen of the giant African land snail measured about 1 ft 3.5 inches from snout to tail when fully extended. And it weighed about 2 lbs.

Native to East Africa, it is an invasive species, tracing its roots back to Kenya and Tanzania. Their hardy nature has enabled them to invade every kind of geographical terrain. Be it agricultural land or concrete jungles, this slimy animal will thrive with ease.

The giant African land snail is a household name in the US now. It was first brought here in 1936. Back in the day, its invasive potential terrorized the whole US. Hence, in 2011, the Florida Department of Agriculture circulated the notice to eradicate these pests.

Since 2017, no sightings have been reported of these snails in Florida. However, it is still kept by a few snail hobbyists.

Their availability in a wide range of colors has made them a favorite among snail keepers and fish hobbyists. Some famous apple snails are giant ramshorn snails, mystery snails, and yellow snails.

Yes, these are the same snails that we keep in our aquariums. They can indeed get large, up to 5.9 inches long, making them the biggest freshwater snails.

So, if you plan to keep apple snails, I recommend you get a bigger tank because they will soon grow prolifically – both in number and size.

Which Snail Is The Largest Land Snail?

Final Words: How Big Is The Biggest Snail?

It can be hard to fathom for many that snails can be longer than 2ft. We are only used to keeping them as cleaning crew members, so most of us never imagine how giant some snails can be.

Most of the largest snail species belong to the seas and oceans. So, the terrestrial ones in your tank are definitely puny compared to the Australian trumpet snails.