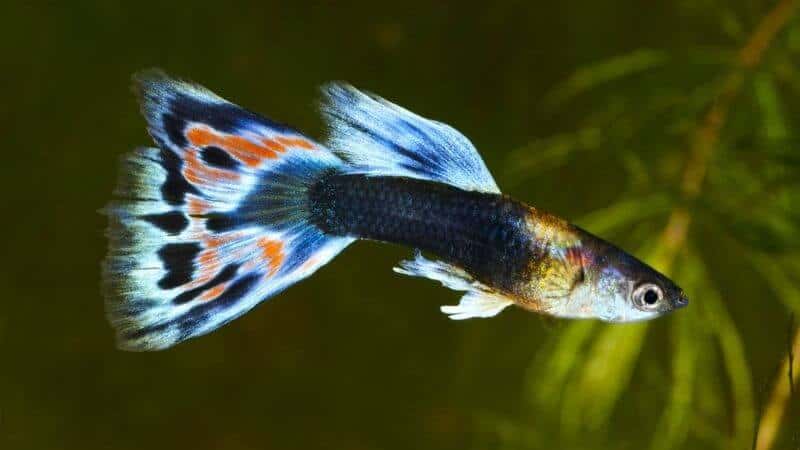 There are lots of exciting backstories behind guppy and its vibrant colors. The signature black, orange, and blue spots are the legacies of millions of years of survival and evolution. Predators are one among various factors that affect coloration in guppies. Let’s see exactly how do predators influence guppy coloration?

How Do Predators Influence Guppy Coloration?

Research has shown that guppies living in high predation areas have evolved to have smaller and duller spots to better camouflage against predators. On the other hand, guppies living in relatively safer areas inherit brighter, bigger, and colorful spots in shades of black, blue, and orange.

We can look at the example of guppies from Trinidadian water bodies.

There, male guppies are less colorful than males from other parts of the world. That’s because, in these natural habitats, guppies experience high predation intensity from diurnal fishes.

Thus, for guppies, good looks come at the cost of their very life.

A journal published in Oxford Academic showed that cichlids, one of the main guppy predators, almost always went after more vibrantly colored guppies. In their experiment, cichlids consistently and preferentially approached, captured, and attacked the brightly colored guppy when confronted with two similarly-sized specimens.

The results were the same for both stationery and free-swimming guppies.

Now that we have deciphered how do predators influence guppy coloration, let’s read how the love for life has taught guppies to adapt. As it turns out, color isn’t the only thing that’s altered.

How Do Predators Influence Mating Behavior In Guppies?

Under the heightened risk of predation, guppies are known to significantly alter their mating preference. For instance, male guppies switch from courtship and wooing to forced copulation. Since they don’t have to engage in courting activities, the risks of being identified and consumed by a predator quite dramatically decrease.

This serves as a significant benefit for the male guppies.

The case with females is quite identical too.

However, female guppies living in high-predation areas tend to be unreceptive to conspicuous males’ courtship.

This time, the table turns. Females will seek to go after inconspicuous, duller males because they are less likely to be found and eaten up by predators.

How Do Predators Influence Social Behavior In Guppies?

In animal kingdom, creatures always stick in bigger groups to guard against potential threats. This is why quite complex and hierarchical relationships exist among them. However, in guppies, shoals are relatively smaller when living in a high predation area. That’s because the chances of conflicts are heightened in big groups.

And quite smartly, guppies seldom venture out for food or exploration in high-predation areas. They always prefer to move in shoals or with preferred social partners.

How Do Predators Influence A Guppy’s Brain Size?

Male guppies exposed to predators, either in the wild or captive, develop heavier brains than those living in comparatively predator-free conditions. According to research by McGill University, male guppies living in high predation areas had a 17% heavier brain on average than males from safer regions in the same river.

Their brains have evolved in size to generate more energy required to live in a constantly exhausting environment.

It is possible because the brain is a highly malleable organ whose development can be drastically shaped by experiences lived.

However, this tendency isn’t evident in female guppies.

For me, this one is by far the most interesting marvel carried out by guppies in their quest for survival.

How Do Predators Influence A Guppy’s Reflexes?

Seemingly naive guppies can behave like matadors—focusing on the predator’s point of attack before dodging away at the last second. How they do it? Guppies can draw attention to their eyes by turning the irises completely black.

Thereon, the predator quickly attempts to charge at the guppy’s head instead of the body.

Guppies then use their lightning-fast reflexes to quickly whip their head out of the way and swim away—leaving the predator confused.

The fact that guppies have successfully colonized several prominent water bodies despite being at the bottom of the food chain is genuinely commendable. And even more admirable is how they do it.

Which Predator Influences A Guppy’s Characteristics The Most?

Guppies are known to display higher levels of predator inspection and shoaling behavior when they’re living among pike cichlids. They also foraged significantly less, spent more time on the surface, and moved in big shoals.

This result was derived from a scientific experiment, where guppies were placed among pike cichlids, acara cichlids, and wolffish.

Final Say On How Do Predators Influence Guppy Coloration

A predator’s influence on guppies is far-reaching and quite revolutionary. Guppies living in high-predation areas have evolved to develop duller and smaller spots compared to those living in a safe area. When moved from a safer place to a risky one or vice versa, a guppy can change the pigment and size of its spots over the course of just a few generations.

However, the influence isn’t just limited to color. Predators can impact a guppy’s life in many ways, such as social behavior, mating behavior, and even brain size. Thus, it’s safe to say that the fear of death can elicit behavioral responses strong enough to impact entire populations’ demography and life histories.