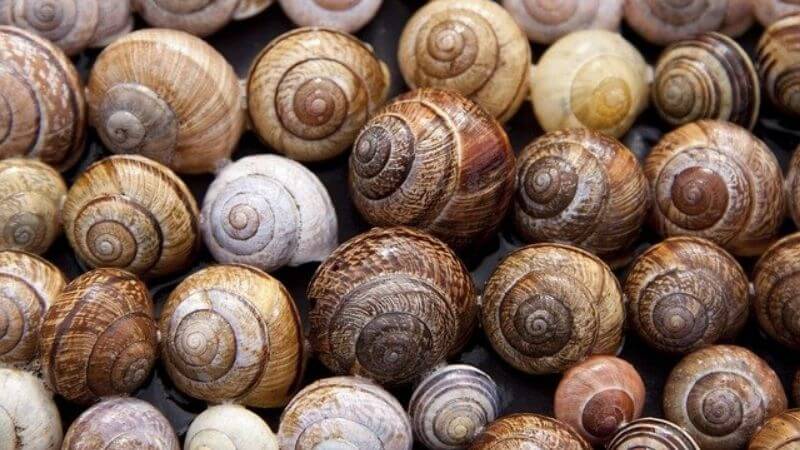 The Sisyphus of the mollusk category, a snail’s plight, is similar to a turtle’s. Although there are questions yet to be answered, like why snails evolved shells, we won’t be discussing that today.

Instead, we will discuss how snails developed their shells and what purposes these shells serve.

How Do Snail Shells Grow?

A snail’s shell is developed right from the gestation period. As a result, the newborns come out looking like miniature versions of adults. During their growth, they go through biomineralization, a process in which the specialized proteins in the body are in charge of forming calcium carbonate, morphology, and development, which makes up a solidified shell.

A snail attains its shell in the prenatal stage, which means they are born with it. But to develop it further, it needs to go through biomineralization.

Biomineralization, commonly known as calcification, will begin to form a lump on a snail’s body. At this early stage, the shell is also known as the protoconch.

The protoconch is translucent and has no distinct color of its own. Furthermore, the texture is exceptionally soft, making it fragile and vulnerable, even to the slightest haps.

Consuming loads of calcium will help toughen a snail’s shell. This is why the newborns will eat the eggshells they hatched from. This allows them to fulfill their calcium requirements for the time being.

But the calcium content from the shell will eventually deplete, and the baby snail will have to find a new source.

Subsequently, it will munch on its siblings’ eggshells that haven’t hatched yet – practicing cannibalism right off the bat.

Therefore, in most cases, compared to the late hatchers, the early kickers are the ones who develop into a fine young snails.

The shell grows as the snail grows. And with the help of the calcification process, the first shell, the protoconch, will expand.

The shell hardens and becomes firmer, and starts spiraling from the protoconch. Gradually, you will notice whorls or rings increasing in numbers.

Just as nature has been biased in making the majority of the earthlings right-handed, the same phenomenon is seen in snails, too. Most snail shells spiral in a clockwise direction.

However, some anomalies appear once in a while – there are snail shells that spiral anticlockwise.

Does The Shell Growth Ever Stop?

No, a snail’s shell never stops growing. It might seem like it plateaued after reaching maturity, but it will still grow slowly.

What Is A Snail’s Shell Made Of?

A snail’s shell is made up of organo-mineral biocomposites. The mineral part embodies about 90 to 95% of the shell weight, whereas the organic proportion is only 5%.

Although this 5% might sound minuscule compared to the organo-minerals, which comprise the rest of the whole, it still consists of hundreds of proteins, polysaccharides, and lipids.

As for the mineral composite, it is entirely made up of calcium carbonate.

So, how does a snail make calcium carbonate?

Calcium Formation In A Snail’s Shell

Several elements lend distinct characteristics to a snail’s shell. The first is calcium carbonate, and the second is the periostracum.

Snails need to intake calcium carbonate for overall shell growth. The land snail’s body absorbs calcium from the soil, and the water snails get it from the water they consume.

Snail shells are made up of both calcite and aragonite. Both are stable polymorphs of calcium carbonate. However, calcite is more stable than aragonite.

But without the 5% organic proportion, mainly protein, the snails are only left with minerals of no use. So the protein plays an essential role of an instigator that gives the compound characteristics such as strength, flexibility, and lightweight to a snail shell.

Snail shells are coated with organic lamination, periostracum, which at a glance, has a skin-like appearance.

The periostracum is composed of a protein known as conchiolin. The function of this protein is to cover all parts of the shell and seal the carbonate formed on the surface of a snail’s shell.

This will help accumulate ions underneath it, which is necessary to crystallize the calcium carbonate.

It is also responsible for the color formation of the shells. Sometimes, you notice these periostracum coming off when the snail is in poor health.

This is often witnessed in the shell of a dehydrated snail. The shell becomes dry and brittle, shortening the snail’s lifespan.

Now that you’ve known possibly everything you could learn about a snail’s shell, let’s move on to the benefits that come with it and also some cons which make it such a drag (pun intended).

I have listed two advantages and disadvantages of snails carrying their house on their back.

Let’s start with the advantages.

I am not talking about some fierce animals. In the wild, snails are picked by similarly-sized predators. They could be birds or insects. And when snails sense these killers nearby, their shell provides them with a safe haven to take shelter immediately.

Snails have to constantly hydrate themselves. They are gastropods which literally means stomach for legs. So, it is painful to imagine them rubbing their belly on hard surfaces while moving from one place to another.

But snails do it. And it is possible because they can secrete mucus which helps keep the road slimy and movable.

And to keep themselves hydrated, they need to be in a place where there is no direct exposure to heat. This is what their shells are for.

Now, we will move on to the disadvantages.

Too Much Loss Of Energy

Not only do snails have to carry their house perpetually, but they also have to invest a lot of their energy maintaining it. Shells demand a chunk of calcium to form.

So, even though snails get a house for free, they still have to earn one’s keep to pay that costly mortgage every time.

Prohibits Them From Venturing Into Tight Spaces

Slugs are snails’ closest relatives. But unlike snails, slugs do not have to carry the damn house on their back.

Their ability to creep into rocks and crevasses provides them lots of opportunities to find both food and seek protection from predators.

However, snails do not have this luxury. They are the beasts of burden in the mollusk family.

After reading this article, I am sure you got the idea of how snails depend on calcium to sustain everyday living.

Since prehistoric times, snail shells have been used as fake teeth, ornaments, and jewelry.

And it is incredible to know how they are now used as barometers for scientists to learn about our planet’s geology.