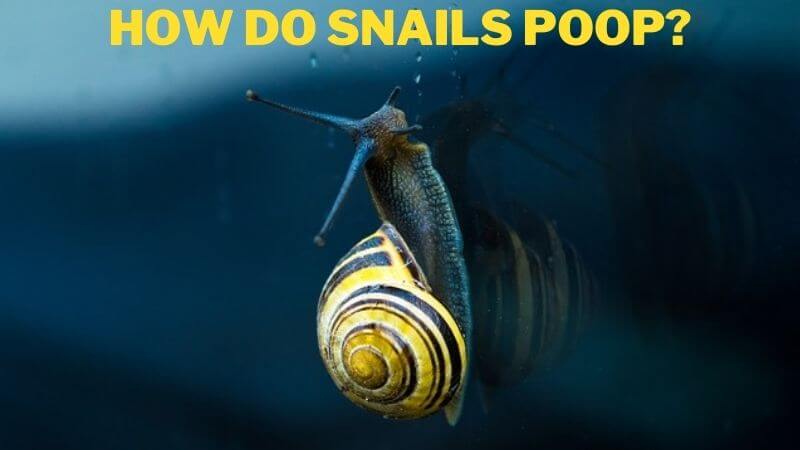 Snails are voracious eaters. They consume everything but the kitchen sink in the wild. Not to mention most snails are omnivores – thus, their diet includes everything from crops, herbs, and fruits to carrions and decomposed animals.

And judging by the amount of food that goes inside their system, they must poop quite a lot, don’t you think?

Forgive my inquisitiveness, but I am a Curious George keen on knowing how snails poop.

So, if you aren’t done with your food, put the dishes away because what we are about to discuss might kill your appetite.

How Do Snails Poop?

Snails poop from their anus, which lies close to the mantle cavity inside their shells. The waste passes through the small breathing hole present at the bottom of the shell. And they use this same hole for breathing when they are coiled inside.

Check out this apple snail pooping!

How Does Digestion Work In Snails?

Just like every organism, snails eat to survive. After the food is crushed by its radula, a flexible band of thousands of microscopic teeth, it passes down to the snail’s alimentary canal.

A snail’s alimentary tract consists of the buccal mass, esophagus, crop, stomach, intestine, and rectum, along with salivary and digestive glands.

Snails scrape the food with radula’s help, which turns the food into tiny bits. There are two large salivary glands on the sides of the crop.

These salivary glands help digest carbohydrates like starch and sugar. However, these enzymes aren’t adept enough to digest protein and celluloses.

With the first stage of digestion over, the food pulp is transported to the gullet.

At the rear end of the gullet lies a blind sac where the central digestion happens. Inside the sac, digestive glands make fluids, which digest carbohydrates, protein, and lipid.

Compared to us, the snail’s digestive system is remarkably effective in producing a range of enzymes that can digest materials that are indigestible for us.

Now the undigested foods pass through a digestive tract in the intestine. Finally, ciliated grooves on the tract’s surface reabsorb simple sugar molecules in the intestines.

Lastly, the feces reach the anus near the breathing hole in the apertural mantle fold. And when the snail crawls, they leave behind dark feces for you to collect.

Phew! Who would have thought snails could house so many organs and carry out such intricate bodily functions? Not me.

Why Does It Seem Like Snails Poop Through Their Mouth?

Since the snail’s shell lies closer to the breathing hole, it might appear as if it is pooping from its mouth. However, it isn’t true because snails only use the breathing hole below their shell to excrete feces.

A snail’s poop is thread-like and has a sticky texture. And when it dries, it appears darker and shriveled. The dry poop will curl at the ends, making a “C” shape.

The color of a snail’s poop depends on what food is consumed. For example, if the snail feeds on carrots or pumpkins, its poop color will be a shade of orange.

Land snails graze on the land where they get calcium, a nutrient indispensable for them. So, a snail feeding on cuttlebone will excrete black or gray poop.

Garden snails are the most common terrestrial snails we see in our surroundings. They feed on plants and, in return, excrete brown poop.

Although snail poop does not pose immediate harm to humans, freshwater snails are acute transmitters of schistosomiasis, a deadly parasite. However, this parasite is seldom found in garden snails.

There are different ways one can contract this parasite. To mention a few, it can transmit while wading, swimming, or dipping any part of the body in the water that has freshwater snails in it.

When searching for a host, these pathogens exit the snail’s shell and seek the human body. After penetrating through your skin, they migrate into blood vessels. Research reveals that they can survive there for decades.

Although the worm itself isn’t detrimental to your body, the eggs it lays pose life-threatening risks.

These eggs, after they mature, have the urge to come out of the human body and find snails to complete their reproduction cycle.

For that, they will use their sharp barbs to grind through the skin membrane to come out. As a result, the eggs can get lodged in tissues and cause anemia.

Research has shown that 10 percent of hosts with chronic cases die after contracting this condition.

Luckily, there are several ways to combat schistosomiasis. One of the most effective and affordable options is the drug praziquantel.

Despite medicinal wonders, experts still emphasize introducing snail predators to prevent schistosomiasis. It is indeed true that “prevention is better than cure.”

You can read more on: Why snails are one of the world’s deadliest creatures

Now, if somebody says that snails or their poop aren’t harmful to humans, you can confidently tell them that they are one of the most dangerous animals around.

They are only second to mosquitoes if you look at the number of casualties.

Is Snail Poop Good For Plants?

Yes, snail poop is good for plants. However, although beneficial, the effects are minimal because the quantity of poop will be nominal – obviously.

Hence, relying on snail poop as fertilizer isn’t the best of ideas.

Disclaimer: This isn’t a piece of advice from a botanist.

Do Snails Poop A Lot?

Snails are nocturnal feeders, and boy, do they eat a lot. They make one hell of an eater. So, it’s a no-brainer that their feeding habit directly corresponds with their pooping frequency. The more a snail eats, the more often it will poop.

As with your dogs or cats, there won’t be a designated place for your snails to poop. These rebels will poop anywhere they please. It can be on your window sills, plants, or even walls.

Garden snails are often found asleep on the leaves. Then, after eating their fill, they will poop on the same spot. Talk about manners!

As for aquarium snails, they will poop on the aquarium walls. You will be amazed at how adhesive their poop is.

Believe it or not, there aren’t any empirical findings on whether snails urinate. However, snails excrete runny poops, so many assume they urinate and poop simultaneously.

Final Words On How Do Snails Poop

Many have claimed that snails aren’t dangerous, but only a few know how dangerous their poop is. However, terrestrial snails aren’t the ones you should be afraid of. Don’t worry.

Freshwaters snails are the ones that carry the infamous parasites which cause schistosomiasis in humans. This is why you should be extra careful when handling a freshwater snail in your aquarium or in the wild.