How Do Turtles Breathe? Butt-Breathing To Living Without Oxygen! 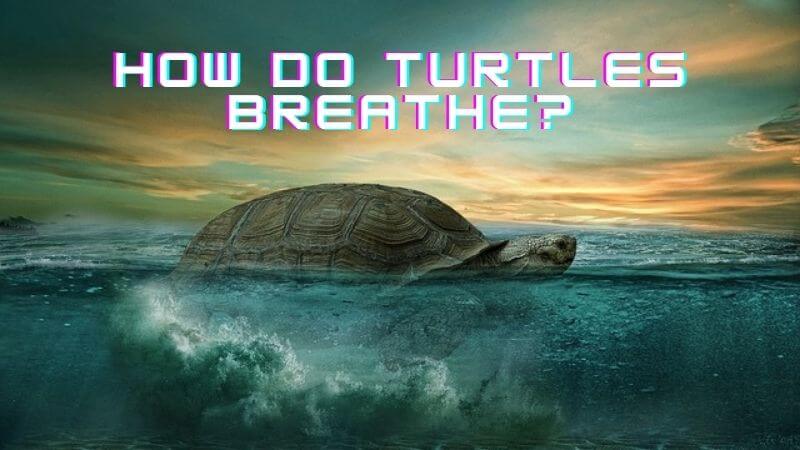 Turtles have been around for a really, really long time — over 250 million years! They’ve seen the rise and fall of many species, and in the process, adapted themselves to walk the earth and swim its oceans for millennia.

In this blog, we’ll talk about one such incredible adaptation pivotal to their existence.

How Do Turtles Breathe?

Turtles breathe in air through external nares positioned right above their mouths. The air intake passes through the glottis and into the trachea. Next, the trachea splits near into two bronchi near the heart, delivering air to the lungs. And once the lungs absorb air, it’s sent out to the entire body.

Like other reptiles, turtles have lungs. But since their shells don’t expand and contract as our ribs do, turtles rely on the expansion and contraction of muscles inside the shell to move the air in and out of the lungs.

Turtles also move their limbs alternatively, which helps the breathing process by switching the pressure between the lungs.

Now that the answer to ‘how do turtles breathe’ is clear, let’s see if the case is the same for their fully aquatic cousins.

How Do Sea Turtles Breathe?

All seven known species of sea turtles are air-breathing reptiles with lungs. Structurally, their lungs are slightly different from mammalian lungs but provide the same functions. When surfacing to breathe, sea turtles can quickly refill their lungs with one explosive exhalation and rapid inhalation.

Their lungs are located right under the carapace and the vertebral column.

Sea turtles spend the majority of their life underwater. They are known to cross entire ocean basins just to reach their favorite nesting spots. However, they must come to the surface time and again to inhale air through the nares.

Do Turtles Breathe Through Their Butts?

Yes, turtles breathe through their butts but only during hibernation. The technical term is cloacal respiration. A hibernating turtle gets its limited supply of oxygen through the butt, also known as the cloaca. It is an all-purpose orifice that can take oxygen directly from the water.

Technically, this process is less about breathing and more about diffusing oxygen in and carbon dioxide out. However, the truth remains the same. The butt is the chief source of oxygen during hibernation.

When the temperature drops and their favorite watering holes are frozen, turtles reduce their body temperature and metabolism by up to 95%. Although the oxygen needs are pretty low during hibernation, they’re still crucial to their wellbeing.

Thus, oxygen diffused from running water is enough for most turtles until next spring. And this is where cloaca comes into the play. Due to the high concentration of blood vessels, the cloaca will take up necessary oxygen directly from the water.

How Do Turtles Breathe Without Oxygen?

If turtles run out of oxygen during hibernation, they can switch to anaerobic respiration. This breathing process uses acceptors other than molecular oxygen. However, powering metabolism without oxygen comes with a time limit due to the secretion of respiratory by-product lactic acid.

So, this respiration process sends energy from glucose to cells quickly in the absence of oxygen. However, the production of lactic acid, instead of carbon dioxide and water, lead to painful muscle cramps.

How Long Can Turtles Hold Their Breath Underwater?

In normal circumstances, turtles can hold their breath underwater for anywhere between 45 minutes to an hour. Despite their remarkable adaptations, turtles can quickly drown and die underwater without oxygen.

Under stressful situations, turtles will use up the oxygen present in their body quickly. And once the oxygen depletes, they’ll resort to anaerobic respiration, which creates lactic acid buildup. And as a result, your turtle can die within a few minutes.

Unless the temperature is low enough for the turtle’s body to trigger hibernation, it constantly needs to swim up to the surface time and again to inhale oxygen from the air.

And although they can hold their breath for an hour or so, turtles usually come up for air for a few seconds after a 4-5 minutes long diving session.

Sea turtles have a drastically better threshold for holding breath underwater than their terrestrial and semi-aquatic cousins. For instance, Green Sea Turtles can hold their breath for as long as 5 hours.

However, Loggerhead Sea Turtles take the prize home for their astonishing record of remaining underwater for 10 hours!

Don’t try to test your pet turtle’s capability in this matter at home. Captive turtles aren’t raised to survive challenging situations like this and can get stressed easily. There’s a good chance they’ll suffocate and drown if you mishandle the experiment.

How Long Can Turtles Breathe Under Frozen Water?

You know the answer to how do turtles breathe during hibernation. Still, it’s equally important to know how long they can breathe. How long is too long?

Semi-aquatic species like Snapping Turtles and Painted Turtles can tolerate breathing through the butt and anaerobic respiration for around 100 days. In fact, painted turtles can handle anoxia better than most species. However, the time limit is considerably low for most terrestrial breeds.

It’s important to know that just because they can, turtles shouldn’t be exposed to this kind of adversity.

Mainly, frozen ponds pose two problems. First, turtles cannot come to the surface to take in the fresh air. Second, other critters living in the pond will quickly consume the remaining oxygen.

And in spring, when hibernating turtles emerge, they’re basically one big muscle cramp due to the lactic acid buildup during anaerobic metabolism. Only after basking in the sun for a reasonable amount of time, turtles can stir their metabolism, eliminate acidic by-products, and move around.

Conclusion On How Do Turtles Breathe

So, if you were thinking turtles breathe through their butt, here’s a short recap:

Like most reptiles, turtles breathe in air through external nares, which then pass through the glottis, trachea, and bronchi to reach the lungs.

Although turtles can remain underwater for 45-60 minutes, they usually come to the surface every 4-5 minutes to breathe in the fresh air.

The anatomy and processes are the same for sea turtles as well. Although, they have a higher endurance of staying underwater without oxygen.

As for breathing through butts, yes, turtles are very much capable of intaking oxygen through this unique process. This highly vascularized organ called cloaca, essentially the butt, can take oxygen directly from the water to meet the turtle’s low oxygen requirements during hibernation.

Turtles can also survive without oxygen with the help of anaerobic oxygen. They truly are nature’s marvels, aren’t they?