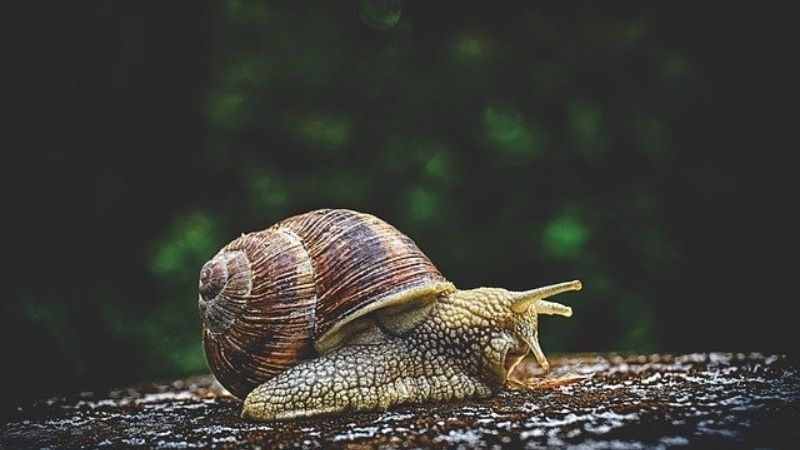 An experiment was conducted at the University of Exeter to study the snail’s movement to predict how they spread parasites that are fatal to dogs.

This study revealed that snails covered 3.28 feet in an hour. And they did it despite having to carry their home on their backs. A round of applause for the slimy pets.

So, how far can a snail travel in a day? Do they even bother going any far from their usual rendezvous?

The study from Exeter showed that terrestrial snails, on average, can travel about 3.28 feet in an hour. This means if they move non-stop for 24 hours (hypothetically, of course), they will cover 78.72 feet (0.014 miles) in a day.

It is implausible that snails travel ceaselessly for such a long period. Snails at max will only travel for about 10 to 12 hours in a day.

Although different snails have different speeds, we will take garden snails as an example for a general understanding of how fast snails move.

A garden snail will cover about 39.36 inches in an hour. This means they will only cover 0.65 inches per minute.

World Record For The Fastest Snail

Archie, a snail from central London, holds the record for fastest snail. It covered a course of 13 inches in 2 minutes and 20 seconds. And it was during an actual race held in O’Conor Don Pub. The event even had a racing commentator!

Snails travel faster at night and in the early mornings. This is because they do not like direct sunlight falling on their body. So, to prevent dehydration from the heat, they prefer traveling during those dim periods.

How Far Can A Snail Travel In One Hour?

A terrestrial snail can travel about 39.36 inches in an hour. When converted to feet, it is 3.28 feet per hour.

How Far Can A Snail Travel In 5 Minutes?

On average, garden snails can travel about 0.65 inches per minute. This means that a snail will cover approximately 3.25 inches in 5 minutes.

How Far Can A Snail Travel In 10 Minutes?

How Far Can A Snail Travel In 30 Minutes?

Although snails aren’t the fastest creatures we know, they can travel about 19.5 inches in 30 minutes.

Do Snails Travel For 24 Hours?

No, most snails are nocturnal and will only travel during nighttime. However peculiar it may sound, if it rains during the daytime, they will come out and continue their journey.

So, snails necessarily do not travel only during the night. Their travel has more to do with climate and temperature than time.

Do Snails Travel Faster At Night Than In Day?

Yes, snails, especially garden snails, show nocturnal behavior. They prefer foraging and traveling at night. But if it rains during the day, they will come out from hiding.

So, if the place where you live experiences long nights, about 10 hours (including semi-darkness), the snail will cover approximately 32.8 feet.

So, don’t be surprised if the garden snails you tossed out of the fence find their way back into the backyard in the morning.

So, How Do Snails Walk?

Snails have an organ known as the “foot,” which they use for sliding and crawling over the mucus they release from glands located all over their bodies. Slime protects snails so well that they can even easily crawl over sharp objects and jaggy surfaces.

As for the foot’s mechanism, it expands and contracts in a wave-like movement, helping them move forward.

Did you know that snails follow slime trails left by other snails to move faster? The slime discharged by the forerunners is often traced by the snails that are behind. This lets the snails conserve energy and make their travel efficient.

Snails invest more than 40% of their energy in producing slime. So, snails prefer the above-mentioned technique as a means of travel.

Yes, snails do migrate in the wild for a variety of reasons. These circumstances include foraging, predator avoidance, and larvae development.

For example, a nerite snail’s larvae require saline water to grow. Therefore, they migrate upstream to provide a suitable environment for their larvae to hatch.

How Far Will A Snail Travel In A Year?

Having said that, snails need time to forage, eat and rest. So, the numbers I mentioned above are purely hypothetical and are a far cry from reality.

How Long Will It Take For A Snail To Travel Around The World?

How Long Will It Take For A Snail To Travel Across America?

We will take the distance from Florida To Washington, 2802 miles. So, with its pace of 0.0006 miles an hour, the garden snail will take 533 days to travel across America.

How Long Will It Take For A Snail To Travel Every State Through Interstate Highway?

Final Words: How Far Can A Snail Travel In A Day?

This query is speculative because most snails spend their whole lives living in a small area, covering no more than 5 feet for entire months.

So, assuming a snail travels for a whole day is only wishful thinking. But nevertheless, the pace at which snails travel does make us wonder how long it will take to travel the earth.