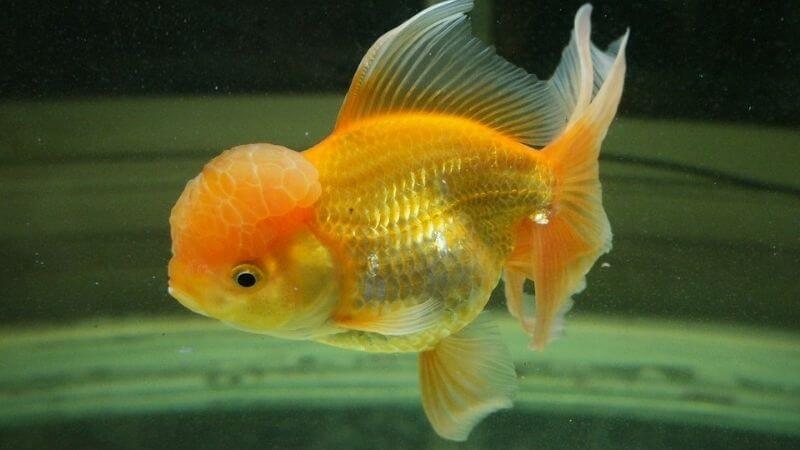 First things first. Goldfish are never pregnant. Yes, you read that right. The term ‘pregnant’ is only reserved for livebearers. Goldfish are egg-layers. So, the right question to ask here would be, “how long are goldfish gravid?”

Let’s get to the main query now!

How Long Are Goldfish Pregnant?

Goldfish are egg-layers, and thus they are gravid – not pregnant. And there’s no definitive gestation period. So instead, the fish will remain gravid and carry eggs in her body until they are ready to be fertilized by a male.

How Often Do Goldfish Lay Eggs?

Under favorable conditions, female goldfish can yield eggs as frequently as once a month. Temperature is known to manipulate the egg-laying frequency.

Therefore, you can expect your goldfish to be gravid much more often in warmer months.

How Many Eggs Do Goldfish Lay?

A female goldfish can lay over a thousand eggs during one spawning session. However, since not all eggs are fertilized, and parents eat their own eggs at every chance they get, not all eggs will yield fry.

So, despite the eggs being laid in thousands, the number of fry that will make it to adulthood is relatively low.

Goldfish eggs have a translucent white color and are sphere-shaped. They aren’t any bigger than 1 mm. In a tank, they look like tiny beads scattered all over the floor.

When first laid, all goldfish eggs have a washed-out white color and a translucent appearance. Once fertilized, the eggs develop a yellowish color. Towards the end of the hatching process, you can even see tiny black dots for the eyes.

However, those eggs that weren’t fortunate enough to be fertilized will retain their original form or turn stark white. They will either be consumed by their own parents or succumb to fungi and decompose.

How Long Do Goldfish Eggs Take To Hatch?

Goldfish eggs take anywhere between 3-5 days to hatch. The eggs should be adequately aerated with the help of a bubbler, spray bar, or air stone. I prefer air stones.

The eggs hatch faster when the temperature is warmer.

But note that it’s not recommended to increase the temperature drastically or suddenly to accelerate the hatching process. This will only backfire.

Do Goldfish Eat Their Eggs?

Unfortunately, yes. Goldfish make horrible parents. Both males and females in goldfish don’t have the slightest parental instinct. They will proceed to eat the eggs as soon as they’re laid.

Therefore, if you are serious about raising your goldfish fry, you should immediately remove the parents once the eggs are laid and fertilized.

Male VS Female Goldfish: How To Tell Them Apart

It’s not quite easy to tell male and female goldfish apart owing to the very subtle sexual dimorphism they display. However, the shape of their body, fins, and vents, as well as the iconic breeding stars, can help you distinguish the two sexes.

Their Bodies Are Shaped Differently

When you observe from above, female goldfish appear to be shorter and rounder in the abdominal area. However, when they become gravid, they will appear plump as they house 1000s of eggs inside their body.

That being said, the swollen appearance is sometimes due to a bacterial infection.

Typically, males are bigger and have a more prominent shape than females. They’re also thinner and longer in the abdomen region.

Their Vents Are Shaped Differently

The vent will become prominent and more noticeable towards the onset of the spawning season. It’s whitish in color.

In comparison to females, males have a longer and indented vent.

Breeding stars are also referred to as breeding tubercles. These are tiny white specks that look like grains of salt. So, if you see these little ‘stars’ dotted across the body, you most likely have a male goldfish.

These marks primarily appear on the front and pectoral fins and scales.

However, I should remind you that these marks aren’t always present in males. And sometimes, females sport them as well!

Fins Have Different Shapes And Length

A male goldfish’s fins will be longer and thinner. On the other hand, a female goldfish sports shorter and thicker fins.

Observe The Breeding Signs And Behavior

This is the most obvious sign of telling males and females apart. You’ll often find the males chasing the gravid fish around during the spawning season.

She will also occasionally be pushed and nudged.

As a result, you’ll find the female running away or hiding. Sometimes, she will even sustain injuries on the fins from constant bullying.

Goldfish Pregnant Signs – How Do You Know?

Once again, goldfish don’t get pregnant. They become gravid. I’m sorry about the heading! I gotta include what people search for – I hope you don’t mind. 🙂

So, besides the obvious weight gain, some other noticeable signs of pregnancy in glofish are eggs coming out of her vent when she’s being picked up, the mating ritual or chasing, and the appearance of breeding tubercles in males.

Now, let’s look at these signs in detail below.

In my opinion, the best way to observe if a goldfish is pregnant is to take a closer look at her body. As I said above, when you’re housing over a thousand eggs in your system, you’re bound to look like you’ve put on some weight, right?

So, your female goldfish will look chunky – especially around the abdominal area. Of course, she won’t always necessarily look super overweight, but you can easily notice the chunkiness.

The Eggs Will Fall Off When You Handle Her

When you handle a female goldfish that’s all set to release her eggs, a few eggs will fall off her body.

Since they can produce so many eggs during one spawning season, it’s natural for some eggs to fall off prematurely when touching or transferring the fish.

That being said, don’t handle the fish until you absolutely have to. This will only profusely stress her out.

She Will Get Bullied

A gravid female will be bullied – often relentlessly – by her male counterparts as they compete to fertilize her eggs. So if you see a female being constantly chased by males, it’s a telltale sign that she will lay some eggs soon.

As primitive as we think goldfish are, they’re very serious about extending their lineage. Thus, they will compete for the female’s often in not-so-chivalrous ways.

That being said, males are not always harsh on females. Sometimes, they perform an intricate mating ritual too!

The Males Will Develop Breeding Stars

With the onset of the breeding season, the males will develop tiny white dots across their bodies – referred to as breeding stars. As I explained above, these are actually breeding tubercles.

However, this is not a 100% indication that the female is gravid. But it can very well mean that the male is ready to spawn.

Watch Her From The Top

Here’s this last pointer to confirm gestation in goldfish if you’re still not sure. Observe the fish from the top – a bird’s eye view. If your fish is pregnant, you will notice that one side of her stomach is significantly bigger than the other side.

The side housing eggs will naturally look bigger and swollen.

Goldfish are hardwired to breed during warmer seasons. Thus, in the tank, they will get the cue and begin spawning if you increase the temperature by a couple of degrees.

How To Set Up a Goldfish Breeding Tank?

You’d at least need a 30-gallon tank to initiate goldfish breeding. First, make sure the tank is fully cycled. You have to emulate the original tank’s parameters as closely as possible.

Equip the tank with a sound filtration system, plenty of plants like hornwort, a heater to maintain a stable temperature, and a spawning mop.

A spawning mop is indispensable. It won’t just protect the tiny eggs and fry from the parents but will also make it easier for you to remove the fry into a separate tank once they’re hatched.

How To Set Up A Goldfish Fry Tank? And How To Care For Them?

A 10-gallon tank would be enough for goldfish fry. Any tank bigger than that will make it difficult for the tiny fry to find food. And they’re pretty susceptible to starvation early on in their lives.

You can leave the substrate bare, making it difficult for the fry to find food.

For filtration, use a sponge filter, so it doesn’t suck up your tiny fry. And don’t forget to perform regular water changes.

The fry will rely on the nutritious yolk sac for a couple of days after hatching. So you don’t need to feed them until then.

Around the fifth day, once they become free-swimming, here’s a list of food you can give them:

How Often To Feed Pregnant Goldfish?

A healthy adult goldfish can easily sustain on one meal per day. However, when gravid, a female will carry eggs and attend courtship from her fellow suitors. Thus, you must fortify her diet for extra energy.

You can feed her twice or thrice a day, gauging her health and dietary needs.

You can give her protein-rich foods like bloodworms, brine shrimp, and daphnia a few times a week.

Before you go, here’s a detailed video that chronicles everything from courting to fry’s development. Don’t miss it!

When Do Goldfish Mature Sexually?

Goldfish sexually mature at around 1 year of age. They’re about 4 inches long at this point.

Goldfish are egg-laying species. They don’t get pregnant. Instead, they become gravid. And gravid is a term reserved for when the fish carries eggs inside her body.

And it turns out that there’s no one definitive gestation period. The female will carry eggs in her body until they’re all ready to be fertilized by males.

Goldfish are egg-scatterers. And they eat their own eggs. Therefore, even though they lay thousands of eggs, only a handful of them make the cut.

We suggest getting a breeding mop and removing the parents from the tank immediately after spawning is complete if you’re serious about breeding goldfish. \