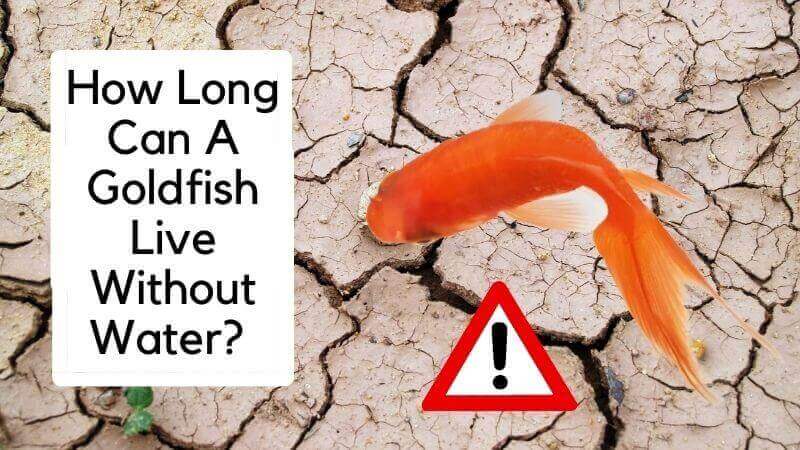 Goldfish are hardy fish. There’s no denying that. But there’s also this quote: “Like a fish without water,” right?

While most fish struggle for a single gasp of air when taken out of the water, some have adapted to live on land as well for extended periods.

So, where do goldfish fall? How long can a goldfish live without water?

The answer may surprise you. So, take a seat!

How Long Can A Goldfish Live Without Water?

Let’s be clear. There’s no one certain timespan etched in stone when it comes to answering how long a goldfish can live without water. But in most cases, they can easily go on for over an hour. The duration and chances of living can be extended quite profusely if there’s at least some water nearby.

The answer to this query depends on quite a few variables.

While the fish’s age and health status and the room’s climatic condition play pivotal roles, the area on land the fish landed is the most critical factor.

Suppose the goldfish in question jumped out of the tank onto a non-absorbent surface like a wooden floor or tiles. In that case, the little amount of water that the goldfish brought with it while jumping out will not be absorbed into the land surface.

Therefore, the fish can live for several hours – possibly up to 3 hours or more.

How Long Can A Goldfish Live Without Oxygen?

The general consensus is that goldfish can go without oxygen for anywhere between a few minutes to a couple of hours, depending on the fish’s health and age.

However, one study has shown that goldfish and their wild cousins, crucian carps, can survive without breathing oxygen for more than 5 months.

And turns out they can do so because they have evolved to have a unique set of enzymes, which, when oxygen levels plummet, ultimately help convert carbs into alcohol that they release through the gills.

Apparently, when they metabolize carbs anaerobically, the end product is not lactic acid but alcohol! And alcohol is a lot easier to remove from their bodies. Isn’t that so impressive?

Here’s an article that covers the topic in depth if you’re interested!

What Happens To Goldfish After They Jump Out Of The Water?

Some species, like mudskippers, can comfortably live for a good course without water. But, unfortunately, your goldfish isn’t blessed with prowess. When out of the water, the fish will die – sooner or later. And that’s because the gill arches of the fish collapse when they’re out of the water, leaving the blood vessels exposed without any oxygen to intake.

The goldfish will flap its fins and jump around in an attempt to find water by any method possible. And when on land, the oxygen supply is deduced as they can’t respire using oxygen present in the air.

Consequently, the fish will slowly and painfully succumb to death.

How To Know If Goldfish That Jumped Out Is Dead Or Alive?

The signs of a goldfish dead from suffocation are:

How To Euthanize Goldfish That Jumped Out Of Water?

If you’re positive your fish isn’t going to make it despite your efforts to resurrect it, you can euthanize it using clove oil. Using clove oil is the most humane way to kill a fish.

To do so, place the fish in a bucket full of water. Then add around 0.4ml of clove oil per liter of aquarium water. The clove oil should be slightly diluted with warm water before adding it to the aquarium.

Don’t add all of the oil at once. Instead, do it over 5 minutes or so.

How To Revive Goldfish That Jumped Out Of Water?

The first step is to stop panicking. If you’re stressed, things will only go south from here. I’ll lay down the steps one by one now.

Step 1: Place the fish in a suitable water container

Immediately pick up the fish (gently) and place it into the cool water from its tank. Cool water contains more oxygen than warm water. The water will immediately fill life back into your dehydrated fish.

Step 2: Get Rid Of The Dirt Off The Fish

Now you need to gently rinse off any dirt and debris that might be sticking to the goldfish’s skin. Pay special attention to the gill area. Very carefully pry open the gill covers and remove the dirt. If the gills still appear red, it’s a sign of good health.

Gently stroke the sides of the fish to remove dirt from the other parts. You can also try moving the fish in your hand inside the tank to clean it.

Most often, when the fish is struggling to breathe, you will notice that the gills are glued together – leaving no room for oxygen to get inside. And if that’s the case with your fish, lightly unglue the gills using your fingers.

Then, you can gently stroke the fish’s underbelly to prompt air movement through the gills.

Step 4: Increase Aeration In The Tank

Now you should place the goldfish next to an air bubbler or a region with good water circulation. You can also carry out a partial water change to maximize aeration.

In commercial settings, when breeders need to revive fancy goldfish, they will keep the fish in a bag half full of water and half full of pure oxygen. They are also often injected with dexamethasone, which encourages the revival of the senses.

The fish may still have sustained tissue damage even after a successful revival. So, treating the water with a stress conditioner will create a healthy and conducive environment for the fish.

Once the fish has calmed down and looks visibly okay, you can supplement with salt water treatment or chlorophyll treatment to speed up the recovery and promote wellbeing.

For instance, treating water with Epsom salt helps the fish eject excess waste from its body. As a result, the fish will swim easily and heal the wounds quicker.

On the other hand, chlorophyll will boost the fish’s immune system. When stressed, fish are prone to pathogens waiting for the right moment to strike.

You can use liquid chlorophyll treatment in the water or mix it in the goldfish’s food.

Why Do Goldfish Jump Out Of Water?

Goldfish don’t jump out of the water to commit suicide. Instead, they jump due to several other reasons like poor water quality, crowded living conditions, and stress. That being said, sometimes, healthy fish jump out from perfectly healthy environments too.

Goldfish, or any fish for that matter, are known to swim in the water – not jump out of it. However, once in a while, they’ll jump – and they’ll jump so high that they will fall off the tank.

Let’s have a closer look at the reasons behind this strange behavior.

The most common reason behind a fish jumping out of water is that it’s either being hunted or is hunting. Goldfish being the docile fish they are, being hunted would be the correct answer in this case.

Jumping makes an excellent defense mechanism as the fish can temporarily escape predation.

Goldfish are coldwater fish. But they’ve most often kept with tropical fish that require higher temperatures. Therefore, goldfish are always prone to be exposed to more warmth than needed.

If the water’s too toasty, they may jump out of it in search of a cooler environment. Little do they know the consequences of jumping out of the tank.

If I were a goldfish, I’d jump out of the tank, too, if the water was dirty. Who loves to live in a foul environment?

When the tank’s polluted and its nitrogen cycle is messed up, the environment will quickly become toxic for the fish, who may again resort to jumping.

At a glance, here’s what ideal water parameters for goldfish look like:

Goldfish grow quite big – you already know that. And they need a sizable tank to match their big size and activity levels. If the tank is cramped and there’s not much space to move around freely and live comfortably, the fish will naturally be forced to create an escape plan – the plan won’t work out; that’s a different thing.

The minimum recommended tank size for two goldfish is 20 gallons. But as always, the bigger the tank, the better it is. And please steer clear of bowls and spherical tanks.

All of the reasons mentioned above, collectively or single-handedly, are enough to deeply stress your goldfish. Aren’t they?

It’s not unnatural for a stressed fish to resort to weird antics out of desperation. And jumping out of the tank is one of them.

How Long Can A Goldfish Go Without Food?

A healthy adult goldfish can go without food for over 2 weeks. While a day or two of fasting poses no harm, depriving them of food for long will steeply decline their health over 2 weeks and can even kill them.

Final Words: How Long Can A Goldfish Live Without Water?

The answer to this question is super relative! It depends on several factors like the fish’s size and health, the surface it landed on, and the availability of water nearby.

Nonetheless, they have been known to survive for over 3 hours without water in some cases.

When your goldfish is on land, the fish’s gill arches collapse and leave the blood vessels exposed without oxygen to inhale. As a result, the fish will die sooner or later!