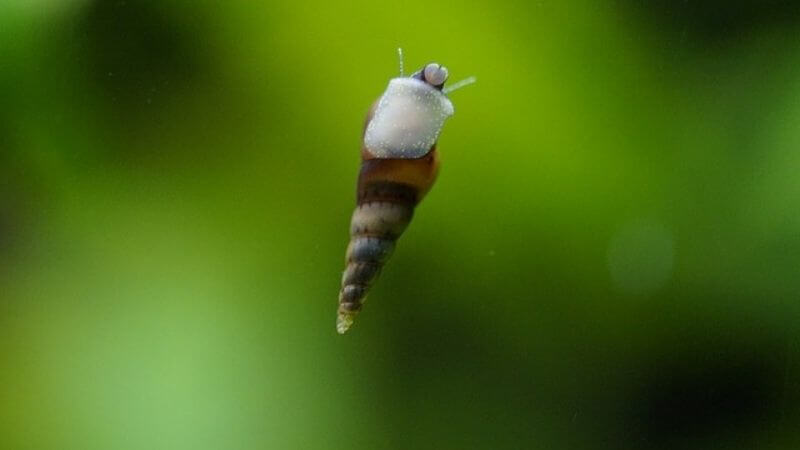 You might have noticed your aquarium snails sticking to the glass right above the water surface for hours. They even leave their egg clutches glued to the aquarium glass. This might make you wonder if aquatic snails do well out of water? But can they?

There are species like garden snails who dwell all their lives outside water. But what about aquatic snails? How long will an aquatic snail live out of the water if it manages to make the great escape?

How Long Can A Snail Live Out Of Water?

There are accounts of snails surviving even up to 72 hours, but that is an outlier. Usually, snails can stay for about 8 to 10 hours out of water. Their survival is highly dependent on factors like temperature, humidity, size, and species.

Factors that influence the snail’s ability to live out of water:

Snails loathe high temperatures because it dehydrates them fast. Unlike us, they are cold-blooded creatures. This is why their survival is highly dictated by the temperature of their environment.

And if it is fairly cool outside, it will be easy for them to maintain water content in their body – thus, surviving for a longer period even when they are not in their natural habitat.

If the snail is in an environment with less precipitation, its body will not have enough moisture. And when there’s a lack of water in the body, it will not produce slime in abundance, hampering every bodily function.

When out of their natural habitat, baby snails will dehydrate fast because their bodies aren’t developed enough to withstand harsh conditions. As a result, they cannot produce slime as quickly as adults do.

As I said, once they are outside water, their slime reserve runs out soon due to dehydration – making it nearly impossible to reach the nearest water source. So the only option left for baby snails is to stay coiled inside their shell and wait for a slow death.

Size is another factor that comes into play when a snail is outside of water. The larger the snail, the longer it can survive.

There are over 43,000 snail species. And different breeds have various thresholds to survive outside water. Although all snails were once sea-dwellers, some have evolved to live on land.

For example, garden snails are terrestrial, and they do not have to visit water bodies to hydrate themselves. Instead, they will draw water from food, air, and soil to alleviate their water needs.

On the other hand, aquatic snails need to immerse themselves in water most of the time.

Can Aquatic Snails Breathe On Land?

Yes, aquatic snails can breathe on land. Some have lungs, and some don’t. Despite that, they have permeable skin, allowing them to respire in most environments, even on land.

Depending on how they breathe, snails can be divided into three groups.

Usually, prosobranchs and opisthobranchs are often said in a single breath because both have gills, whereas pulmonate snails have lungs.

Prosobranchs is a category of snails with gills located in front of their heart. Most marine snail species like conches, cones, cowries, limpets, murexes, periwinkles, volutes, and whelks fall under this group.

Pulmonate refers to the group of snails that can breathe air with the help of pallial lungs instead of gills. Most terrestrial snails fall under this group.

These are the same snails that have developed love darts which they use while mating.

In contrast to the prosobranchs who have gills in front of their heart, opisthobranchs have gills behind their heart. But the commonality they share is that both depend on dissolved oxygen in the water.

Marine snail species like the bullina lineata and aplysia californica (sea hare) fall under this category.

Another distinct difference that separates them from the prosobranchs is their reduced or absent shell.

Unlike typical snails that use shells for protection, the opisthobranchs use other methods like releasing strong acids, warning coloration, and stinging cells to protect against predators.

Why Is My Snail Trying To Escape?

There could be several reasons behind your snail trying to escape the tank. Some of them are:

Although we claim snails to be hardy pets, it’s no excuse to keep them in subpar water conditions. If the water is dirty, just like fish or turtles, your snails will eventually rush to the surface to escape.

And if they get their window of opportunity, there will be a mass exodus. So, you should time and again check the tank’s ammonia, nitrite, and nitrate level.

I use this master kit from API to ensure my snails live in optimal water conditions.

Another reason your snails come out of the tank is the inadequate food supply.

Most aquatic snails’ primary food source is algae. And if the tank’s algae production isn’t self-sustainable enough to feed your snails, they will try to escape.

You should consider supplementing their diet with other food, like algae wafers and vegetables.

Snails proliferate rapidly, which is why you often see hundreds of them within weeks. And when this happens, the ammonia level in the tank will spike, making the habitat inhospitable.

Snails are peaceful pets that get along with everyone. But their calm demeanor is often exploited by aggressive tankmates. And when snails can no longer endure the harassment, they will try to flee from the hostile environment.

Therefore, you need to pair your snails with tankmates that share the same temperament.

Snails tend to stick their eggs to the tank lids. And this might leave the impression that they are trying to escape. So, don’t jump to conclusions yet because this is pretty normal behavior that snails display.

How Long Can Mystery Snails Live Out Of Water?

Unlike other aquatic snails, mystery snails’ bodies dry out sooner, slimming their survival chances outside water. As a result, they can only live for about 12 to 24 hours outside water at a stretch. However, if the temperature is low and the humidity level is high, they can even survive for a couple of days.

How Long Can Nerite Snails Live Out Of Water?

It might come as a surprise to you, but nerite snails are intertidal creatures and can live for 2 to 3 weeks out of water. Having said that, the duration they survive out of the water also depends upon the temperature and humidity level of the environment.

Can Garden Snails Live In Water?

No, garden snails cannot live in water. Unlike aquatic snails who respire through gills, garden snails meet oxygen requirements with the help of lungs. However, they can definitely survive in shallow water, not deep enough to drown them.

Final Words: How Long Can A Snail Live Out Of Water?

With most snails, the duration they can survive out of water depends upon two factors – temperature and humidity. But some species like the mystery snails tend to dehydrate soon.

Every aquarist should know the reason behind their snail’s escape. Perhaps the tank used for housing your slimy pets is too small for them. And as we all know, they are insane breeders, resulting in population growth at a compounding rate.

Also, other factors like poor water parameters, aggressive tankmates, and inadequate diet can trigger your snails to escape.

Be a responsible snail keeper and put some effort into delivering what your snails need to thrive so they don’t leave.