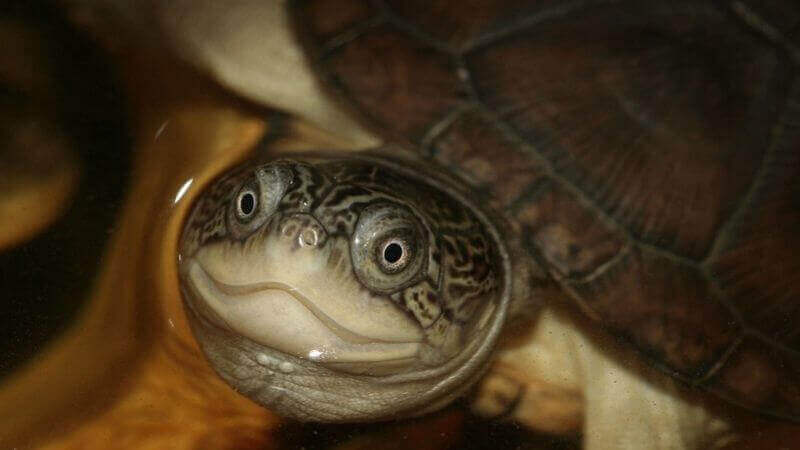 Aquatic turtles are called aquatic for a reason. They live near water bodies to constantly hydrate themselves.

However, they can survive for hours or up to weeks on land, depending upon the species.

Not all species of turtles are built the same. Some can remain out of the water and easily survive for days, whereas some suffocate outside water even within an hour.

In this episode of turtles, we will be putting the hard-bitten African sideneck turtles under the limelight and covering how long they can remain out of water.

How Long Can African Sideneck Turtles Be Out Of Water?

On a typical day, an African sideneck turtle can remain out of water for a couple of hours. But in dire circumstances, they can survive for 2 weeks without water. As for the brumation and aestivation periods, they can spend 5 to 8 months out of water.

The query we are about to tackle in this topic is a tricky one. There is no definite answer for it.

African sideneck turtles will lower their metabolism during aestivation and hibernation to cool down body temperature and decrease moisture requirements.

Surprisingly, they can remain out of water for months to avoid overheating and dryness.

African sideneck turtles are native to western and central Africa. They live in a sub-Saharan climate, which means their habitat receives little to no rainfall and is dry most of the time.

During summer, most ponds and freshwater sources in their habitat dry up, resulting in a bone-dry climate.

So, these African reptiles have to figure out ways to maintain the moisture level in their bodies to survive the drought.

Had they been faster like the wildebeests from the Masai Mara, they would have migrated to better pasture, or in their case, water sources, during summer. But it is turtles we are talking about!

Hence, the modern African sideneck turtles followed early reptiles’ footsteps – burrowing themselves under the soil. They bury themselves underground, where it is much cooler than the surface, helping them conserve moisture in their bodies.

This is how the sideneck turtles became adept at surviving drought in the arid lands of the hottest continent.

How long African sideneck turtles can survive without water depends upon several factors. They are age, health condition, climate, and time of the year.

Unlike adult turtles who bask all the time, baby African sideneck turtles spend more time in the water.

They will be most active at this stage and constantly have to hydrate their bodies to supplement their rapid growth.

As for adult sideneck turtles, they remain motionless on a basking platform, soaking UV rays.

An unhealthy turtle cannot remain outside water for a longer duration.

An adequately fed turtle with a hydrated body can survive for a much longer period than those who weren’t.

African sideneck turtles living in a high humid climate can live outside of water without frequent hydration.

Humid climates have moisture in the air, which turtles absorb with their famous butt-breathing technique and through their skin.

This allows them to stay outside water for lengthy periods.

Time Of The Year

If the temperature drops too low in their habitat during winter, i.e., below 44 degrees Fahrenheit, African sideneck turtles lower their activity and start brumating.

African sideneck turtles will also slow down their heartbeat and metabolism to conserve energy. Next, they will bury themselves below the water bed or even outside the water.

This process of brumation typically lasts about 2 to 5 months.

Also, when the temperature in the summer is too high, African sideneck turtles aestivate by burying themselves under the sand to maintain their body temperature. At this time of the year, they can live buried without water for several months.

How Long Can Baby African Sideneck Turtles Be Out Of Water?

Unlike adults, baby African sideneck turtles cannot stay out of water for much longer. They need food and water to sustain speedy growth. So, they will only be able to stretch it up to a day without water.

When a baby turtle goes through prolonged dryness, it will suffer from complications like indigestion and nutritional deficiency – thus, resulting in untimely death.

How To Tell If An African Sideneck Turtle Is Dehydrated?

Closed or sunken eyes are the conspicuous sign of dehydration in turtles. You can tell how severe dehydration is by observing the hollowness near the eyelids.

A significant amount of a turtle’s body weight is comprised of water. And when an African sideneck turtle is dehydrated, its body weight decreases drastically.

You can distinguish a healthy turtle from a dehydrated one by assuming its weight while handling. Weight loss is one of the early signs of dehydration in turtles.

Monitor the turtle’s weight periodically, so you don’t miss any signs of anomalies.

A dehydrated African sideneck turtle becomes listless. Even when poked in its limbs or neck, it will show little to no movement.

However, note that older turtles accustomed to their owners’ touch will also show similar signs.

Dehydrated turtles will rest only in one place and will not show any interest in swimming and foraging.

Watch out for wrinkled skin on your African sideneck turtle’s body. You can know if it is hydrated or not by pinching on its skin. If the skin doesn’t slide back to the normal position immediately, it is a sign of a dehydrated turtle.

Why Is My African Sideneck Trying To Come Out Of Tank Too Often?

Often, an African sideneck turtle will try to leave its tank because the water parameters or the temperature aren’t suitable. Also, if you have a pregnant turtle, it will often try to escape the tank to lay its eggs in a dry spot.

Several other reasons cause a turtle to leave the tank.

What Happens To An African Sideneck Turtle’s Body When Out Of Water?

First, the heat outside the tank will deplete the water content in their bodies. Then they will lose weight, followed by the appearance of wrinkles around the limbs and neck. Finally, the eyelids get sunken, and with no water in their digestive tract, they will not be able to ingest food.

When Can African Sideneck Turtles Go Up To Months Without Water?

Yes, African sideneck turtles can go up to months without water when hibernating or aestivating. At those times, they will lower their metabolism and cool down their bodies to use as minimum heat as possible.

Hence, they can live up to 8 months without water.

Usually, aquatic turtles cannot stay outside water for more than a day or two. But, it depends on several factors like climate, health, species, etc.

African sideneck turtles, however, are better suited to high temperatures in their habitat and can survive a week or two without water compared to other turtle species.

But, as they are aquatic turtles at the end of the day, they still need water to keep themselves hydrated and swallow their food.