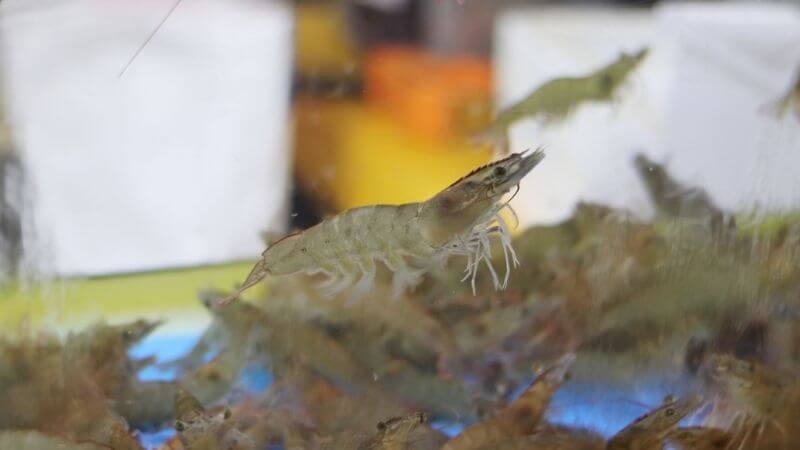 How long can Amano Shrimp Live out of Water?

Amano shrimp can live out of the water from 15 minutes to several hours, depending on the room’s temperature and humidity level. If there’s high humidity in the room, they will live for several hours until they are eventually dry (meaning dead). Also, if the weather is hot, their body won’t be able to cope with the high temperature outside water and will die soon.

Reasons behind Amano Shrimps Coming Out of Water

Several factors cause an Amano shrimp to come out of water. Let’s shed some light on them.

Stress has been the no.1 reason your Amano shrimps are jumping out of their tank. They can get stressed for several reasons. One of the prominent reasons for your Amano shrimp getting stressed is not maintaining proper water parameters.

You need to maintain the water temperature from 70 to 78 degrees Fahrenheit. Any less or more than this water temperature will cause your Amano shrimp to jump out from its water. Another water parameter factor is the pH level of water. Maintain the pH level from 7.2 to 7.5. Lightings can be standard as these shrimps have similar to that of fish. Also, keep the ammonia, nitrite, and nitrate level at a minimum in the tank.

If you are confused about meeting your Amano’s required water parameter, get a test kit online or at any local pet shop. This test kit will let you know the ammonia, nitrite, pH, and nitrate level in your tank.

No Suitable Tank Mates For Your Amano

Amano shrimps are a peaceful and gentle creature. They aren’t aggressive and aren’t hostile towards any other inhabitants in an aquarium. Furthermore, they do not have any defensive feature, nor do they possess any threat-bearing parts towards other creatures in their bodies. That is why you need to find good tank mates that are as peaceful as they are.

You can put them along with other species of shrimps and fishes like rasboras, tetras and guppies. Snails also are acceptable along with them. These creatures are gentle and get along fine with Amano.

Do not put your Amano with aggressive fishes like barbs, mollies, betta, angelfish, discus, and cichlids. Amanos get stressed when sharing their habitat with creatures huge than them. They grow only up to 2 inches, so get tank mates similar to their size or slightly bigger.

Overpopulation also causes your Amano shrimp to get out of water. It is recommended to keep 3 Amano shrimp in a 10-gallon tank. They are relentless algae eater, and small tanks won’t provide enough grazing area for Amano’s troupe. This will cause your Amano jumping out of the water.

So, get a tank that has more horizontal space for your Amano to graze. Also, the ratio of 3 gallons for 1 shrimp should be kept in mind while getting a tank for your Amano.

When there are too many inhabitants in the aquarium, then many things will be deficient. E.g., the food will have to be shared among many, and only the bigger ones will feed off them. Oxygen levels will also deplete as the bio-load increases, and Amanos will try to escape from the tank for more oxygen.

Water Current Could Be A Factor Too.

Because of the substrate’s lows and highs, there could be a presence of water current in your tank. You might not notice, but fishes, shrimps, and all aquatics feel it.

And when your shrimp thinks that there is a water current in the tank, he will believe that there’s more food on the lower end of the current and will try to venture out of the tank.

This could be the reason, even though the criteria mentioned above are maintained, yet your shrimps are jumping out of the tank.

How Do Amano Shrimp Jump?

Amano shrimps use their tail to jump. They will coil up their tail and kick to bring outthrust to jump at high speed. Besides tail, they also have powerful hind legs, which is why they can walk backward faster. You will notice this when they are in the presence of a predator or a bigger fish.

How To Stop Amano Shrimp From Coming Out Of Water?

Get a Tank Cover

If your Amano is trying to escape water more than once, then you can get a tank cover from either a local store or from amazon. A tank cover will prevent your Amano from escaping. You can get them with several options. Use an air screen cover that won’t be airtight and keep the temperature maintained whenever your heat is down.

By Not Filling Point In Your Tank

You shouldn’t fill your tank up to the rim as your Amano shrimps can jump out of water. Leave at least 2 inches of gap between the rim and water level. Doing this will dissuade your Amanos from jumping off the tank.

Get A Troupe Of Amanos

You shouldn’t keep only one Amano shrimp in an aquarium. They are social creatures and need companionship in their habitat. And when they are left in solitary, they will try to come out of the water feeling distressed.

Final Words On How Long Can Amano Shrimp Live Out Of Water.

It is not a normal thing that a shrimp leaves its habitat and comes out of water. So if you see one, then act immediately to take it back into the water because shrimps cannot survive for long in the open. Their moist body will dry up and won’t be able to handle hot and room temperature.

So you need to look for the reasons your Amano shrimp is coming out of water. Look for factors like water parameters, bad tank mates, the water level in the tank current level, and more.