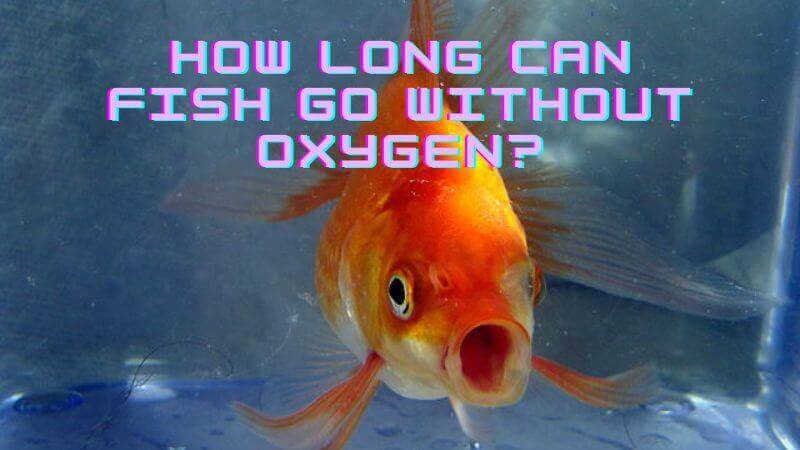 Us humans, the most advanced species to walk the face of the earth, can live without oxygen for 4-6 minutes. Now that’s not very impressive, is it? So, what about our fish friends that live their entire lives cooped up in our little tanks?

How long can fish go without oxygen? A few minutes? A few months? The answer will surprise you.

How Long Can Fish Go Without Oxygen?

A fish cannot go on for a long time without oxygen. Depending on the fish’s health and age, it can live anywhere between a few minutes to a couple of hours before suffocating to death. However, there are a few exceptions, like goldish, who can live without breathing oxygen for over 5 months!

Yep, you read that right! 5 months – around 150 days – without oxygen. Previously, it was believed that only certain viruses and single-celled microbes could live without oxygen long-term.

But the unassuming and demure goldfish surprised everyone with their astonishing ability to not just live but thrive without oxygen for several months. So how on earth is it possible?

I’ll tell you everything.

How Can Goldfish Survive Without Oxygen For So Long?

For humans, like most other animals, a lack of oxygen can prove fatal within minutes. We sure can metabolize carbohydrates without oxygen, but this process would produce toxic lactic acid, which quickly builds up in our bodies.

Needless to say, this whole ordeal is fatal.

The same thing is true for most fish species we know.

But what sets goldfish and their wild crucian carp relatives apart is that they have a set of special enzymes that convert carbohydrates into alcohol when the oxygen levels drop, which is then released through the gills.

So, when these fish metabolize carbs anaerobically, the end product is alcohol but not lactic acid. And apparently, alcohol is much easier to remove from the body than lactic acid.

This incredible discovery was made by researchers from the University of Oslo, Norway.

Scientists believe this adaptation evolved some 8 million years ago in common ancestors of goldfish and carps through a process called whole-genome duplication.

Now, whole-genome duplication is when an organism develops an extra set of genes by chance, which can be reconditioned to take on new functions. By chance – what are the odds, right? It’s crazy!

But in retrospect, it may not be as crazy as it seems.

After all, over 80% of the ocean has never been explored, mapped, or even seen by humans. We don’t know what lurks beneath the big blue blanket.

Turns out that a far greater percentage of the surfaces of Mars and the moon has been mapped, explored, and studied than our own ocean floors.

So, I wouldn’t be surprised if one day we discover a fish that doesn’t even require oxygen at all!

Having said that, among the 33,000 known fish species, only a chosen few can live for a prolonged period without oxygen. The rest will survive for a few minutes.

If the fish in question is really hardy, it can live for a few hours – but not more than that.

Are Sponge Filters Good? 7 Reasons Why!

How Long Can Fish Live Without Oxygenated Water?

Once again, the answer can range from a few minutes to a few hours. The fish’s activity level and the water temperature also play critical roles in determining how long the fish will survive.

If the temperature is low and the activity level is minimal, the fish can survive without oxygen for a bit longer.

Now before we wrap up, let’s have a quick look at some of the most frequently asked questions on the subject.

By now, it’s pretty clear that fish absolutely need oxygen to live. But how much do they really need? Let’s find out.

How Much Oxygen Do Fish Need?

Most fish need at least 6 parts per million (ppm) of dissolved oxygen to survive. However, to err on the side of caution, 8 ppm or above is recommended.

How To Generate Oxygen in Aquariums During Power Cut?

Oxygen enters the water through a direct absorption process, which is enhanced by turbulence. So, the filter, the air pump, and the air stone help to create turbulence and reinforce gas exchange at the surface. But how do you keep the tank oxygenated in case of a power cut?

It’s a lot simpler than you think.

To add oxygen to the water, you need to pour some water into the tank from a certain height. The water will pick oxygen on its way down. So, how much oxygen is added depends upon how high you pour the water and how many types you carry out this procedure.

It can be explained in 2 steps.

No rule is set in stone for how many times you should carry out this procedure. You can judge for yourself depending on your tank’s environment.

If you’re doubtful, go ahead and do it more. There’s no harm in it.

And if you find the fish gasping for air at the surface, you must repeat these steps more frequently.

I recently bought a battery-powered air pump to keep my tank oxygenated during power outages. Here’s the one that I got:

What I love about it:

Here’s a look at some factors that cause the oxygen level in the water to deplete:

Overcrowding: All fish need oxygen to survive. If there are more fish in the tank, the demand for oxygen will be high, and the supply will be low.

High temperature: Hot water holds less oxygen than cold water. The ‘saturation concentration’ for oxygen gets lower as the water gets warmer.

Still water: Gas exchange happens when there is water movement. If the water is still, it hinders the gas exchange process, thus lowering oxygen levels.

Waste buildup: Beneficial bacteria require oxygen to break down the waste material produced in the tank. If there is more waste, they use up more oxygen.

Algae: Algae directly competes with fish for oxygen. For algae to decompose, it requires oxygen – decreasing the amount of dissolved oxygen required for fish.

How To Know If The Tank Has Low Oxygen Level?

The best way to know if the tank has a low oxygen level is to check with a DO meter like this one:

The oxygen level should never be below 6 ppm. The following are some signs of depleted oxygen level in the tank:

How Long Can A Betta Fish Go Without Oxygen?

Bettas have evolved to live in less oxygenated water, but it doesn’t mean they don’t need oxygen. They can only live for a few minutes without oxygen. At best, they’ll make it for a few hours.

Interestingly, bettas are labyrinth fish, named after a special organ called the labyrinth, of course! It allows the betta to breathe air from the surface of the water.

So, if the level of dissolved oxygen in the tank is low, the fish will swim to the surface and breathe in oxygen.

How Long Can Fish Live Without Oxygen In A Pond?

A fish can live without oxygen in a pond for a few minutes or hours. However, if the fish in question is a goldfish, it can live for around 5 months without oxygen.

You can make do without adding an air pump or a bubbler if you have a big pond with enough water movement. However, a filter is still essential. There’s no alternative.

How Long Can Tropical Fish Survive Without Oxygen?

‘Tropical fish’ isn’t a taxonomic group. It’s a general term used for fish found in tropical environments. There are thousands of species under this group, and none of them can live for long without oxygen.

Depending on how hardy the fish is, it can only live for a few minutes or hours.

How Long Can Plecos Live Without Oxygen?

Plecos are hardy fish, but they’re not hardy enough to survive without oxygen. Like most fish we know today, they can live for a few minutes or hours at max.

How Long Can Goldfish Live Without Oxygen?

Goldfish are in an entirely different league. They can live without oxygen for more than 5 months, according to research conducted by Norwegian scientists.

When the going gets hard (I mean, where the oxygen supply is low), goldfish resort to metabolizing carbs anaerobically. Most animals, including us, create lactic acid as a byproduct during this period.

However, goldfish create alcohol. Yes, alcohol! And alcohol doesn’t have a hard time getting out of the fish’s system through gills as lactic acid does.

Recommended: Do Goldfish Need An Air Pump? | The Real Truth

How Long Can Fish Survive Without Food?

Most adult fish can go without a meal for a week or two. Large and sedentary fish can last considerably longer than small and active fish.

But bear in mind that fry and young fish don’t have fat stored in their body as adult fish do. Therefore, they can only go for a few days without a meal.

Recommended: How Often To Feed Cichlids?

How Long Can Fish Survive Without A Filter Running?

The answer to this question is going to sound quite vague. A fish can survive without a filter running for anywhere between a few days to a few months. It depends on the tank’s environment and stocking number.

For example, a single betta in a 100-gallon tank could survive for months without a filter before the water becomes inhospitable.

However, 3 goldfish in a 20-gallon tank without a filter could only live for a few days before the ammonia and nitrite levels spike up and make the water desolate.

Final Words: How Long Can Fish Go Without Oxygen?

Like us, fish need to breathe in oxygen to survive. There’s no alternative here.

Therefore, they don’t live for long without oxygen. The duration can last anywhere between a few minutes to a few hours. Therefore, it’s pretty important to keep the tank oxygenated at all times with the help of a filter, air pump, and bubbler.

Having said that, goldfish and their carp relatives can survive without oxygen for at least 5 months, according to a breakthrough study!