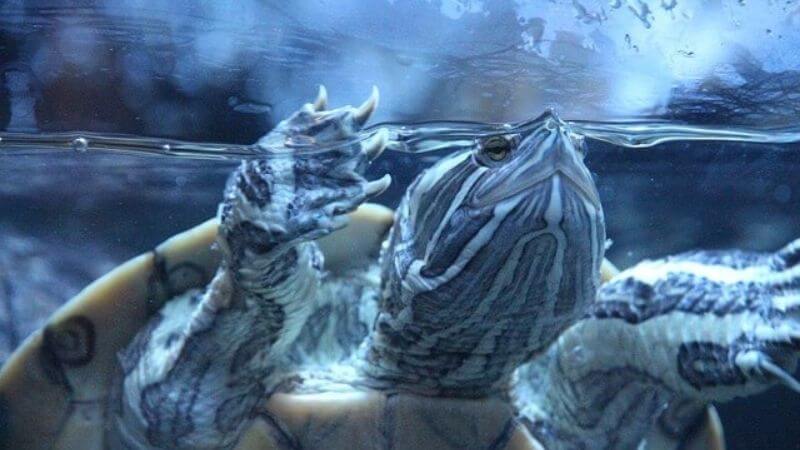 Red-eared sliders are undoubtedly America’s favorite turtles. These docile, friendly creatures can make rewarding pets. But they can also be a handful in inexperienced hands. In my quest to answer all queries about turtles, one blog at a time, here’s an answer to a frequently asked question.

How Long Can Red-Eared Sliders Be Out Of Water?

Red-eared sliders are considered semi-aquatic turtles because they live in ponds, marshes, lakes, and slow-moving streams with shallow, muddy bottoms. Thus, the answer to how long can red-eared sliders be out of water is around 8 hours. But this answer is subjective to the weather.

If it’s fairly cool outside, it’s reported that they can stay out of water for a couple of days.

However, if they live in the land for too long, it can lead to digestive complications.

Red-eared sliders don’t love or depend on water bodies as much as sea turtles do. But they still prefer to be in or around water. So, I’d say they spend about 75% of their time in water from what I’ve read and experienced.

In their natural setting, the only time they usually come out of water is to bask. Basking is when the turtle comes to the land to dry and warm its skin and shell in the sunlight.

Now that you know the answer to your query, let’s move on to other interesting questions.

How Long Can Red-Eared Sliders Be Underwater?

While we’re on the topic, let’s talk of this unique breathing phenomenon.

During hibernation, turtles receive a limited amount of oxygen they require through their butt, also known as the cloaca. This process is known as cloacal respiration. Due to the high density of blood vessels present in this all-purpose orifice, it can take up oxygen directly from the water.

Here’s a relaxing video of a Red-Eared Slider swimming:

How Long Can Red-Eared Sliders Live Without Water?

An adult red-eared slider, under healthy conditions, can live out of water for 7-10 days at least. But if it’s left without water for a longer, inconvenient duration, this will result in dehydration.

It can probably live outside water for a month or two in a humid environment in terms of survival. But that would pose several health hazards, with dehydration and indigestion being just two of many.

However, it’s important to note that baby red-eared sliders depend albeit more on water. So, they probably can’t go without it for more than a week, in my opinion.

Going without food and water during hibernation is an entirely different concept. But in general circumstances, red-eared sliders should have easy access to both land and water.

Turtle and Fish Together? These 3 Species Can Be Your Best Bet!

Do Red-Eared Sliders Bite? Be Careful In These 6 Situations!

Do Red-Eared Sliders Need To Be In The Water?

Although red-eared sliders can live several hours outside of water, they should be ideally in or near the water. Water is critical to keep their bodies hydrated, soothe their skin, help them chew and expel waste, among others.

Since red-eared sliders don’t have teeth and don’t produce saliva, it’s hard for them to chew and swallow food independently. As water soaks the food, it becomes soft and chewable for easy digestion.

Thus, they absolutely need water to swallow their food.

That being said, they can eat and swallow without water, but it’s just a more difficult and painful process.

Water also helps to soothe sensitive skin that gets damaged due to excess heat.Likewise, from courtship to copulation, red-eared sliders need to be underwater for their mating process.

What Happens If You Take A Red-Eared Slider Turtle Out Of Water?

Given that water plays such an important role in a red-eared slider’s life, what do you think will happen when it’s taken out of water? On a scorching day, your pet would lose water from its body a lot faster than what’d be lost in cooler months.

Thus, I’d strongly advise you not to take your turtle out of water for long durations in the summer months.

In addition to temperature, humidity also plays a significant role in determining how much time your turtle should spend outside of water. When the relative humidity is high, your turtle loses little water from its body.

Why Is My Red-Eared Slider Staying Out Of Water?

Occasionally coming out of the water shouldn’t raise eyebrows, but if your red-eared slider is trying to avoid water, this is concerning. The reasons behind this could be poor water parameters, bullies in the tank, incorrect temperature, or preparation to lay eggs.

Let’s discuss the above reasons one by one now.

As an ectotherm, a red-eared slider’s body temperature changes with the change in environment. Thus, if the water in the enclosure is too cold for its liking, this could be the reason your turtle is constantly trying to get out of the water. It just wants to bask!

The water temperature should ideally be between 74-78°F for red-eared sliders.

This heater by BinChang has pretty great reviews on Amazon. The price, too, seems quite reasonable for a 500-watt heater.

I like the fact that it displays water and sets the temperature at the same time. That’ll be helpful to observe the real-time temperature change easily.

Turtles produce a good amount of waste because they poop a lot and are messy eaters. Funnily enough, however, they can’t stand dirty water. So, if your turtle’s trying to escape water again and again, maybe it’s time to re-evaluate the tank’s condition.

Here’s my recommendation for a filter by Penn-Plax.

Sorry if I sound pushy, but this one had too many promising reviews and great features that I couldn’t resist! Head over to Amazon to see what I mean.

Turtles are solitary creatures that don’t often get along with anyone. So, if you have more than one turtle in your tank, there’s a good chance that there’s a power struggle regarding territory and dominance. And sometimes, the bullied turtle will try to escape – hence, coming out of water.

Make sure to check for signs of injuries that bullying can inflict. Also, you need to ensure that there’s plenty of space for all parties. At least 10 gallons for 1 inch of the body! If you have a small tank, you’ll definitely have to update.

And if a big tank still doesn’t solve the problem, you can use a divider in the tank.

How Much Water Does A Red-Eared Slider Need?

Compared to other popular species like painted and box turtles, red-eared sliders are bigger in size. Females can grow up to 12 inches, whereas their male counterparts are a couple of inches smaller. Thus, you’ll need to arrange at least 10 gallons of water per inch of the body.

The general rule is that the tank should also be at least 5 times the turtle’s length and 3 times as wide. For example, a 6-inch-long slider will need an enclosure measuring 12 inches deep, 18 inches wide, and 30 inches long.

Since these turtles in question are semi-aquatic beings, they need land for occasional recreation and lots of basking. The basking lamp should be set right above the land.

How Can I Know If My Red-Eared Slider Is Dehydrated?

A turtle’s physiology is similar to ours in the sense that their body, too, is made up of 60-70% water. One of the most common signs of dehydration in red-eared sliders is sunken eyes, and in severe cases, the corneas are dimpled. If your turtle’s weight seems light when you pick it up, that’s another telltale sign.

Dehydration leads to fatigue, lethargy, appetite loss, and stress. Basically, it’s the entry point for many other complicated health conditions.

So, if you see your turtle staying still and not indulging in things that it previously enjoyed, dehydration could be the reason behind it.

Here’s a quick test to check if your red-eared slider is dehydrated.

Gently pinch the skin on the turtle’s limbs. The skin should lie flat almost instantly if they’re hydrated. If it moves back slowly or not at all, this means your turtle’s dehydrated.

However, this method is not 100% accurate or has strong scientific backing. So make sure to ring the vet if you have any reservations.

Why Won’t My Red-Eared Slider Get Out Of The Water?

A slider turtle spending the majority of time in the water shouldn’t come across as a surprise. But if you feel that it’s trying to avoid land at all cost, there could be some red flags. The underlying reasons could be your turtle’s hibernating, feeling threatened, or basking area isn’t suitable.

The most common reason behind this is your turtle is in brumation. Well, you would, of course, know if your turtle is hibernating. So let’s move to the next reason.

If the basking area is inadequate or dirty for your turtle’s liking, it’ll try to skip basking.

However, basking is crucial to their health. So make sure to revamp and refurbish the basking area.

Here’s a super pretty and minimalistic basking platform from Penn-Plax that I absolutely love.

Turtles often prefer staying in water if they feel threatened or sense a potential predator. So, make sure that your cat and dogs are behaving themselves.

Transferring the tank to a more peaceful location in the house could also help.

Conclusion On How Long Can Red-Eared Sliders Be Out Of Water?

So we’ve come to the end of this really interesting blog. The questions and answers featured here are amusing, aren’t they?

I had a good time writing this and hope you loved reading as well.

So, to conclude, the answer to how long can red-eared sliders be out of water is around 8 hours. However, different factors like climate, your turtle’s age, health, and lifestyle will influence its ability to stay out of water.

As semi-aquatic beings, red-eared sliders rely on water for many bodily functions. So, it’s best to leave them in and around water all the time.