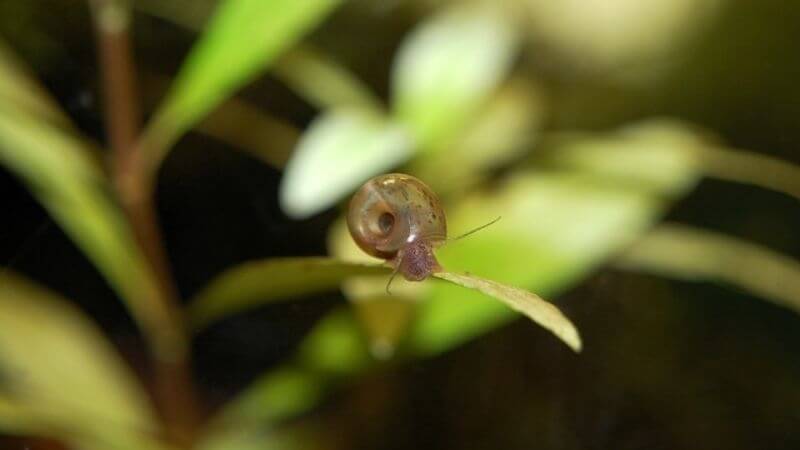 There are more than 4000 species of freshwater snails. So, it can be hard to give a definite answer on how long these snails live.

But if you are raising some popular aquarium freshwater snails, you might want to know how long will they be by your side.

Without further ado, let’s get into details.

Depending on the species, freshwater snails in the wild can live anywhere from 1 to 5 years. However, snails in captivity are even known to make it past their tenth birthday. Their lifespan also depends upon their sizes. Smaller species have a shorter lifespan compared to larger ones.

Unlike snails in the wild, those under human care have no threats from predators. And this contributes to their longer lifespan.

In addition to that, proper diet and correct water conditions help boost their longevity.

Which Freshwater Snail Has The Longest Lifespan?

Lanistes nyassanus, a species from the apple snail family, has the longest lifespan among freshwater snails. Native to Lake Nyassa in Malawi, there are records of them living up to 10 years.

They are one of the largest freshwater snails as well. On average, their shell height is about 68 mm and their width is about 75 mm.

Did you know there are other species of snails that have a much longer lifespan than freshwater ones? For example, the Syrinx aruanus, aka the Giant Whelk, is a saltwater snail that can survive for over 30 years.

Which Freshwater Snail Has The Shortest Lifespan?

Bladder snails (physella acuta) are a species of freshwater snails with the shortest lifespan. They can live up to 9 months in captivity. However, they reproduce much faster than other species – which makes up for their quick mortality.

Even as adults, they only reach about half an inch long. This puts them at risk of predation from aggressive tank mates.

As I mentioned earlier, not all freshwater snails have the same lifespan. Often the larger species tend to survive for longer periods.

Alongside size, the lifespan of freshwater snails depends on several other factors like:

Let me brief them in detail.

Biological makeup plays a crucial role in the determination of every creature’s lifespan. It is the same with snails, too. Genes decide the snail’s physical size, metabolism, cardio-vascular efficiency, age of maturity, and fecundity.

Genes are the readymade blueprint that external factors cannot easily alter. So, no snails can live longer than the attributed genetic template. For example, a bladder snail’s lifespan cannot be compared to that of apple snails due to the inherited differences in their genes.

So naturally, water parameters play a defining role when it comes to gauging how many winters your snail will see.

An increase in metabolism can have detrimental effects on a snail’s health. A faster metabolism will cause them to grow quickly, resulting in a shorter lifespan – only living for about a year to 18 months.

The ideal water temperature for snails falls between 65 to 82 degrees Fahrenheit. So, if you keep the temperature on the lower spectrum, your snails will survive longer.

But make sure that you don’t go too low than the preferred range. If the mercury drops any lower than 50 degrees Fahrenheit, it can kill your snails within days.

These trinity values reflect the availability of nutrients, microbial activity, biological functions, and the behavior of chemicals in the water.

Remember that freshwater snails do well in hard water.

All these three should be at 0 ppm. Although snails are hardy creatures, any traces of these nitrogen byproducts can be fatal.

You can keep them in check by regularly performing partial water changes.

And if you are introducing new snails to the tank, make sure to acclimatize them beforehand.

Molluscs and crustaceans cannot tolerate even a slight amount of copper.

If you are keeping fish and snails in the same tank, you have to be extra cautious when treating fish for pathogens.

The medication we use for treating protozoa and fungus in fishes has copper.

So, to prevent this, take either the snail or the ill fish out in a separate container and quarantine them during the treatment.

Although snails are resistant to bacteria and parasites, they can still harbor disease-causing agents. These parasites leached on them can transmit to humans if necessary precautions aren’t adopted while handling.

Maintaining a spacious and healthy habitat is equally essential for your snails to have longer lives. A tank size of at least 40 gallons will be enough to house your snails.

But remember that snails proliferate rapidly. So, do not house any more than your tank’s capacity. Overcrowding will disrupt the nitrogen cycle and cause your snails to die soon.

Different species of snails have different dietary requirements. They can be herbivores, carnivores, omnivores, or detritivores.

However, all snails need calcium in their diet. Calcium helps in the development of a snail’s shell structure.

A lack of calcium in their diet can induce several deformities – consequently compromising their lifespan.

For example, calcium deficiency can cause snails to have thin and fragile shells, making them vulnerable to shell damage.

To meet the necessary calcium demand, add calcium carbonate to their tank water. Many hobbyists also use crushed or powdered marble, seashells, limestone, and eggshells as alternatives.

However, adding these can raise the pH value of the water.

Do not let the pH value increase by more than 0.5 per day at max. This can give your snails a hard time acclimatizing.

Species Of Freshwater Snails And Their Lifespan

Now that we’ve discussed how long some freshwater snails live, let us go through the reasons why some of them die untimely in captivity.

Why Do Snails Die?

Hobbyists often share sad news about their snail’s early demise on forums. Though snails make tough pets, they can still die unexpectedly, and you end up unable to put your finger on it.

There can be several reasons behind this tragedy. This could be due to:

Final Words On How Long Do Freshwater Snails Live

Compared to terrestrial and saltwater snails, freshwater snails have a shorter lifespan. But if you maintain the correct water parameters and feed them a healthy diet, they can survive for a good couple of years.

Also, ensure your snails are getting enough calcium to keep their shells intact. Provide calcium supplements either through their diet or by adding them directly into the water.

Raising snails isn’t rocket science. Get a few things like diet and environment right and your snails will be healthy and have a long life.