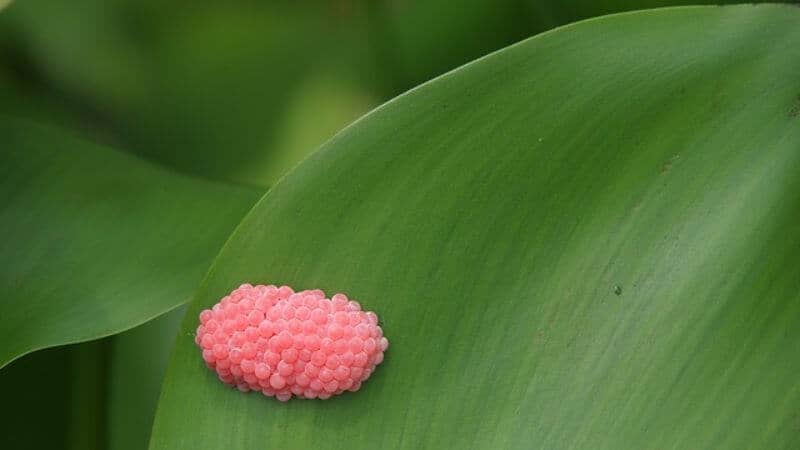 There are over 43,000 snail species worldwide. So, it is hard to give an absolute answer for anything related to snails. For instance, how long does it take for snail eggs to hatch? Identifying the species is crucial in answering this query.

Some of us like to watch these tiny pals come to life and grow, whereas some may want to exterminate them before they hatch. Nobody is judging!

So, without further ado, let me share how long snail eggs take to hatch.

Most snail eggs take around two to four weeks to hatch. Obviously, we first need to make sure these eggs are fertilized. The hatching period depends on the snail species. Although there are claims that warmer water accelerates the hatching process, there isn’t enough empirical evidence to support this statement.

In the beginning, it might be hard to know whether the snail eggs are fertile or not. For untrained eyes, fertilized and non-fertilized eggs look the same. Also, the moisture content in the eggs during the initial phase can make it hard to tell the difference.

But if you instigate after a couple of days, you will notice a black spot that develops inside the eggs. This is a hint that the eggs are fertilized. But keep in mind that not all eggs fertilize healthily.

The infertile ones appear darker and do not have black spots on them. And what’s more, these barren clutches also give off a foul odor.

Multiple factors can hasten or delay the hatching process. For example, temperature, species, and water parameters are also considered few among many.

Most snail eggs hatch faster when the temperature is in the higher range of the preferred scale.

Generally, a warm habitat will yield more hatching turnovers. The preferred temperature for snail eggs to hatch is 76 to 82 degrees Fahrenheit.

Scientific explanations suggest that higher temperature in the habitat directly corresponds to higher embryonic activity inside the eggs. This causes the eggs to hatch quickly.

But what happens if you keep your snail eggs at colder temperatures?

Glad you asked. Ice crystals begin to form inside the egg and might permanently wreck the embryo’s internal system, which is about to initiate or has already been developed.

Therefore, you need to get the temperature right if you want these eggs to hatch.

There are more than 43,000 species in the snail family alone. So, there is bound to be variation in their appearance, characteristics, diet, habitat, and reproduction system.

Hence, the duration of the hatching period also differs from species to species.

For example, Mystery snail eggs will take about two to three weeks to hatch, whereas a giant African snail’s eggs take about four to five.

Several sources from various researches have stated that water snails have a shorter incubation period than terrestrial ones.

The hatching duration will be normal if the eggs are nested in environments with suitable water parameters.

But if conditions like a spike in ammonia, nitrite, or nitrate levels occur, they will wreak havoc on the eggs.

And even if the eggs do hatch, it isn’t guaranteed whether they will be fertile.

So, you need to get yourself a reliable water testing kit like this one from API.

How Do You Take Care Of Snail Eggs?

You will have two options with snail eggs: remove or incubate them.

If you want to remove them, scrape them off using a thin, sturdy card. Now you know when your expired cards come in handy.

But if you want to let these eggs hatch, put them in an incubating chamber. However, you need to scrape them first.

Wait 24 hours before you lay your hands on the clutches. Then, try to wiggle the clutches gently. Apply as little pressure as possible. Once it loosens up, use the expired credit card to scrape it off.

While you are doing this, there will be some casualties. You can’t save all of them.

You will definitely break some eggs during the process but worry not – there are about 200 to 300 eggs in a single clutch.

Now let me brief you on some of the hatching methods.

We begin by making a breeding trap. These traps are placed above the water line/surface to let pregnant snails climb over and lay their eggs.

You can try one such trap – a plastic Tupperware container. First, use a screwdriver to make small holes on top of it. Next, put a damp cloth or paper towel over the container.

Now, keep the clutches on it. This will keep the eggs above the water surface while keeping them moist.

Aside from maintaining normal tank temperature, you need not provide any further assistance. However, if heat lamps are installed, you should not let the clutches float near them. This can dry the eggs and make them infertile.

How Do You Know When Snail Eggs Are Ready To Hatch?

Newly laid eggs are white and transparent in color. For example, mystery snail eggs are light pink in the beginning. But after a week or two, some may start to turn dark from the inside. These dark patches show that the eggs are fertile and ready to hatch. And after the whole clutch turns dark, the eggs will hatch anytime soon.

However, you will notice that not all eggs hatch simultaneously. Some will hatch much sooner than the rest. Some eggs even turn out to be dud. Despite that, you will eventually have more than a handful of snails in your tank.

Do Snail Eggs Need To Be In Water To Hatch?

Most freshwater snails do not lay their eggs inside the water. They will need their clutches to be above water level but only partially. They stick their eggs just above the water level. This way, the eggs remain moist without getting completely wet.

How Many Eggs Do Snail Lay At A Time?

Snails do not lay all their eggs at a single time. Instead, they will lay them in batches within 7 to 10 days. Aquatic snails will lay about 200 to 300 eggs in a single set. As for terrestrial snails, species like garden snails lay about 80 to 100 eggs at a time.

If you keep only snails of the same sex in your tank, the eggs they lay may be unfertilized. However, some snail species have complex reproduction systems, allowing them to reproduce without needing the opposite sex.

Newborn mystery snails are no bigger than a pea. When measured, they are smaller than half an inch. And as they grow, they will become an inch long within two to three months.

In a commune tank, it will be hard for untrained eyes to detect these snails right after their birth. Beginners often mistake them for the substrate.

Like I said earlier, the answer to how long does it take for snail eggs to hatch depends on the type of species and the ambiance of the habitat.

Most aquarists only raise and breed a few popular snails. So, the reply to the query “how long does it take for snail eggs to hatch” is based on the few commonly raised breeds.