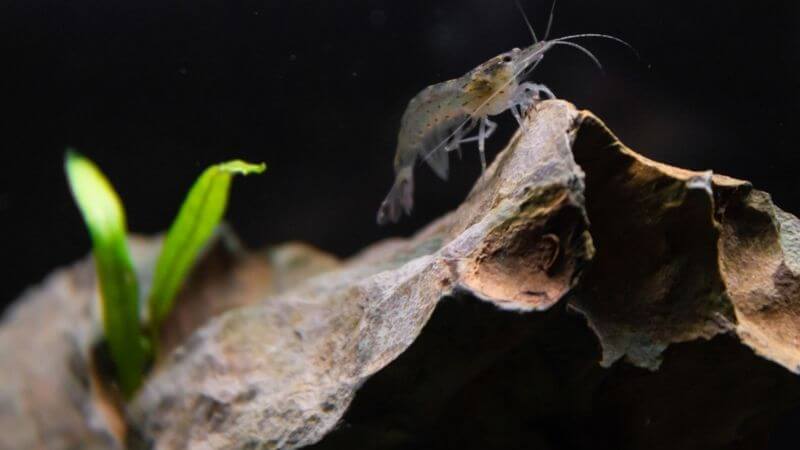 With the growing craze for shrimp, especially Amano shrimps, aquarists worldwide want Amano in their tank. This craze for having a shrimp in one’s tank is because of their relentless feeding of algae, which keeps the tank clean for other fishes. So the question arises, how many Amano shrimp per gallon?

Amano shrimp are quiet and peaceful, making a suitable tank mate for other aquatics. While your fish will swim in the tank, these Amano shrimps will dwell on the substrate and clean off the after-products of other beings in the tank.

However, Amano shrimps socialize only with their own kinds. They like to live in groups, also known as a troupe. Therefore, you need to know how many Amano shrimp per gallon your tank can accommodate. Let’s discuss further on this query.

How Many Amano Shrimp Per Gallon?

You might think that you already have several fishes in your tank, so the 3:1 ratio of gallon and no. of shrimp could be an exaggeration. But you need not worry because your shrimps will dwell most of their time at the bottom of the tank.

However, it is suggested that if you have a 20-gallon tank, then you can keep 5 Amano shrimp in it.

I would suggest that you have at least a 20-gallon tank to keep a troupe, considering 1 troupe of Amano comprises 5 Amano shrimps.

You might think that 5 Amano shrimps are quite a lot, then you need to consider that one cannot breed Amano in a tank. Amanos need brackish water along with various factors, so breeding them in a tank is nearly impossible (I am talking about pure Amano shrimp).

So unlike other types of shrimps, there’s no sign of Amano shrimp’s growth in population in a tank, which is why 5 Amano in a 20-gallon tank won’t be too much for you.

How Many Amano Shrimp Should You Keep?

5 Amano shrimp will be the right choice for aquarists who want to keep these beautiful translucent shrimps in a 20-gallon tank. As I said earlier, it is nearly impossible to breed your Amano shrimp in a household tank. This makes it even easier for you to manage without worrying that they reproduce and increase their population.

An adult Amano shrimp can grow up to 2 inches. And they need to feed on algae for growing. A 20-gallon tank can produce enough algae for your troupe to feed.

Yes, 2 gallons of water will be enough for an Amano shrimp, but surviving and thriving are two different things. Your 10-gallon tank won’t be able to produce enough algae for 5 Amano shrimp.

Amano shrimp are voracious eater and can feed on algae 24/7 with few breaks in between. So, consider getting 5 Amano shrimps for a 20-gallon tank.

Unlike other shrimps, they won’t head first for the feces or leftover of other aquatics. They will always go for the algae; that is why your tank should be able to produce an ample amount of algae for your troupe of Amano.

Challenges Of Over Population Of Amano Shrimp

First, it is a rare chance that you will have an overpopulation of Amano shrimp in your tank as they won’t be breeding in a captive tank. Unless you put too many Amano shrimps together in a tank, there’s no need to worry about the growing number of Amano in your tank.

But if you have kept more Amano shrimps than necessary in your tank, then here’s what could happen.

Amano shrimps will devour almost everything in your tank. And when they are in great numbers, then they will do it even fast. Once they finish feeding algae, they will go for the feces of their tank mates. And when that is cleared, they will eat their sheddings.

When there’s scarcity in the tank, you need to feed them algae pellets time and often, which I am sure won’t be cheap when you have to buy frequently. Also, allocate more time for their feeding and caring.

They can be food for other fishes.

Often these shrimps hide in their favorite hidings and get active during the nighttime. But if there’s overpopulation, they will come out of their hidings to feed even during the daytime. They will encroach other aquatics areas too. Some fishes are extremely territorial, and your Amano can be prey for them when they creep into their spaces.

Habitat can be Stressful.

Although the Amano shrimp are peaceful, when they are more than appropriate in number, they can crowd the aquarium. You will find your aquarium congested, and it will hamper every other inhabitant in your tank. Your fishes will be stressed and will lose their appetite and go into hiding.

Amano shrimps are peaceful creatures and will seldom get aggressive towards other aquatics. In fact, they don’t have god gifted organs in their body, which protects them from aggressors. The only thing they have is their hind legs, which helps them to walk backward fast. So you now know why they are peaceful and vulnerable to predator attacks.

Shrimps are the best tank mates that you can pair with your Amano shrimps. Cherry shrimp, bamboo shrimp, and vampire shrimp will be suitable tank mates for your Amano.

Snails are another fascinating group of aquatics that you can keep alongside your Amano. They, too, are peaceful and won’t do any harm to your shrimps. They are slow movers and will feed on algae, dead plants, and uneaten fish food remains. Their diet is similar to Amano, so the algae pellets you bought for Amano can also be fed to your snail and vice versa.

Fish can be territorial and can harm your Amano, so you need to be picky when choosing a tank mate for your shrimps. Guppies and Neon Tetras are the two best popular best fish tank mates for your shrimps. They dwell most of their time in the middle part of your tank and leave the bottom space for your Amano.

You need to protect your Amano shrimps from aggressive aquatics. You shouldn’t pair them with crayfish and freshwater lobsters, as they won’t hesitate to think of your Amano shrimp as food.

You shouldn’t keep your Amano shrimp with Bettas, Goldfish, Cichlids, Arowanas, or Oscars. These fishes are aggressive and territorial and will attack them when they feel encroached.

If you plan to keep your Amano today in the tank, then I advise you not to change water on the same day. Changing water will only cause stress to your newly kept shrimps. Make sure the water temperature is around 75 to 80 degrees Fahrenheit.

Like every other aquatics, Amano shrimp won’t tolerate ammonia. Also, keep the amount of nitrate and nitrite to a minimum. The pH level of water should be between 6.5 and 7.5.

An Amano shrimp requires brackish water for breeding, but you need to avoid salty water when transferring them to a new tank. A negligible amount of salt can be fatal to your adult Amano shrimp. However, if you have gotten larvae, then they can only grow in brackish water.

Have Plants in Your Tank

Amano shrimps need live plants to hide and feed. They will feed on these live plants’ dead leaves when there’s a shortage of algae in the tank. If there’s already tank mates in the preexisting tank, then these plants will help them to hide from them.

Switch off the lights

Make sure you turn off the lights when introducing your Amano shrimp in a new tank. Bright lights can cause stress to your shrimps and will cause them to hide in the plants. So make their habitat comfortable and habitable for their ease.

Final Words On How Many Amano Shrimp Per Gallon

Even though a 10-gallon tank is sufficient for a troupe of 5 Amano shrimps, you shouldn’t put your shrimp under such conditions. Surviving and thriving, as I said earlier, are two different things. Make sure the ratio of a gallon per shrimp is at least 3:1. That means you can keep 5 shrimps in a 20-gallon tank.