How Many Angelfish In A 29-Gallon Tank? Do They Shrink In Small Tank? 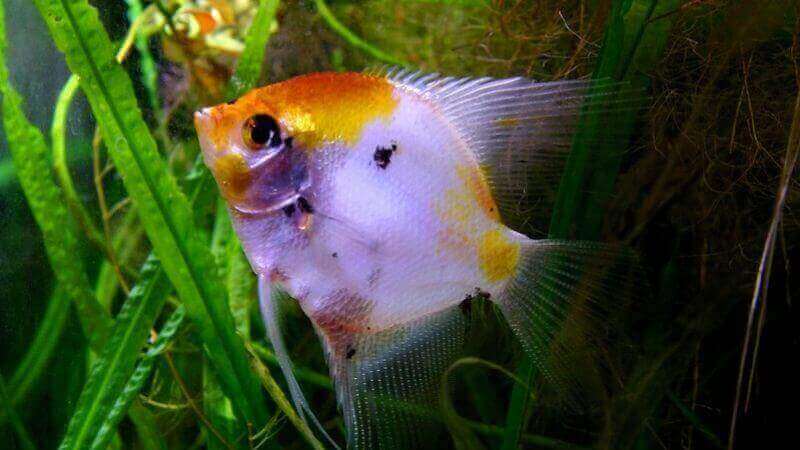 Angelfish are cichlids. And although they’re not as ferocious as their African cousins, they can be pretty mean. Their temperament, coupled with their tall stature, demands a big aquarium, to say the least. So, how many angelfish in a 29-gallon tank? Is it even possible?

How Many Angelfish In A 29-Gallon Aquarium?

You can keep exactly two angelfish in a 29–gallon aquarium. Anything more than that will spell trouble. These fish grow big (up to 6 inches) and tall. And as they get older, they become highly territorial. So, it’s best to only keep 2 angelfish (1 breeding pair) in a 29-gallon tank.

If you keep any more than 2 in a 29-gallon tank – let’s say 3 – 2 will pair up and bully the odd one out relentlessly. This can even lead to the death of the lone fish.

So, if you intend to keep more than 2, it may be possible while they’re juveniles. But as they grow, you have to be prepared to separate and relocate them.

Of course, if you buy the angelfish as babies, you will have a couple of months before territorial aggression becomes a concern. But still, it’s something to know about upfront.

Unfortunately, this rule has become ubiquitous in the hobby. One too many people throw it around as advice casually. But it’s dangerous on so many levels.

First, this rule doesn’t take the fish’s height into account. Now imagine not taking height into consideration for species as tall as angelfish.

Second, it also completely ignores the space taken by decors, plants, and substrates during calculation. Every single object you add to the tank takes away from the number of gallons your tank actually holds.

So, what could be the correct method? There’s got to be something, right? Thankfully, there is.

Let’s have a look!

How Many Angelfish In A 75-Gallon Tank? Use This Golden Rule!

How Many Angelfish In A 55-Gallon Tank? Use This Formula!

How Many Cichlids In A 75-Gallon Tank? Mbunas, Peacocks And South American

How Many Cichlids in a 55-Gallon Tank? Use This Simple Formula!

Easy Calculation To Find Out Stocking Number For Any Tank Size

In his book, You And Your Aquarium, veteran fishkeeper and acclaimed author, Dick Mills, has mentioned certain rules to follow while calculating the stocking number.

According to him, we should allocate at least 12 square inches of open tank surface to an inch of fish for tropical fish like angelfish, 30 inches for cold freshwater fish like goldfish, and 48 inches for tropical marine fish.

From what I know, this is actually the rule followed by many experienced hobbyists. Reportedly, considering the floor and surface area of the tank is integral in ascertaining the best stocking number.

Now, let’s look at the steps involved in this calculation.

To calculate the surface area, you first need to determine its length and width. Then, you need to multiply the two. We can disregard the height of the tank for this calculation.

Step 2: Calculate the total inches of fish the tank can hold.

To calculate the total inches of fish that the tank can hold, we need to divide the surface area by the number 12. That’s because, as per the rule, mid-sized tropical fish like angelfish need 12 square inches of space per inch of the fish.

Total inches of angelfish the tank can hold = Surface area/12

Step 3: Calculate the number of fish the tank can hold.

We will assume 12 inches to be the height of an adult angelfish for this calculation, which is true in most cases. So, we simply need to divide the answer from the above calculation by 12.

Here’s a simple calculation that will clarify things further.

Next, calculate the total inch of angelfish the tank can hold.

Finally, calculate the number of fish a tank can hold.

Now, 2.5 can be rounded off to either 2 or 3, I know. But any hobbyist with even the slightest idea would not stock 3 angelfish in a 29-gallon tank.

Why? Because eventually, 2 will pair up and gang up on the singleton.

The lonely fish will be mercilessly bullied by the power couple and be forced to retreat to a tiny corner in the tank if they’re feeling generous.

The most likely scenario is that the odd fish will be bullied to death.

Below, I have made some calculations and come up with a table that tells about stocking numbers for different tank sizes.

I hope it’s going to be helpful.

Oh, by the way, if the tank you have isn’t included in the list above, you can calculate using the dimensions given in this article.

I’ve covered all the tanks ranging from two and a half gallons to 225 gallons.

In my quest to provide you with fair, neutral, and inclusive answers, I’ve collected some quotes on the subject left by real hobbyists on different forums.

Skim through them for better understanding! 🙂

How Many Angelfish In A 29-Gallon Tank? This Is What Hobbyists Say!

Note: All the quotes mentioned below purely belong to the original authors

“My suggestions would be 2 in a 29-gallon tank. You could put 4-5 without overcrowding, but they will get extremely territorial as they grow and pair up. You will have constant fights on your hands with real damage being done to some of them.”

“I had two angelfish in my 29-gallon community tank. Had to remove and relocate them as they launched many attacks on my rainbow platies that resulted in the loss of 5 fish!”

“I kept a pair of angelfish for many years in a 29-gallon planted tank. They were a mated pair and repeatedly laid eggs on the filter tube and Amazon sword leaves. The bad news is that they were a trio. The couple ended up killing the third one before I could intervene.”

“My mated angelfish pair live happily in a 29-gallon tank.”

Tankmates For Angelfish In 29-Gallon Tank – Is It Possible?

I’d suggest simply adding a breeding pair of angelfish in a 29-gallon tank and nothing more. That’s because angelfish are super territorial – especially when they’re spawning – and will practically make life miserable for anybody else present in the tank.

Hear me out. It’s not possible to add another big fish to a 29-gallon angelfish tank. So, the only options you have are small fish or invertebrates.

And the thing with angelfish is that they’re ambush predators. So, they have a pretty sharp hunting instinct. Adding small creatures to a small, confined area with angelfish pretty much translates to throwing them under the bus.

But if you’re okay with your fish potentially being eaten or bullied to death, I could suggest a few species.

I have conjured the list by scouring through different forums. Also, don’t forget to take the following information with a pinch of salt.

Here are the names:

At around 9 months of age, angelfish reach the height of their sexual maturity and take on a very aggressive personality.

Therefore, if you are going to stock any other fish alongside angelfish, be prepared to separate and relocate them at any given moment.

Do Angelfish Grow To The Size Of Their Tank?

As a matter of fact, cold-blooded animals like fish can grow throughout their lives. And a confined environment can undoubtedly take a toll on their growth.

While most angelfish are strong and hardy enough to survive these conditions, their health and growth will suffer greatly – making them stunted.

Let me tell you how a small tank can inhibit a fish’s growth process.

Studies have shown that fish release certain pheromones in the water that will retard or even completely stop the growth of fish around them. Well, this wouldn’t be a problem in nature, as the water will get flushed or swept away in a jiffy.

However, in a tank, these pheromones have nowhere to go. So, inevitably, the fish will absorb these chemicals into their bodies. And this will compromise their growth quite profoundly.

A small tank means less room to exercise. And angelfish love to swim and dart around the tank. A lack of enough space to swim naturally means the fish won’t be able to stretch its muscles as much as it’d want to.

So, although it may sound far-fetched, a smaller tank will eventually stunt your fish’s growth.

Stress Has Negative Impact On Growth

Although a good part of the world’s population thinks of fish as nothing more than protein chunks swimming mindlessly in the ocean, they’re highly frail and emotional beings.

They can get stressed at even the slightest inconvenience. It could be an overcrowded tank, inappropriate diet, mean tankmates, or a bad environment.

And when stressed, the fish’s body automatically stirs up hormones – including the growth hormone – to get through the stress.

In nature, angelfish have the luxury to simply swim away from the stress-inducing factor. The hormones will then instantly reset.

However, in a fish tank, the fish will go on stressing until you take notice.

So, as a result, this fluctuation in hormones will lead to consequences like lower metabolism, weakened immunity, appetite loss, and so on. And all these factors can single-handedly or collectively inhibit your fish’s growth.

I’m not saying that a tetra kept in a 1000-gallon tank will grow to the size of a grouper. But as it turns out, the size of the tank plays quite a vital role in determining your angelfish’s maximum potential size.

Final Words: How Many Angelfish In A 29-Gallon Aquarium?

I would suggest you add only 2 angelfish in a 29-gallon aquarium. When they’re juveniles, you can get away with adding 3-4, or even 5.

But be prepared to separate and relocate them within a few months. These American cichlids grow pretty big as adults. On top of that, they’re as territorial as they come.

Once the pair is formed, they will gang up and bully the lone fish callously. It could even result in death.

I’d also not suggest adding another creature in a 29-gallon tank with angelfish. The fish will lead an impoverished life. It wouldn’t be simply worth it.

And lastly, as you read above, the size of the tank does matter in ensuring the best growth rate and health of your fish. Therefore, move them to a bigger tank whenever possible!

How Fast Do Angelfish Grow? Real Answers By Real People!

Can Glofish Tetras Live With Angelfish? It Can Be Risky!