How Many Gallons Does A Clownfish Need? Answers For All Species! 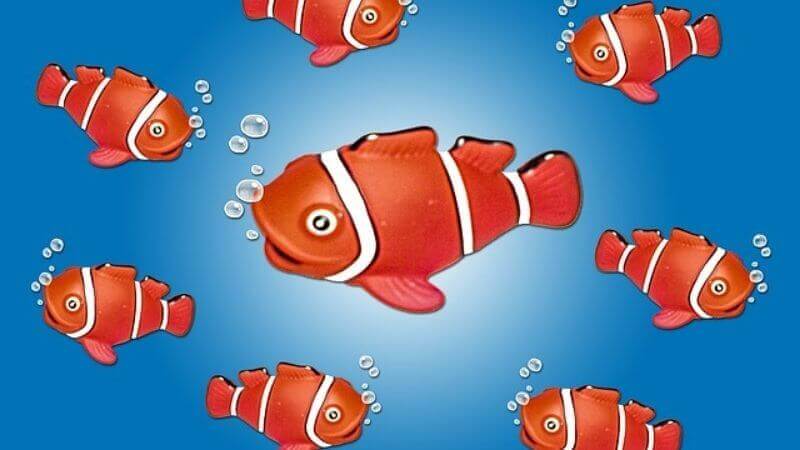 Clownfish burst into stardom overnight when Finding Nemo was first released in 2003. They instantly became the poster child of marine fishkeeping hobby to the extent that their population almost dwindled in the wild.

To this day, millions of clownfish, used to vast oceans and colorful reefs, are overnight subjected to a lifetime of captivity in our tanks.

We can never ever emulate the environment of their natural habitat to even the littlest extent. However, as responsible fishkeepers, we can at least ensure they have ample space to swim around and claim.

That’s some food for thought. And it takes us to the query of the day:

How Many Gallons Does A Clownfish Need?

Next, you should allocate an extra 10-15 gallons for each additional clownfish.

So, there you go. That’s one comprehensive table. It covers the tank size requirement for almost all commonly available and designer clownfish species.

Now let’s move on to the next query.

Clownfish don’t necessarily need to have an anemone present in a captive setting, although they’d benefit from having one. If you want to house an anemone and clownfish together, you’d at least need a 50-gallon tank.

And if you’re a beginner, I’d advise against raising anemone in the first place.

While clownfish are relatively low-maintenance as long as you get the water parameters right, anemones demand a higher degree of time, care, and expenses.

I have a pair of clownfish, bubble tip anemone, and hermit crab in a 75-gallon tank.

Whenever I disperse food into the tank, my clownfish make a point to grab some and offer it to their host anemone.

However, the crab often snatches it away. When this happens, I make sure to offer some more food to the fish, who then again diligently provide it to their host.

All in all, it’s fantastic to watch their antics. I can watch the clowns mingling with the anemone for hours and hours.

Once you have gained enough experience and find it super easy to raise clownfish, the next step naturally will be to get an anemone for your lovely fish!

How Do Clownfish Sleep? Upside Down?

Why Are Small Tanks Bad For Your Clownfish?

I can go on and on about how small tanks are detrimental to your fish’s overall wellbeing. From stressing the fish acutely to stunting their growth and even causing death, a small tank comes with one too many vices.

Let’s quickly have a look at the reasons why small tanks are harmful.

Small tanks mean small water volume. And smaller the water volume, the more easily polluted it gets. The parameters are prone to sudden changes and become toxic more easily. Small tanks are a lot more temperamental than their bigger counterparts.

Especially if you’re a beginner, you might find it incredibly challenging to maintain stable and healthy water parameters. A small change in one corner can be felt throughout the tank in no time.

Also, as it goes without saying, small tanks are more exposed to chances of spikes in ammonia, nitrite, and nitrate levels.

Your Clownfish Will Be Prone To Stress And Disease

I think this pointer is self-explanatory if you have read the above paragraph. When the water becomes toxic – and even worse, suddenly – it will only lead to negative consequences.

On top of that, all clownfish are territorial by nature, although the degree may differ. So they will naturally run into territorial feuds in a small tank, which will only add to the stress.

And when stressed, like all fish, your clownfish will produce excess stress hormones, which will result in suppressed appetite and lowered immunity.

As a result, your fish now becomes susceptible to a plethora of secondary conditions.

Your Clownfish’s Growth May Be Stunted

If you have an anemone alongside clownfish, the fish will stick close to its host and seldom stray. However, in the absence of anemones, clownfish make pretty active swimmers.

But small tanks can stunt their growth in two ways. First, the fish won’t have enough room to swim freely. A lack of exercise means your fish is exposed to contracting conditions like muscle atrophy.

Second, fish are known to secrete specific pheromones into the water, inhibiting the growth of other fish in the tank. These chemicals can get diluted easily in a big tank, whereas they’ll get absorbed into the fish’s body in a small tank, resulting in stunted growth.

Before we end this article, let me answer some of the most frequently asked questions at Urban Fishkeeping.

How Big Of A Tank Does A Clownfish Need?

As evident from the table above, you now know that there’s no one definitive answer to this question. Ranging on the clownfish’s size and temperament, they can require anywhere from 20 to 70 gallons per fish.

Can A Clownfish Live In A 5-Gallon Tank?

No, a clownfish cannot and shouldn’t live in a 5-gallon tank. Although these fish don’t grow too big, they’re pretty active and demand ample space to swim around freely. Therefore, your fish will suffer in a 5-gallon tank – even more so if it’s a wild-caught specimen.

And let me tell you, there’s every chance that the clownfish you brought home was caught in the wild, as figures show that millions of clownfish are sourced from the wild every year.

How Many Clownfish Can I Put In A 10-Gallon Tank?

Unfortunately, a 10-gallon tank is not big enough to house clownfish. You’d at least need extra 10 gallons. Since 20 gallons is the bare minimum requirement for clownfish, the answer to this question is 0.

Getting a bigger tank means your fish will be happy, and you’ll be a lot less worried about maintaining the correct water parameters.

How Many Clownfish In A 20-Gallon Tank?

Throughout the article, we have maintained our stance that you should at least provide 20 gallons of tank space to your clownfish. Therefore, the answer to this question is 1.

And that takes us to our next question.

In the wild, clownfish live in small groups. However, in the tank, they can perfectly live alone with the entire tank to themselves. Clownfish don’t necessarily get lonely or sad when kept alone.

That being said, the general practice in the hobby is to keep at least a pair. And you know how pair formation and its consequences play out with these fish.

How Many Clownfish In A 30-Gallon Tank?

Therefore, there is absolutely no possibility that you can keep a harem or multiple pairs in a 30-gallon tank.

How Big Can Clownfish Get?

On average, clownfish grow 4.3 inches (11cm) long. However, certain species like maroon clownfish can grow up to 6 inches long. Therefore, for these fish, 30 gallons is the bare minimum requirement.

How Long Do Clownfish Live?

In captivity, clownfish live for anywhere between 3 to 10 years.

However, if you ensure the proper care and diet at all times, it’s not uncommon for the fish to reach its 20th birthday milestone, as many hobbyists have reported on different forums.

Final Words: How Many Gallons Does A Clownfish Need?

There’s no one definitive answer to this question. That’s because there are over 30 different species of them. And they vary a great deal in size and temperament – two factors that determine how many gallons a clownfish needs.

While smaller varieties like percula and ocellaris clownfish can be kept in a 20 or 30-gallon tank, others like blue-striped and Mccullochi clownfish require at least 70 gallons for a single fish.

We hope the table shared above comes in handy for quick reference!