How Many Glofish In A 20-Gallon Tank? Honest Answers! 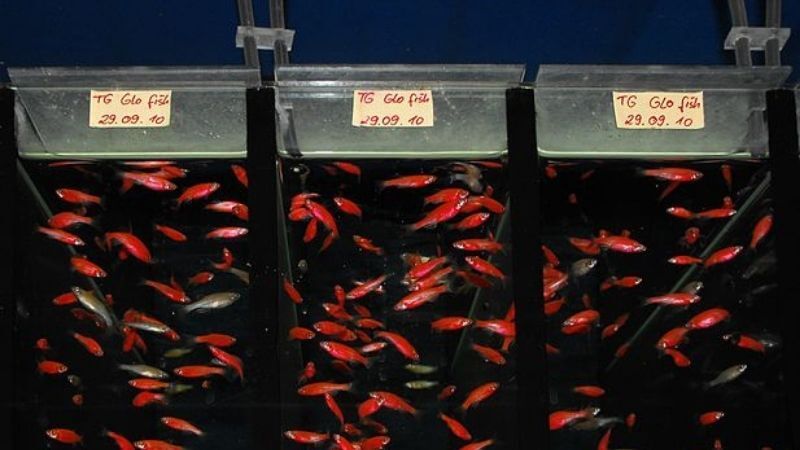 On the official glofish website, the biggest capacity tank available for glofish is 20 gallons. So, beginners often end up thinking these fish don’t really need a big tank. But do you know a single glofish shark needs 50 gallons? Don’t get disheartened – there are a few smaller glofish species that can live happily in a 20-gallon tank. Let’s get to the point – how many glofish in a 20-gallon tank?

How Many Glofish In A 20-Gallon Tank?

Now, let’s look at the answers in depth.

How Many Glofish Tetras In A 20-Gallon Tank?

Glofish tetras are genetically modified black skirt tetras. So, they grow quite big compared to other tetra species like serpaes and black phantoms. A glofish tetra’s average size would be 2.5 inches.

If we follow the ‘one inch per gallon’ rule, you can add exactly 8 glofish tetras in a 20-gallon tank. And although this rule is not always accurate, it’s pretty spot-on for this one, in my opinion.

8 is a safe number, especially if you are a beginner. If you’re not too sure about the stocking number, it’s always best to understock rather than overstock. 8 is also a good starting point for your glofish tetras to form schools.

In my effort to present you with well-rounded information, I have collected some answers from different forums on the subject.

“If you are only adding glofish tetras, I would say you can safely add at least 10.”

“My son has a 20-gallon long with 9 glofish tetras, 1 snail, and a couple of ghost shrimps.”

“I have 6 in my tank, and it goes pretty well. Just make sure to keep up on water changes, and you should be fine.”

“I’ve been in the fishkeeping hobby for more than 30 years. If they are the only fish you’ll be keeping, 8 is the max number.”

The stocking number also depends on whether you have a long or tall tank.

If you have a tall tank, you should probably understock the tank as it has a smaller footprint.

Tetras are highly active fish, and they would surely thrive the best in a 20-gallon long tank.

How Many Glofish Danios In A 20-Gallon Tank?

Glofish danios were the first-ever glofish – created by inserting jellyfish’s fluorescent jeans into the eggs of zebra danios. So, they grow just as big as their original species, around 2 inches long.

You can add 10-12 glofish danios in a 20-gallon tank if you have some experience with these fish. If not, I’d suggest understocking first and adding new fish later once you feel confident.

Once again, the tank’s dimensions play a pivotal role in determining the stocking number. For example, a 20-gallon long tank would hold more glofish danios than a 20-gallon tall tank.

Glofish danios need a long tank to do their laps in. They also like to ‘chase’ each other.

Here’s what real hobbyists have to say.

“My experience with glofish danios have led me to believe that a 20-gallon long tank is an absolute minimum. I can’t imagine them having enough space in anything smaller than that.”

“Danios would like much more swimming room than a 10-gallon tank. A 20-gallon tank would be a good starting point.”

“I have danios in a 20-gallon tank. They do zip all over the place.”

How Long Can Glofish Go Without Food? Which Species Can Go The Longest?

How Big Do Glofish Get? What Tank Size Do They Need?

How Many Glofish Barbs In A 20-Gallon Tank?

Glofish barbs are genetically modified descendants of tiger barbs. So, they’ve naturally inherited tiger barb’s size and aggression. These fish grow around 3 inches long and can be pretty feisty when kept in smaller groups.

You can keep about 5-6 glofish barbs in a 20-gallon tank.

However, since they are prolific swimmers with a knack for territorial aggression, I would recommend getting a 30-gallon tank if possible.

From what I have read, they should at least be kept in a group of 8 to curb their fin-nipping behavior and aggression. And a 20-gallon tank doesn’t have enough room for that.

Once again, if you have a 20-gallon tall tank, the stocking number should be low as it simply doesn’t have enough footprint to accommodate their active swimming sessions.

Have a look at what hobbyists have to say on this:

“Would never put tiger barbs in a 10-gallon tank. It’s just too small for them. I’d at least recommend getting a 20-gallon long tank.”

“They’re known fin-nippers. So they need a 30-gallon or larger tank.”

“I moved my tiger barbs out of a 20-gallon high tank to a 30-gallon as there was simply not enough space. Tiger barbs are so active and need to be in a group – so they really need a big room.”

“I really think a 29-gallon tank is the minimum tank size for them due to their activity level and need for a large school.”

How Many Glofish Bettas In A 20-Gallon Tank?

Bettas are the poster child for fish suited for tanks as small as 1.5 gallons. But I beg to differ. Glofish bettas grow around 2.5 to 3 inches long. And although the rule of thumb is 2.5 gallons for each betta, 5 gallons would be much better.

So, you can add around 4-6 female bettas in a 20-gallon tank. As for male bettas, it’s only possible to keep multiple males if you use a tank divider. Otherwise, no matter how big your tank is or how many hiding spots you add, you’ll end up with dead bettas sooner or later.

Look at what hobbyists have to say on the matter:

“5 female bettas in a 20-galloon tank would be fine. I think there would be enough room for everyone as long as it’s a long tank and not a tall one. Also, before you add them, make sure there’s plenty of hiding spaces and caves.”

“I personally would never keep 2 male bettas together no matter how big the aquarium is. It’s just asking for trouble.”

“With female bettas, as per my understanding, it’s best to get at least 4 and add them all at the same time.”

“Personally, I would keep a male and a few females in a 20-gallon tank. Any more than one male would result in ripped fins.”

“I have groups of 5 females in 3 of my 20-gallon tanks. No problems at all in any of them. I buy them from the same source, the same holding tank, and at the same time.”

“A sorority of female bettas with good hiding places can keep around 5 in 20 gallons.”

How Many Glofish Sharks In A 20-Gallon Tank?

Glofish sharks are created by adding fluorescent genes into rainbow sharks. So, just like their all-natural cousins, glofish sharks can grow 6 inches long.

With the one inch per gallon rule, you could fit 3-4 glofish sharks in a 20-gallon tank. But this rule doesn’t apply here.

A single glofish shark needs around 50 gallons to live comfortably. These are highly active and aggressive fish. If they don’t have enough room to swim in, they’ll downright resort to violence.

If you want to add any more than 1, you should at least get a 125-gallon tank or larger.

But as a matter of fact, it’s strongly recommended that you keep just one glofish shark in an aquarium at any time. That’s because these fish simply do not tolerate living with their own kind.

Glofish sharks prefer leading a solitary lifestyle. But if you insist on keeping more than 1, you should at least keep them in a group of 5. This will help spread the aggression, as the dominant fish will have more fish to chase after.

Have a look at what hobbyists have to say on keeping glofish sharks in a 20-gallon tank:

“Rainbow sharks will get too big for a 20-gallon tank.”

“I would skip glofish sharks for a 20-gallon tank. They don’t have the best personalities – they can be very aggressive.”

“Just skip the shark unless you have a bigger tank. The rainbow shark does pretty well in my bigger tank and is relatively docile.”

How Many Glofish In A 10-Gallon Tank?

How Many Glofish In A 30-Gallon Tank?

You can add around 12-15 glofish tetras, 14-15 glofish danios, 4-5 female glofish bettas, and 9-10 glofish barbs in a 30-gallon tank. However, 30 gallons would still not be enough for glofish sharks that need 50 gallons each.

How Many Glofish In A 40-Gallon Tank?

You can keep around 18-20 glofish tetras, 20 glofish danios, 8 female glofish bettas, and 12-13 glofish barbs in a 40-gallon tank. Once again, 40 gallons is not enough for extremely territorial and active glofish sharks. They require at least 50 gallons each.

It depends on the glofish species. Glofish tetras, barbs, and danios are schooling fish. They would become lonely and stressed and eventually stop eating when kept alone. It can even lead to their death.

On the other hand, glofish species like bettas and rainbow sharks can be kept alone. In fact, they’d appreciate it as they have an affinity for a solitary life. And it’s highly recommended to keep glofish sharks alone.

The minimum recommended tank size for different glofish species looks like this:

Technically speaking, glofish tetras can be kept in tanks smaller than 15 gallons – 10 gallons, 5 gallons, or even 3 gallons.

However, they’re schooling fish and should at least be kept in a group of 6 or more. Otherwise, they will get stressed and aggressive. They’ll even resort to nipping fins. And to raise around 6 of them comfortably, you would at least need a 15-gallon tank.

Speaking of schooling fish, glofish danios should also be raised in a group of 5-6.

Otherwise, they too will get stressed and aggressive. And although a 10-gallon tank would be the bare minimum requirement, I would suggest getting a larger tank – preferably 20-gallon long – as these fish are known to pace and dart around the tank like a flash.

Glofish barbs are the third and last schooling glofish species. And even though the minimum recommended tank size for these fish is listed to be 20 gallons, it’d be best to keep them in at least a 30-gallon tank.

That’s because glofish barbs are prolific swimmers and need plenty of space for swimming.

Second, they will become stressed and consequently violent if the tank is cramped.

And lastly, as I said above, these are schooling fish that find safety in numbers. And to safely house a group of glofish barbs, 30 gallons or larger would be ideal.

As for glofish sharks, they need the bare minimum of 50 gallons for a single fish. That being said, no matter how big the tank is, it’s still a bad idea to keep multiple rainbow sharks together as these fish are super intolerant of their own species.

It could very well lead to blood baths.

But if you still insist on keeping quite a few of them together, I’d recommend adding at least 5-6. This will help spread out the aggression the dominant fish would inevitably lash out on timid fish.

Final Words: How Many Glofish In A 20-Gallon Tank?

The largest tank capacity tank made for glofish is 10 gallons. But by now, you clearly know that these fish need a tank bigger than that owing to their unique needs.

Unfortunately, you cannot keep glofish sharks in a 20-gallon tank. Although these fish only grow around 6 inches long, they at least need 50 gallons each to live comfortably. And even when you guarantee 50 gallons for each individual, there’s a good probability that they’ll fight and fight some more until there’s only one standing tall.

How Many Glofish In A 10-Gallon Tank? Zero?

How Long Do Glofish Live? Which Glofish Species Lives Longest?

What Do Glofish Eggs Look Like? Photos And Videos!

How Many Glofish In A 3-Gallon Tank? Zero!