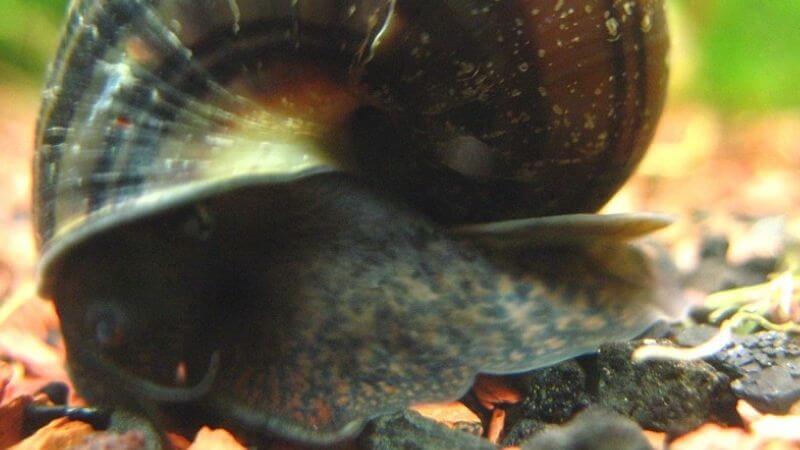 One is a snail, ten is a crab. Although the rhyme composer Sayre made it a faux pas, the truth is snails do not have legs at all.

Scientists classify snails as gastropods. It literally means stomach for legs in Greek. Snails use their abdomen for movement.

But how do they do it on a jaggy surface? Or when they have to crawl through spikes?

How Many Legs Does A Snail Have?

Snails do not have legs. Instead, they have a highly muscular organ known as the foot or sole, where abundant muscle fibers run in all directions. The contraction and expansion of these fibers help them crawl and cover the distance.

A snail’s foot is a bloated, tongue-like organ used for crawling. Foot also helps them propel their body underground to bury themselves.

Once the foot is pushed down into the substrate, the muscle inside the foot balloons and serves as an anchor.

Then it pulls the rest of the body down, and the snail stays buried.

In addition to the muscle fibers in their foot, snails have mighty muscles attached to their shells – columellar muscle.

These muscles move in a spiral fashion and help retract a snail’s body inside its shell.

How Does A Snail Walk?

Call it walking or crawling, snails use the muscles in their foot to contract and expand, making a wave-like movement, which helps them move forward.

And as they move, they will leave behind proverbial slime, which they excrete from the front end of their foot. Snails excrete huge amounts of mucus on which they crawl. It makes their travel effortless (even on a knife’s edge).

Their unique locomoting abilities have been an inspiration for today’s robotic community in developing friction-driven robots, mimicking the snail-like motion.

Do Snails Slide Or Walk?

Although the organ snails used for moving is christened as a foot, its function is to contract and expand, basically sliding.

Why Do Snails Leave Slimy Trails?

The leading utility of slime is to ease a snail’s movement, which it does by reducing friction with the surface.

Apart from the primary purpose of rubbing their body on a mucus-laden trail to reduce friction, there are other reasons behind snails leaving slime wherever they go.

Did you know that snails can communicate with their buddies through the slime trails they leave behind? Talk about reading hieroglyphics.

Snails can also remember their previously taken path by retracing the slimy trails.

After a filling feast, snails return to their abode, relying on the same slimy boulevard. This incredible ability could be the inspiration behind Hansel and Gretel.

And some predator snails are well-versed even in their prey’s itinerary. They are literate enough to make sense of the trail left by the prey snail. So these killers will track the snails down and binge on them.

Some Snails Drop Slimes In A Dotted Format. But Why?

It is an educated guess, but these dotted slime trails could be the predator-avoidance mechanism opted by snails.

Or, the snail is just saving the mucus reserve through limited usage.

I doubt any human will try tasting snail slime. But they are undeniably harmful as they are full of viruses and bacteria. Moreover, snails are one of the leading carriers of disease-causing agents.

What Are Snail Slimes Made of?

About 90% of the content is water, and the rest 10% is glycoprotein polymers. It is similar to mucus or saliva that humans secrete. Snails use it for lubrication, adhesion, and prevention from pathogenic attacks.

Snails also use slime to repair cracked shells. They will dispatch huge amounts of slime over the site and create a membranous seal known as the epiphragm. This coating prevents immediate harm from pathogens and infections.

It is absurd to think animals without legs jump, but there is this peculiar breed of snail that can perform this feat. No wonder this particular species is aptly monikered the jumping snails.

Jumping snails can leap up to 1-2 inches when they sense predators lurking or if the water temperature isn’t suitable for their needs.

Their foot powers the muscles to take off. However, they burn five times more oxygen than usual.

Here’s a clip of a jumping snail:

We often see snails floating and feeding on algae. It might appear as if they are swimming, but they are actually just passive floaters.

However, some marine species, like the sea hare snails, have fin-like growth on their foot, helping them create a swimming motion.

It might be fair to say that sea hares have discarded the heavy shell for better mobility.

Despite not having a shell to retreat in when there’s danger, they release ink – similar to the way cephalopods like octopuses do.

After releasing the ink, these snails will use fin-like appendages to swim away from the danger.

How Fast Can Snails Move?

Snails can still cover a significant distance despite using up more than 40% of their energy in slime formation. For instance, a garden snail can cover about 0.03 miles per hour.

Did you know that a snail named Archie holds the record for the fastest snail in the Guinness Gastropod Championship?

This pronoun-less snail covered a course of 13 inches in 2 minutes and 20 seconds. You do the math.

Final Words: How Many Legs Does A Snail Have?

It is a misnomer for snails to have an organ named foot as they don’t have legs. But this foot does serve the purpose like legs in other creatures.

Not only does it help in a snail’s movement, but it also secretes slime to communicate and slipstream. Yes, that’s a word. Slipstreaming is how snails travel by moving along the slimy trails left by fellow companions, helping them conserve energy.