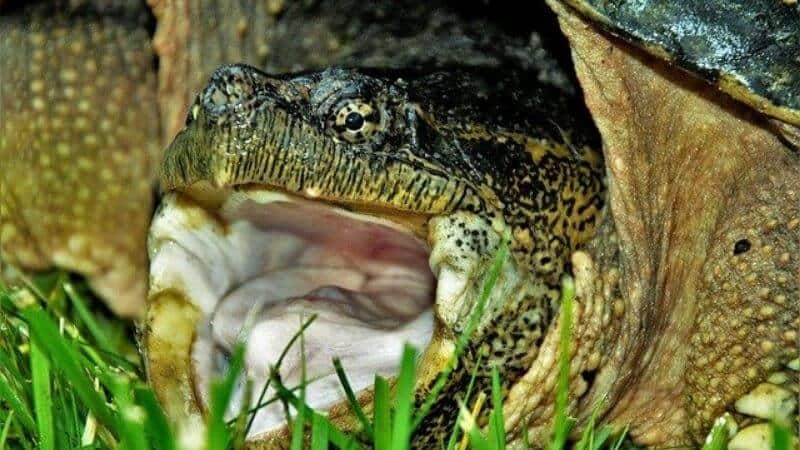 Have you ever been bitten by a turtle? Well, I have. It was a red-eared slider turtle. And although it didn’t hurt, it definitely startled me. But, had I been bit by a snapping turtle, would I still be typing this article?

This made me examine my red-eared slider’s mouth with a magnifying glass. In this article, I will tell you my findings on how many teeth do turtles have. Buckle up!

How Many Teeth Do Turtles Have?

Do Turtles Have Teeth?

No, turtles do not have teeth. Instead, most of them have beaks with sharp ridges inside them, which they use to kill their prey. Vegetarian turtles have flat beaks, whereas carnivores have sharp and hooked beaks. They also have tongues that help them swallow their food.

Why Do Turtles Not Have Teeth?

Millions of years ago, turtles used to have teeth. As new food sources were discovered – like hard-shelled mussels and crabs – their teeth evolved into beaks to break and pick food. The practicality of the beak outweighed that of normal dentition such as molars, incisors, and fangs. So, turtles became reptiles with no teeth.

Do Baby Turtles Have Teeth?

Yes, baby turtles have a single tooth only. They use this temporary tooth to scratch and crack the eggshell in which they resided for months. This single tooth is known as a caruncle. It is located in the upper jaw.

The caruncle will fall off a couple of days after they are born. Then, the baby turtles will use their jaws and tongue to swallow food, just like the adults.

So, How Do Turtles Chew Their Food?

Despite lacking teeth, turtles still have powerful jaws – both upper and lower. Their jaws are powerful and can exert hundreds of pounds of pressure. This helps them gnaw flesh, vegetation, and other aquatic plants.

Carnivore turtles have beaks which they use to tear off the flesh of amphibians and fish. Then, after they bite off the chunks of food, they use their tongue to push the food to the rear end of the mouth and swallow.

The soft-shelled aquatic turtles do not have sharp beaks, but they still eat a meat-based diet. So how do they do it? These turtles only choose prey they can fit inside their mouth. They will then swallow their food whole using their muscular tongue.

Anatomy Of A Turtle’s Mouth

Turtles do not have teeth. Instead, some have sharp beaks, and some have soft lips. Turtles with sharp beaks tear off their food – just like the birds.

Snapping turtle’s bite force is strong enough to amputate a human’s finger. In addition, their sharp beak helps them to efficiently hunt and tear down their prey’s flesh.

On the other hand, unlike carnivore turtles, herbivore turtles have lips. They only eat what they can swallow. They use their tongue to roll down the food and swallow.

These spiky barbs inside their mouth are known as papillae. These papillae are made up of keratin, the same element that makes up nails and hairs. These spikes protect the sea turtle’s throat from jellyfish stings and also help in trapping food. In addition, papillae help in breaking down food.

Like most reptiles, turtles carry salmonella bacteria which can cause infection. So, make sure to disinfect your hand right away if you ever get bitten.

If your hand is already infected due to the bite, you need to see a doctor. Most medical practitioners usually provide prescriptions for antibiotics.

How To Treat A Turtle Bite?

Though turtle bites aren’t dangerous in most cases, since their mouths carry salmonella bacteria, it can cause infection in the bitten area. So, here’s how you treat a turtle bite:

First, Disinfect The Hands Of The Person Treating The Wound.

Clean, sanitized hands reduce the risk of infection and its transmission. So, the person treating the wound should thoroughly wash their hands first.

If you are bleeding, you need to make it stop immediately. Use a clean cloth and apply gentle pressure on the wound. If the bleeding doesn’t clot within 10 minutes, you need to seek immediate professional help.

Once the bleeding stops, take a bottle of saline water and pour it over gauze pads. Squeeze the gauze until no water drips from it. Gently clean the outer region and place the gauze in the wound.

Pour betadine solution over the gauze and press it gently over the wound. Betadine contains povidone-iodine (PVP-I), which helps to prevent infection caused by the bite. In addition, these solutions do not have alcohol content in them – thus, featuring no-sting promise. You will feel mild pain immediately, but it also means that the betadine is working effectively over the wound.

After treating with betadine solution, cover the wound with a clean sterilized dressing. These are readily available in every drugstore. Tighten the dressing so that it doesn’t fall off. Also, make sure the tightened dressing doesn’t inhibit blood circulation.

The whole point of dressing wounds is to prevent infection. So, you need to change the dressing regularly, if possible daily. Then, repeat the steps mentioned above till you notice the wound starts healing.

Do Red-Eared Slider Turtles Have Teeth?

No, like all turtles, red-eared slider turtles do not have teeth. Instead, they have soft-lipped mouths with jagged-edged jaws to tear food. Inside their mouth, they have muscular tongues to push down their food in a single gulp.

As juvenile turtles, they are voracious and will mostly depend on a carnivorous diet. However, adults tend to prefer an herbivore diet – thus, they have soft-lipped mouths instead of beaks.

Do Snapping Turtles Have Teeth?

Despite having ‘snapping’ in their name, ironically, snapping turtles do not have teeth. Instead, they have powerful jaws that can even amputate a human’s finger.

Unlike other freshwater turtles, they have pointed bird-like beaks – which help them tear off food, especially amphibians and crustaceans.

One peculiar thing about snapping turtles is that they use their tongue to lure their prey. They wiggle their tongue and replicate a worm’s movement to entice nearby fish. And when the fish falls for the bait, the snapping turtle will shut its powerful jaws to crush its prey.

Their jaws are mighty enough to prey upon birds too. There are several clips of snapping turtles preying on birds.

So, if you are a snapping turtle owner, you need to be careful while feeding your turtles.

Do Sea Turtles Have Teeth?

No, sea turtles do not have teeth. Instead, they have papillae, a keratinized spiky projection that helps them trap and break down food. These papillae also protect their mouth from jellyfish stings.

Sea turtles intake volumes of saltwater while swallowing their prey, so they need to throw out the excess saltwater. So again, these papillae come in handy to expel surplus saltwater and prevent dehydration.

Do Box Turtles Have Teeth?

Final Words On How Many Teeth Do Turtles Have

Scientists have discovered that prehistoric turtles used to have complete sets of teeth like mammals. But the modern-day turtles have evolved into a being with no teeth. Instead, the meat-eating turtles have beak-shaped mouths like the birds, which they use to tear their prey’s flesh. And the herbivores have soft-lipped mouths to graze on plants and vegetation.

Although turtles do not have teeth, their bite is powerful and can cause significant harm to humans. So, you need to be extra careful while carrying or feeding your turtle. Make sure you carry them from the tail region of their shell.

Snapping turtles can be more aggressive than other types of turtles. Their jaw force is also strong enough to cause accidents. They can jump too! So, be extra careful when handling a snapping turtle.