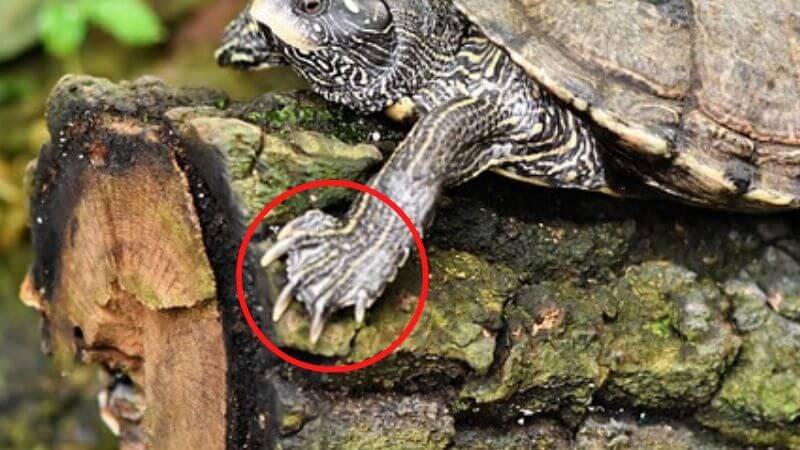 Last week, my curious nature somehow motivated me to check my turtle’s limbs. I found that my red-eared slider has five toes. So, I wondered if all turtles have 5 toes.

So, how many toes do turtles have?

How Many Toes Do Turtles Have?

Different species of turtles have different numbers of toes. Most turtles have 5 toes, whereas some species like the three-toed box turtle have 3 (occasionally 4, too).

In this anatomy lesson, we will not discuss the whole body. Instead, we will only look at the anatomy of their legs.

Some amphibian turtles, like box turtles, have limbs similar to those of tortoises, with one exception. Box turtles have webbed feet and long claws.

The inclusion of webbed feet helps them fare better in water, and the claws (toes) help scrabble up to the floating logs, where they like to bask.

Male turtles also use their powerful claws to clasp the female’s shell during mating. Then, they use it to stimulate the female turtles.

Do Raccoons Eat Turtles? 6 Ways To Protect Your Turtles

Sea turtles have flippers instead of toes. But this doesn’t mean that they do not have metacarpals or metatarsals beneath the skin.

Although not visible, sea turtles have metacarpal bones inside the flippers, similar to ours.

The metacarpals on the front flippers tend to be much longer than those in the hind.

Sea turtles use the front two flippers to generate the thrust required for propelling, whereas the hind flippers are used for adjusting their course. Their limbs, as flippers, alone help them swim six times faster than freshwater turtles.

Although these flippers have a considerable advantage at sea, they aren’t of much use when a sea turtle braces land.

If you spot one on land, notice how they drag their body unhurriedly.

Unlike terrestrial turtles, freshwater turtles have longer toes with webbing. This is an evolutionary trait present in most amphibians that helps them move quickly in the water to chase food or escape when predators are around.

Like the snapping turtles, some freshwater turtles walk on the bottom of the pond and rivers in search of food.

Their long claws help them perform this hustle and bustle.

How Many Claws Do Turtles Have?

How Many Toes Do Three-toed Box Turtles Have?

Three-toed box turtles have five toes in their front legs and three or four toes in their hind legs. However, some have speculated that turtles with 4 toes are actually eastern box turtles.

How Many Toes Do Snapping Turtles Have?

Snapping turtles have 5 toes in each leg. In addition, they have webbed feet and long claws, which help them walk on the bottom of the water body.

Do Turtles Have Fingers And Toes?

Not all turtles have fingers and toes. For example, most freshwater turtles have webbed feet with sharp claws at the ends, giving them a finger-like appearance. On the contrary, sea turtles have flippers similar to the seal’s.

Final Words On How Many Toes Do Turtles Have

A large cluster of various species falls under the turtle family. Therefore, different species of turtles have a unique set of peculiarities.

In contrast to freshwater turtles, sea turtles do not have toes. They have flippers instead.

However, most freshwater turtles have five toes, which play a significant role in mating or climbing up a basking platform.