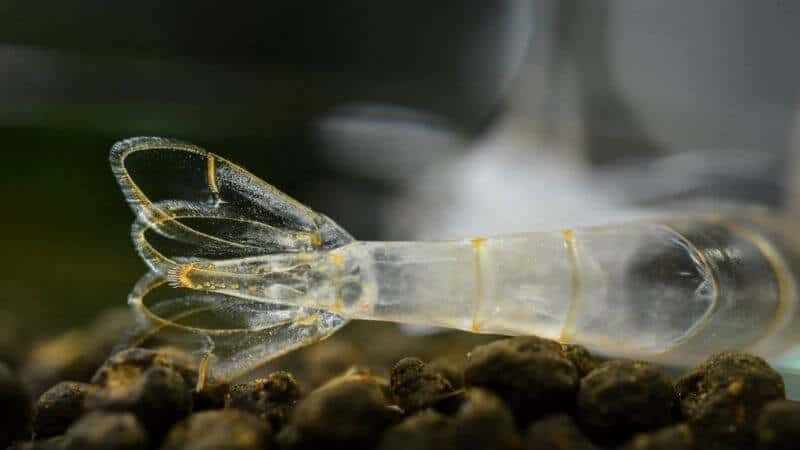 Amano Shrimps is one of the popular breeds of shrimps first discovered in Japan by Takashi Amano. Amano shrimp, aka Caridina Multidentata, falls under arthropods, which need to molt to grow. The molting process and growing process go hand in hand with Amano shrimps too. This is why we will discuss how often do Amano shrimp molt.

How Often Do Amano Shrimp Molt?

Baby Amano shrimp will molt once every week. If the fry is getting enough diet, then their healthy growth requires frequent molting. Molting is pretty common in baby Amano shrimp.

Why Isn’t My Amano Shrimp Molting?

A shrimp not molting is unusual, and there could be several reasons behind it. Factors like poor water quality, insufficient diets, and age factors are some of the reasons why your Amano shrimp is delaying or not molting.

Here I have briefly explained the reasons behind not molting in Amano shrimp.

Amano shrimp require clean water as they are a breed of tropical rivers that reaches the sea. This algae-eating shrimp shouldn’t be placed in water with a low nitrate, nitrite, and ammonia. If your water is dirty and has a high amount of these compositions, then Amano shrimps hesitate to molt under such conditions.

Often the new shrimps that you’ve gotten from the suppliers find difficulty living in a new tank. If the water has been changed right before putting your Amano shrimps, it can result in a distressed Amano. Eventually, you won’t see him thriving and molting in your tank.

This is why you need to know the necessary preparations and requirements for acclimatizing a new Amano into a tank. As I said earlier, do not change your tank water right before putting them into it. Wait at least a couple of days before putting one.

Shrimps only molt when they grow, and growth only happens when they get properly fed. Thus, whenever Amano shrimps aren’t getting a proper diet, they will cease to molt. Feeding doesn’t only mean one type of food but a wholesome diet which they get.

Amano shrimps consume loads of algae, but they do not eat every kind of algae. They feed on hair algae that are soft compared to the thick algae present in the sides of tanks. These hair algae grow along with plants in an aquarium. However, when there’s a lack of food in the aquarium, then they cannot grow proportionately and won’t molt or molt very often, even during young age.

Overpopulation also leads to not molting.

Even though overpopulation is not common in Amano shrimp, they cannot breed in captive tanks (unless a meticulous process is conducted). However, if you keep more than 3 Amano shrimp in a 10-gallon tank, you are overpopulating your tank. Overpopulation means underfeeding and will leave your Amano shrimps to be hungry and malnourished.

As you know, Amano shrimps are voracious eater; they won’t have enough algae to graze if their habitat is overpopulated. If you keep your shrimps with other inhabitants in the same tank, they will find it hard to come out during the day and, again, be underfed. Proper growth of an Amano shrimp cannot be expected when they are always stressed and fearful of other inhabitants. Therefore overpopulation can delay your shrimp’s molting process.

Young shrimps shed every once in a week as they are highly voracious eater during this stage. They will nibble on every algae in your tank until it is spotless. However, once they reach 2 inches, which is their maximum size, they won’t need to shed that often.

An adult Amano shrimp will molt once in 3-4 weeks when they are healthy. So, if your shrimp is already of more than six months, then they might have reached up to their maximum growth and won’t shed like it used to.

This is why you need to know how old your shrimps are while getting them.

How To Know If Your Amano Shrimp Is Molting?

An Amano shrimp will show some signs when it is about to molt. A prominent sign could be your shrimp not showing any movement for a couple of hours. They will stand still and remain motionless while they move their antennae only. And when you again visit after a few hours, you will see the molt that it has shredded. This fresh molt will look similar to the body of your shrimp.

However, if there’s a group of Amano shrimps not feeding but showing the signs mentioned above, it could be other reasons like water quality isn’t up to their requirements. You need to check the water quality and temperature to ensure everything is fine with their habitat.

Do Amano Shrimp Eat Their Molt?

Amano shrimps eat almost everything. They consume almost everything that the other aquatic inhabitants of the tank or we take as waste. So molt is no exception. Once they molt, they will hover over different tank areas and hid because they feel vulnerable. You shouldn’t remove molts from the tank because other shrimps or the same shrimp will eat it afterward. They gain the lost calcium by eating their molt.

Should I remove shrimp molts from the tank?

No, you shouldn’t remove shrimp molts in the tank. Generally, leave it for a day or two and wait if any of your shrimp eats it. The only time you should remove it is if the molt is starting to rot and about to host parasites on it.

Final Words On How Often Do Amano Shrimp Molt?

Young Amanos molt once a week and start to lessen the molting once they reach their adult phase. So, you shouldn’t worry if your shrimps are molting. Sometimes, there might be cases when your Amanos are unable to molt fully. However, you can do nothing about it because you might only pose harm when you place your hands directly onto his delicate body. Just like every shrimp, Amano shrimps too molt whenever they are growing. After the molting, your shrimp will hide for 2-3 days to regrow its new exoskeleton. So, place enough food and maintain water quality for your shrimp to thrive and molt properly.