How Strong is A Turtle Shell? Are They Bulletproof? 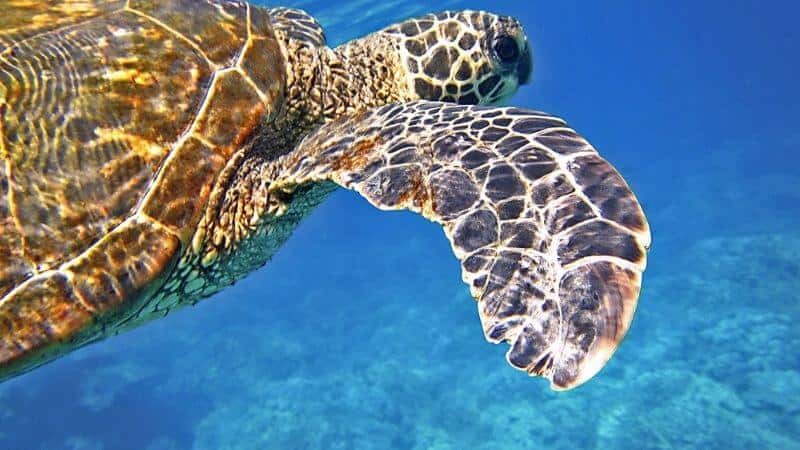 Nature has given every being a feature that protects them from predators. Some animals have agile muscles for escaping, whereas some have quills to scare off their attackers. One such defensively gifted creature is a turtle. Their shells are extremely tough shields that are impenetrable for predators to break.

So, how strong is a turtle shell? Turtles have a tough shell that can withstand 200 times its own weight. This means that 1000 pounds of pressure won’t be enough to break a turtle’s shell.

So what makes these turtle shells tough? Let’s dwell further.

What Makes A Turtle Shell Hard?

On the surface of these shells, there are hard scales known as scutes. Scutes protect the turtle from getting scratches and bruises.

Plastrons are flat in structure and protect the turtle when predators topple them upside down, in addition to shielding the internal organs.

Can A Turtle’s Shell And Its Body Separate?

How Much Force Is Required To Break A Turtle Shell?

Turtles shells are sturdy enough to withstand extreme pressure. Different species of turtles have different degrees of hardness in shells. It’s believed that a turtle shell can resist up to 200 times its weight. So, a 1000 pound of pressure might not be enough to break a turtle’s shell.

As I have said, different turtles’ breeds have different degrees of hardiness. Sea turtles have a softer shell compared to freshwater turtles. So, a strong bite from a shark can break a sea turtle’s shell.

Turtle shells are super hard, but it doesn’t mean that they are bulletproof. Bullets, when fired, travel at an extreme speed that can pierce even the hardest of substances.

Shells are made up of bones and contain blood vessels. Even if the bullet doesn’t pierce the shell, the turtle will feel excruciating pain. When shot, the turtle might bleed to death.

Wanna be an expert turtle parent?

Which Turtle Has The Hardest Shell?

There’s no exact measure to ascertain which turtle has the hardest shell. However, sea turtles have a comparatively softer shell than freshwater turtles. For instance, red-eared sliders have denser shells than a green sea turtle.

Also, the level of hardness depends upon the size of the turtle. Adults generally have a thicker shell than young turtles.

Who Has A Harder Shell? Turtle Or Tortoise?

A tortoise has a more hardened shell than a turtle. Tortoises have evolved to have more stronger shells because they can’t escape to water when in danger and have to solely rely on their shells.

Can A Turtle Shell Break?

Yes, no matter how hard a turtle’s shell might be, it can break. Besides injuries, health conditions like pyramiding and malnutrition also can cause the shell to break. Lack of proper basking opportunities and dirty water can also have a direct impact on the shell’s health.

Let’s have a look at these reasons in detail!

Pyramiding is an abnormal growth in scutes during the active development stage of a turtle. Factors such as inappropriate habitat, nutrition, or stress too can cause pyramiding in turtles.

Turtles, too, are susceptible to malnutrition. Yes, it can be tough to replicate the same diets they consume in the wild. Hence a malnourished turtle will be prone to a weak shell, which later can break if there’s a lack of nutrients or food.

But you can always take inspiration from his natural diet and give well-rounded meals. Turtles are known for devouring every kind of food, so it won’t be hard to provide your turtle with a healthy diet.

Here’s a link to vitamin supplement from Nature Zone that I use for my turtles. I add a few drops in their food every time to ensure their vitamin A intake is fulfilled.

No Exposure To Sunlight

Turtles are cold-blooded animals, and unlike us, they cannot control their body temperature to adjust to their surroundings. So, whenever a turtle dwells too long in the water, they will need the warmth of sunlight.

If they are exposed to too much heat, they will have to dive into the water to cool down their bodies.

If a turtle cannot get an adequate amount of sunlight, the keratin buildup in its body will deplete, causing weak shells and ultimately breaking the shell.

However, it’s impractical to expect a pet turtle to have plenty of sunlight at all times. That’s where full-spectrum lights like this one comes into play.

Clean water is of primary importance in a turtle’s life. Yes, turtles are one of the messiest reptiles you can keep in a tank, but a turtle cannot thrive in dirty water.

In the wild, there’s running water, and the mess they make is miniscule out there. But inside a tank, a polluted habitat will result in shell diseases and can break your turtle’s shell.

Also, chlorinated water, too, has a negative impact on their bodies. So, for a turtle tank, make sure you dechlorinate the water.

Which Animal Can Break A Turtle’s Shell?

Even though a turtle’s shell is one of the most formidable defensive covers, some animals can break them, especially the predators. Crocodiles, hippos, and even some birds are known to do so.

Here are some of the animals who can break a turtle’s shell.

Crocodiles and alligators have powerful jaws that can break even the sturdiest of turtle shells. And turtles are prey to these reptilian predators.

It may come as a surprise to you, but the hippopotamus has more biting power than crocodiles. So a single bite can break a turtles shell if caught between the jaws of a hippopotamus.

But the good news is that hippopotamuses are vegetarians and won’t attack turtles unless agitated or encroached.

Turtles in the sea are prey to sharks and whales. Moreover, the shells in marine turtles are softer than the freshwater turtles. Sharks have one of the most potent bite forces among sea predators.

Their jaw power can easily crush the turtle’s shell underwater. So, it is no surprise that turtles are one of the tastiest prey for sharks and whales.

Birds like eagles and vultures have keen eyes when searching for prey, and turtles make wholesome food for them. These predator birds have sharp beaks, which they use for gnawing meat.

However, brute force alone isn’t enough for them to break through the turtle’s hard shells.

So, using their intelligence, these birds will grab a turtle with their claws and take it to a greater height. Once they reach up in the clouds, they will drop turtles over the rocks, which will break the turtle’s shell.

Honey Badgers are one of the fiercest animals who are natural predators to turtles and tortoises. Their bite force with sharp teeth can crush a turtle’s shell after just a few bites.

Can Turtle Shell Grow Back Regrow?

A turtle’s shell can heal after slight fractures, but they cannot regrow their shell once it’s completely broken. Irrespective of the severity, a broken turtle shell should always be first assessed by a vet before you proceed with any treatment.

Final Words: How Strong Is A Turtle’s Shell?

Although the shell protects a turtle from several predators, these shells aren’t unbreakable. Factors like inappropriate habitat, a deficit in nutrition, lack of vitamin D, and sunlight can gradually break their shell. Along with that, predators like crocodiles, alligators, and sharks can crack their shells. If you are keeping a turtle in the tank, you need to provide him with a proper diet and adequate space for basking under the heat lamp.