How The Guppy Got Its Spot? This Is What Science Says. 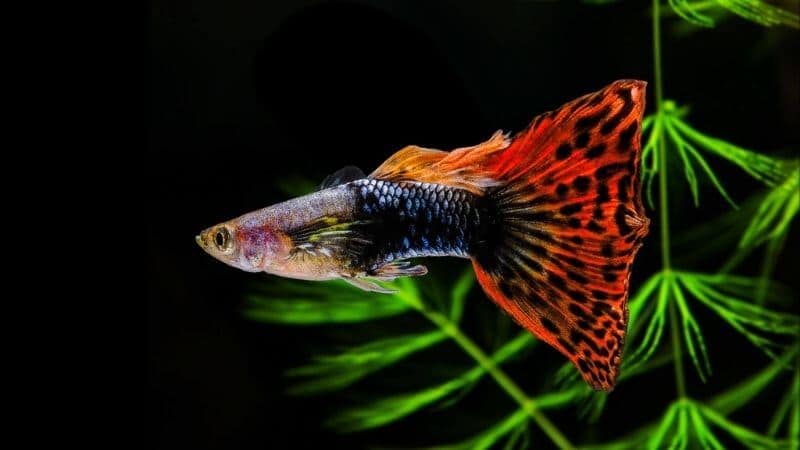 If you have raised guppies, you know they have one of a kind of personality and history. That’s what pushed me to write this article. When researching how the guppy got its spot, I came across many scholarly articles filled with jargon. So, here’s a simplified version with everything you know.

How the Guppy Got Its Spot?

At least three pigment cell varieties from different skin layers contribute to development of black, blue, and orange spots in guppies. A research by scientists from Max Planck Institute for Developmental Biology used electron microscopy to understand the relative contributions of multiple pigment cell types to the visible skin color.

The scientists concluded that the pigment cell organization was identical in both captive and wild guppies. Translucent, reflective, and iridescent pigment cells known as iridophores are present in all colored spots.

The answer to how the guppy got its spot is quite straightforward. But the reasons behind it are super interesting. To sum it up, it’s living in a crossfire between your killer and your love.

Why Do Guppies Have Spot?

Guppies and spots make an interesting phenomenon. The three leading hypotheses surrounding it are:

It’s widely known that female guppies are drawn towards attractive, showy males with beautiful fins. That’s because females relate the brightly colored spots with better fertility and survivability. This is the reason male guppies have retained their spots for innumerable generations.

So, the brighter the orange, blue, and black spots are, the higher will be the chance of mating for a male guppy.

Guppies living in a more risky environment sport fewer spots to better camouflage and protect themselves. The famous experiment by John Endler in 1980 trialed guppies in several artificial and natural environments. He concluded that guppies kept with predators like cichlids develop fewer spots than those living in safe areas.

More on the topic here!

The third hypothesis pretty much ties up everything to answer why do guppies have spots. As it turns out, the guppy population is continually evolving to match or stand out in their environment. It is indeed an intergenerational crisis.

Guppies from high-predator areas are overall known to have smaller and fewer spots to keep them safe from killers.

On the other hand, guppies living in low-danger area flaunt bright, vibrant spots. The same is the case where female guppies outnumber males, as male guppies will have a higher competition to mate.

And lastly, the water’s chemistry, the amount of light received, and the nutrients in food also affect the pigmentation of spots.

Now that we have answered how the guppy got its spot and why, let’s look at other equally impressive discoveries surrounding guppies, spots, and colors.

Male Guppies Have Retained Orange Spots For A Million Years

Guppies became a separate species about some 500,000 years ago. And over the course, their anatomy has changed several times except for one thing—orange spots on males. This is because female guppies are strongly drawn towards males with orange spots, according to a study from UCLA.

And it doesn’t come easy either.

The orange spots are formed with a mixture of just two pigments: drosopterins and carotenoids.

Now the former pigment is produced naturally in the body, but male guppies have to swim an extra mile for the latter.

Carotenoids can only be secreted by eating algae. The shade of orange differs mainly depending on the quality of algae available.

The researchers strongly believe that male guppies will actually do whatever it takes to maintain the ratio of drosopterins and carotenoids to produce the brightest orange shade.

Male guppies have effectively outdone us, humans, by miles with this romantic gesture.

Why Does My Guppy Have Red Spots?

The red spots in guppies can sometimes be just a darker shade of orange. But in most cases, these are actually rashes that need immediate medical attention. The red blood spots are usually caused by ammonia or nitrites poisoning. The most susceptible culprit behind this is a polluted tank.

You can tell if something’s fishy by just looking at the spots. The ones caused by medical reasons are usually like small, random speckles and splatters of color.

If the tank’s not clean and doesn’t have enough beneficial bacteria, ammonia and nitrites won’t be transformed into nitrates.

And nitrite, even in the smallest quantity, can be fatal for guppies.

This is also usually the case in an overstocked or a brand new tank.

Why Does My Guppy Have White Spots?

Once again, the white spots are not to be confused with the naturally occurring black, orange, and blue spots. The white spots in guppies are caused by a disease that’s quite common among freshwater species. It is commonly caused by parasites called ich or ick.

Fish infected by ick usually develop small, blister-like raised lesions on the skin on the stomach and fins.

Why Is My Guppy Losing Colors In Its Spots?

While the spot formation is entirely based on genetics, the saturation of colors can be influenced by environmental factors. Here are a few factors that can lead to duller spots in guppies:

And if you’re wondering why only male guppies are brightly colored compared to female counterparts, read below:

Why Do Male Guppies Have Brightly Colored Spots Than Female Guppies?

Guppies are known to display sexual dimorphism, where the males and females exhibit an array of different characteristics beyond their sexual organs.

Males have brightly colored, iridescent spots, while females are inconspicuous with shades of duller brown.

Final Say On How The Guppy Got Its Spots?

The answers to how the guppy got its spots and why guppies have spots are quite impressive, as you’ve already read.

To sum it up, the blue, black, and orange spots are formed with at least three pigment cell varieties found in several layers of skin.

On top of that, male guppies have retained the orange spots for millions of years because females love this color the most.

For male guppies, having brightly colored spots is eminent to finding a mate and reproduce.

On the other hand, the same pigmented spots increase their chance of eaten by predators.

Thus guppies living in high-risk areas have evolved to have fewer and a tad bit duller spots.

It is a quintessential, intergenerational dilemma of finding a mate and getting found by a predator for guppies.