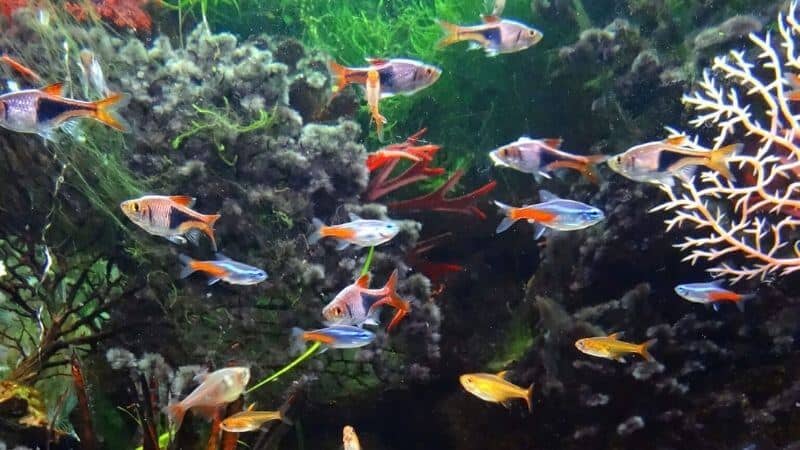 Guppies are originally from the Caribbean. But you can find them anywhere in the world today. Thanks to their high adaptability and fertility levels, guppies have outcompeted native fish in several water bodies worldwide. So, if you’re facing a similar plight in your little water body and wondering how to control the guppy population in your aquarium, you’ve come to the right place.

Guppies weren’t named millionfish for no reason. They can reproduce prolifically and overpopulate the tank in a matter of a few weeks.

Some proven methods to control their population are keeping males and females separately, reducing hiding places, increasing the ratio of female guppies, and introducing a larger tank. You can also sell, gift, or trade guppies as they’re sought after widely.

So, here are 7 proven tips on how to control the guppy population in your aquarium.

Keep The Males and Females Separately

The most effective way of controlling the guppy population in your aquarium is to keep the males separate from females. This is also one of the most common methods applied by many aquarists.

However, this isn’t entirely foolproof. Sometimes, the female guppies are already impregnated when you bring them home from the shop.

Likewise, distinguishing a male from a female guppy can be quite confusing if you’re new to this hobby.

Here are a few points of differentiation that might be helpful:

If you have too many fry in the tank, reducing hiding spots expose them to different predators. Now, this may seem like a cruel way to curb the overpopulation problem, but on the bright side, your other fishes will enjoy some tasty and healthy snacks.

Fry are relatively independent from the start and can effortlessly survive into adulthood if they successfully escape hunters. Thus, removing hiding places like plants, driftwood, and rocks will lessen their camouflaging chances and, hence, survive.

As livebearers, guppies can give birth to hundreds of fry at a time. So, if you have a high number of female guppies, the situation can get out of control pretty quickly.

However, note that fewer female guppies in the tank can stress them a lot as male guppies will compete to win their attention. And some will even resort to harassment and bullying.

Or you can house a higher number of female guppies and a few males. This will have the same effect without stressed-out female guppies.

Introducing predator fish into the tank helps to curb the overpopulation problem in two ways. First of all, the larger fish will consume a considerable amount of guppy fry as snacks.

Secondly, the introduction of new, bigger fish will intimidate and confuse guppies—resulting in a slowed down mating process.

Some large fish species that will eat guppy fry and keep their numbers in check are:

Sometimes, predator fish won’t only eat fry but also harass and eat adult guppies. So, if you introduce them to the tank, make sure to check your guppies’ wellbeing time and again.

It’s incredible how guppies’ popularity has never plummeted despite their easy availability. Anyone who loves fishkeeping loves guppies for their amicable personalities and iconic looks. Thus, they make great gifts.

Given their high reputation, they’re also quite easy to sell and trade-off.

Guppy fry also are easily sellable as they make delicious snacks for fish like betta, angelfish, and goldfish.

Use An Overflow Tank

I see many hobbyists use this method, but personally, I think this just beats the whole purpose of controlling the guppy population. Essentially, by creating an overflow tank, you’re just giving them extra space to mate and produce more babies.

However, an overflow tank does work as a temporary solution—especially if you find the methods of introducing predator fish or culling too cruel for your liking.

An outdoor pond is not a feasible option for everyone, but you can certainly go for it if you have space and will. This way, you don’t have to worry about the water habitat getting overpopulated too quickly.

However, don’t forget that mating is a continuous cycle and that too quite a prolific one for guppies.

If you create a pond, still apply a few tricks like adding a predator fish and reducing the number of hiding spots in the tank.

Why Should You Control Guppy Population In The Tank?

Now that we’ve answered how to control the guppy population in your aquarium let’s discuss why. An overstocked tank can lead to grave and life-threatening consequences for guppies like lowered oxygen level in tank, spiked levels of harmful gases, territorial aggression, and stunted development.

Here are a few consequences that occur if you overstock guppies:

An overcrowded tank will lower the tank’s oxygen level because fish breathe in oxygen and breathe out carbon dioxide just like humans.

And the reduced amount of oxygen in the air can have severe consequences for guppies.

Suppose you notice signs like rapid gill movement and frequent swim towards the surface. In that case, your guppies are likely gasping for oxygen.

Aggression is a commonly occurring problem in overcrowded tanks. It can either stem from territorial disputes or mating frustration, among other things.

A bit of aggression and nipping at each other can look fun at first, but it can lead to a chain of bad events if not addressed on time.

Fights and bullying will lead to several hurt fish with wounds, infections, and torn fins, which can even prove fatal at times.

Ammonia, nitrate, and nitrates are produced when fish waste is decomposed. These gases can be highly toxic for fish, even in small concentrations.

If the tank is overcrowded, good bacteria won’t be able to neutralize all the harmful gases present in the tank.

Not getting rid of the harmful impurities will simply invite several complications. For example, high nitrate levels often lead to fungal and bacterial infections in fish.

That’s why always make sure to have a top-notch filter to ensure a safe and clean environment for the tank’s inhabitants.

For a filter for guppies, I’d suggest you to go with Aqueon Aquarium Filter Kit w/Media.

It comes with 4 months’ worth of supply of tap conditioner and media pads.

But most importantly, it filters a tank via 5 stages, which is extremely important for guppy tanks that are prone to getting dirty quickly.

In an overcrowded tank, it’s challenging to ensure proper nutrition and care for all inhabitants. Often, the bullies will eat most of the food available and harass smaller counterparts.

Likewise, there’s simply not enough space to swim around and enough light for every fish’s growth.

Moreover, some believe that a fish’s body will automatically produce growth-suppressing hormones to hinder their growth from adapting to the rather shabby environment.

Conclusion On How To Control Guppy Population In Your Aquarium

Guppies are highly sexual livebearers that reproduce inexhaustibly. As a result, the tank can get overpopulated rather quickly. The most popular method of keeping the guppy population in check is keeping the male and female guppies in a separate tank. Creating an imbalance between male to female ratio is a close second. Introducing a predator fish, selling/ gifting fry, and making an overflow tank or an outdoor pond are other standard methods of controlling the guppy population.