How To Grow Algae In Your Freshwater Tank? Use This Product! 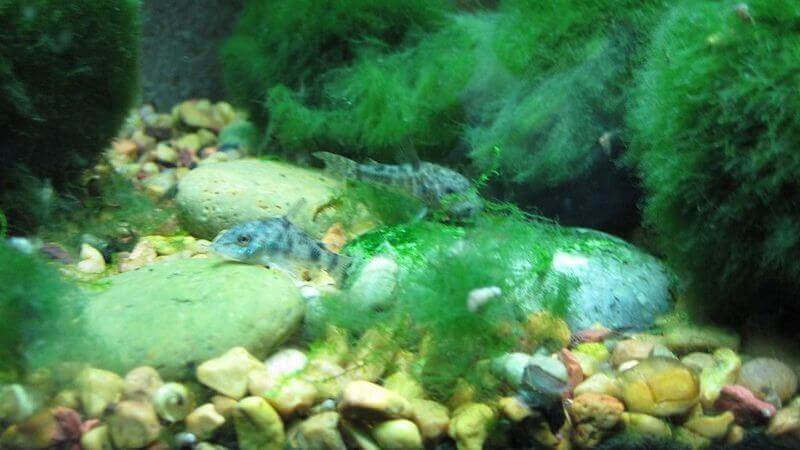 Never in my wildest dreams did I imagine that I’d be answering this question, but here we are. So, how to grow algae in your freshwater tank? Well, there are a couple of ways to do so.

In my experience, algae seem to bloom at the most inconvenient of times. But when you want it to grow for whatever reason, it suddenly seems to take forever. At least that’s what happened to me.

I wanted to grow some algae for my bottom-dwellers since they were deterring any food I offered, and I was worried they might die from starvation. But just like a watched pot never boils, it seemed to take forever and a day to grow algae.

So, I dug through some old forums dating back to 2010, shuffled through a couple of research papers, and watched an hour-long YouTube video by a Japanese fellow to finally grow algae in a freshwater tank with success.

Lucky for you, this blog will entail everything you need to know about growing algae in a freshwater tank in just the right amount. I’m not going to barrage you with a pile of information. I will refine and finetune whatever I know from my research and experience and serve it on a silver platter. 😉

How To Grow Algae In Your Freshwater Tank?

To grow algae, turns out you just have to do the opposite of what the rulebook says to reduce algae growth. Keep the lights on for longer periods, reduce water movement, increase feeding, and even allow the tank to benefit from natural sunlight for some time every day.

These are the tried and true methods of growing algae in a freshwater tank. I did everything mentioned above and saw results within a week! However, all the techniques above have a few possible caveats, too, depending on who inhabits the tank.

I also used Seachem’s freshwater plant supplement, Flourish, as one YouTuber suggested, and it worked wonders.

I’ll explain these tips and some more in detail below.

Algae need light to convert carbon dioxide into cellular material. So no light means no photosynthesis and no algae. So naturally, increasing the light duration and intensity will encourage algae growth.

Here’s the tricky part. You increase the light, but if the light isn’t strong enough, you will end up with brown algae. And guess what? 9 out of 10 fish don’t eat brown algae.

What you’re looking to grow is green algae that your fish will graze on. For that, you need to increase light intensity to at least 3 watts per gallon and keep the light source not more than 12 inches away from water. Green algae need intense light to grow and thrive.

Having said that, most freshwater fish are diurnal, meaning they stay active during the daytime and rest at night. So, keeping the lights on for an extended period can mess up their body’s internal clock. As a result, the fish might end up not getting enough rest.

And what does that mean? Weakened immune system and increased vulnerability to diseases.

Increased water movement means a reduction in stagnation. And no stagnation means no space for algae to thrive. Algae bloom the best in stagnant water – that’s why you often see them in ponds and lakes.

So, if you want to grow algae in the tank, you might want to decrease the water flow slightly, so there’s enough stagnation for algae to bloom.

But like most things in life, this technique, too, is not free of vices. Water movement is critical to oxygenating the water for the fish. Fish take the oxygenated water into their mouth, absorb dissolved oxygen, and release carbon dioxide.

When you reduce the water movement in the tank, you’re also hindering the breathing process of the fish. In extreme cases, they might even suffocate and die.

The ideal temperature for freshwater fish falls somewhere between 75-80 degrees Fahrenheit in general. And as you know, algae grows the best in warm environments.

So, you might want to set the temperature at the higher end of the spectrum, meaning at around 80 degrees Fahrenheit. This will create a favorable environment for algae growth.

But there’s one problem – obviously. Warm water will make your fish quite active. So, naturally, when they’re more active, they will inhale more oxygen. Just one hiccup – warm water holds less oxygen than cool water.

Worst-case scenario – there’s not enough oxygen for the fish to breathe in, and it will suffocate to death.

Adding a bit of plant fertilizer like Seachem’s Flourish might just do the trick. I used it and could see the result in just a few days. What these fertilizers do is provide much-needed nutrients for algae to grow.

However, if you have fish and other beings in the tank, you don’t want to drastically alter the water chemistry. Too much fertilizer in the water reduces the amount of dissolved oxygen – thus, endangering the fish’s life.

Your fish is going to love you for this one. Remember how every fish guide on the internet recommends cutting down on the food you give to prevent algae growth? Do the opposite.

Be a bit more generous during feeding sessions. This feels so wrong to say, but increased feeding means a higher amount of leftover food and fish waste. Both these supplements play an influential role in fuelling the algae growth in the tank.

Saltwater Fish For 20-Gallon Tank | 9 Fish To Choose From

How To Grow Green Carpet Algae In An Aquarium?

A Word Of Caution: Algae Can Kill Your Fish

I’m sure you have your reasons to want to grow algae in the fish, but if things get out of control, it can end up killing your fish. Although some algae species do contain harmful toxins, the most common reason behind the death of the fish isn’t algae itself but a result of decreased oxygen levels in the water volume.

It becomes a serious problem if algae consume more oxygen than they produce.

How Do You Grow Freshwater Algae?

Freshwater algae can be grown by increasing feeding, using plant fertilizers, increasing temperature and light intensity, and reducing water movement, among others.

Is Algae Good For Freshwater Aquariums?

Not all algae types are harmful. In moderation, algae can be good for your tank’s ecosystem since many fish and invertebrates like to eat it. Algae also indirectly help clean the water as a form of filtration.

However, if the algae bloom goes out of hand, it will compete with your fish for oxygen and potentially suffocate them.

Do LED Aquarium Lights Cause Algae?

LED lights don’t cause algae growth any more than other lighting options. However, if the light is used excessively, it will definitely contribute to algae growth, just like any other light.

According to scientific research, algae grows the best under white light and most under blue light. If you want to grow algae, you might want to replace the red light because the study showed that algae didn’t fare well under red light.

How To Grow Algae On Rocks In An Aquarium?

You can grow algae on rocks in an aquarium using the same tricks that help you grow algae in the aquarium. Increasing light exposure and temperature, reducing water movement, and adding plant fertilizers are some common ways to fuel algae growth.

Final Words: How To Grow Algae In Your Freshwater Tank?

Growing algae in your freshwater tank is quite easy. You simply have to do the opposite of what you’d do to prevent it from growing in the first place.

As we discussed above, you can crank up the lights, decrease the water flow, increase feeding, and let the tank bask in natural light for some time every day.

I did all the things mentioned above to grow algae in the tank for bottom-dwellers. However, using Seachem’s Flourish really gave me a head start and made things easier by leaps and bounds.

Some More Articles On Algae!

This Is Hands Down The Best Algae Eater For African Cichlid Tank!