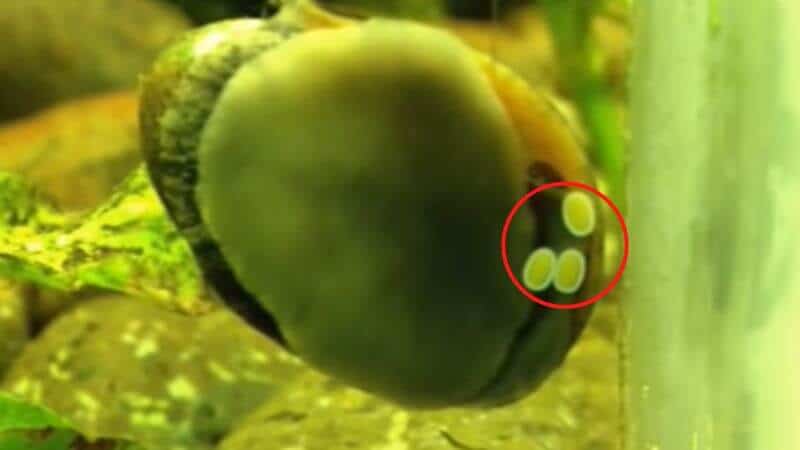 If you are a nerite snail fan like me, you probably enjoy the idea of breeding them. Personally, I like the horned nerite snails for their bulldozing ability to clean off algae and leftovers from my tank.

However, nerites aren’t your usual run-of-the-mill kinds. Obviously, one will see nerite snail eggs all over their decors all the time but seldom has anybody reported these eggs hatching in their freshwater tank.

So, in this episode, we will discuss how to hatch nerite snail eggs and what things you should consider during incubation.

How To Hatch Nerite Snail Eggs?

First, remove your nerite couple from the tank and keep them in a separate brackish water tank. Make sure the salinity level is between 1.000 to 1.019. Maintain water temperature between 72 to 78 degrees Fahrenheit. Do not install large filters in the new tank as they might suck in the eggs and the hatchlings.

Unlike other snail species, nerites do not lay eggs in clutches. Even worse, they won’t stop until they cover your whole tank with their eggs. They will paste their eggs on the driftwoods, glasses, pebbles, filters, and decors – you name it. Basically, you will find nerite snail eggs all over the tank.

Due to their adhesiveness and small size, removing them is a cumbersome task.

But if you are adamant about raising them, you must follow these steps.

If you have kept your nerites in a community tank, you must take them out first. Although they don’t find it hard to survive in a freshwater tank, they will need brackish water for their eggs to hatch.

But you might be wondering, why on earth would they lay their eggs in a freshwater tank if these eggs don’t hatch at all?

Yes, that’s a good question. The answer is that’s how biology works. No matter the living condition, nerites will have to lay their eggs. It is just like a hen laying eggs without the presence of a rooster in the coop.

And how about you scrape off the already-laid eggs from the freshwater tank and put them in salty water? Will these eggs hatch?

The odds of these eggs hatching is slim to none. First, the nerites do not lay eggs in clutches. Had there been clutches of eggs instead of individually laid ones, you would risk damaging other eggs in the bunch while scraping.

However, nerite snail eggs are individually laid, so they are highly likely to be damaged during the rubdown. Therefore, transferring scraped eggs from a freshwater tank to brackish water does sound like a bad idea. Save yourself from disappointment.

It is better to choose a pair or a group and put them in a separate brackish water tank. They will eventually breed, and the eggs will hatch normally.

There’s a misconception about brackish water among many beginner hobbyists. They think that it refers to saltwater, like ocean water. But it’s not exactly that.

Brackish water in its natural state refers to the mix of both freshwater and saltwater. So, it has lesser salinity than ocean water and higher salinity compared to freshwater.

Brackish water is measured in specific gravity (SG). Therefore, you will need a tool like a hydrometer or a refractometer to measure it.

The preferred range for brackish water is between 1.000 to 1.019. So, yes, the difference is that minuscule.

Now, let me guide you on how to make a brackish water container that meets salinity levels for your nerite snails and their eggs.

While setting up a brackish tank, the substrate is also an important element. You can include cuttlebones, corals, and other calcium supplements to mineralize the water. After the eggs hatch, the newborns will make the best of these supplements. Shoot for 350 to 450 ppm calcium content.

For temperature, keep it between 72 to 78 degrees Fahrenheit.

Ammonia and nitrite level should be at 0 ppm. Try to keep the nitrate level below 20ppm. Carbonate hardness (KH) should be maintained between 8 to 12 dKH.

The nerite eggs’ color begins to transition to dark yellow from bright yellow. This is when you know that they are about to hatch. This usually happens in the 3rd week after the eggs are laid.

The eggs typically take about 18 to 25 days to hatch from the day they are laid.

Even though nerites lay eggs individually instead of clutches, the single egg houses several eggs. So, what you thought to be an egg, is actually a pod that encases more eggs. These tiny eggs’ numbers can be estimated anywhere between 30 to 80. Thereby, expect hordes of snail babies during hatching.

Not all babies will hatch at the same time. So, it will take about a week for all eggs to empty.

When To Take Them Back To Freshwater Tank or Community Tank?

Newborn nerite larva won’t be any bigger than the size of a pea – thus, putting them at the risk of getting sucked in by the large filters of a community tank. So, please wait at least a month before you relocate them.

How Long Does It Take For Baby Nerite Snails To Grow?

Newborn nerite snails grow at a slow pace. It will take about a year for them to reach their full size. The rate at which they grow largely depends on their diet and habitat amenities.

Newly laid eggs are yellow. However, as they begin to fertilize, they will turn dark, indicating the embryo’s development inside it.

Are Nerite Snails Easy To Breed?

If it isn’t your first time keeping nerites, you can confidently say they are easy to breed. The fact that they lay eggs even in a freshwater tank makes it a no-brainer that they will do the same in a brackish water tank.

How Long Does It Take For Nerite Snails’ Eggs To Hatch?

It will take about a month from the day nerite snail eggs are laid to reach the hatching day. However, not all of them will hatch at once. It can take about a week for all hatchlings to crack open their eggs and emerge. And by the way, there’s no guarantee that every egg is fertilized and will bear offspring.

Many refrain from the thought of hatching nerite snails at home. But in reality, the process is no different than hatching freshwater species like the mystery snails. The only difference lies in the kind of water where you keep these eggs.

Maintain the right salinity level using marine salt, and you will have a healthy environment for your nerite eggs to hatch. But a word of caution: nerite snails breed rapidly, so raising them all might be daunting.