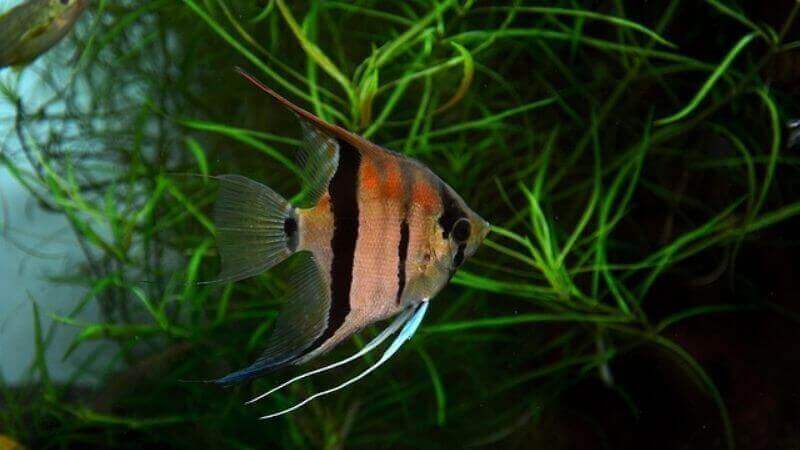 With some fish, the sexual dimorphism is evident on a dime. But that’s not the case with freshwater angelfish. How to know male and female angelfish? How to tell them apart? This can be pretty daunting for someone who’s just starting.

So, in this blog, we will discuss all the differentiating factors – both obvious and subtle ones. And I’m confident that by the end of this article, you will be able to distinguish them without any confusion.

How To Know Male And Female Angelfish?

We hope the table and the illustration are helpful! Now, let me decode these differences in detail below.

But before that, let’s tackle this question!

When Do Angelfish Reach Sexual Maturity?

Angelfish reach sexual maturity at 6-12 months of age. I know this is a pretty broad range, but the answer depends on several factors like the specimen’s genes, diet, and tank environment.

When provided with the proper care, these fish can reach sexual maturity at 6-7 months.

The reason behind why I included this question before diving into details is that it is an uphill struggle to tell them apart when young. Even the keenest eyes can deceive.

In males, the tube is long, pointy, and narrow. It almost looks like a sharpened pencil tip. On the flip side, a female’s tube is round, blunt, and has a cylindrical shape.

The thing with breeding tubes is that they’re mainly only visible during mating season. And the good news is that established angelfish can breed as quickly as once every 10 days!

To absorb the breeding tube, you might want to catch the fish with a net or transfer them to a smaller container. Either way, just make sure you’re handling them gently.

It’s impossible to check the breeding tubes if your angelfish are stressed!

Body Shape And Size Are Different

As with most species, the males are a tad bit bigger than females. Likewise, they have a more angular and sharp body shape while females look more rounded and plump.

Male angelfish have a large crowned head. That’s actually a nuchal hump that gives their forehead a bumped appearance. This feature usually only appears once the fish has come of age. Females, on the other hand, have smooth foreheads.

However, note that nuchal hump isn’t the most sure-fire way to tell the sexes apart. This difference is not always present in all strains.

Naturally, the female’s belly becomes swollen and distended when carrying eggs. After all, she may be carrying hundreds of eggs.! On the contrary, the male’s belly looks the same throughout their lifetime.

It’s also been reported that males grow a bit quicker than females. But this isn’t a very strong point. Irrespective of sex, the growth rate largely depends on other factors like diet, environment, and genes.

Ventral And Dorsal Fins Are Different

Dorsal fins in males are erect. They almost form a 90-degree angle like the nuchal hump on their forehead. In females, the dorsal fins are slick and tilt backward, complementing the slope of their forehead.

And lastly, the line from the dorsal fin to the eyes in females is slightly straighter than that of the males’.

Male angelfish are a lot more territorial, aggressive, and active than females. You will often find them chasing around tankmates, guarding a territory, or occasionally involving in nip-biting.

On the contrary, females have a lot more relaxed and subdued personalities. In most cases, the only time she gets aggressive is when she’s tending her eggs and fry.

You can also find the male chasing the female during mating season and putting on a performance to woo her. He will circle her, fan out his fins, and do a little shimmy for her.

Now that you are well versed on how to know male and female angelfish, it’s time that we quickly go over the breeding guide.

A Short Guide On Breeding Angelfish

For the best chances to breed angelfish, buy a group of them as juveniles and raise them into adulthood. As they sexually mature, you will have a few pairs. This can take anywhere between 6 months to 1 year. In the tank, these fish mate for life. However, in the wild, they’re promiscuous.

Once the breeding pair has formed, it’s best to transfer them to a separate breeding tank. That’s because the couple will grow intolerant of their tankmates out of the blue! Parental instincts – they can’t help it!

The breeding tank should at least be 29 gallons big. But if you can afford a larger one, go for that. The makeshift home’s water parameters should closely match that of their previous habitat. The last thing you want to do is send your breeding pair into a shock.

Digging is one of the steps they take as they prepare to breed. That’s because they will move the wigglers from pit to pit once they hatch for safety reasons. The fry will also have a hard time finding food that has fallen to the base.

Don’t forget to add a breeding cone or flat rocks so the fish can lay eggs on them.

For filtration, use a sponge filter. Otherwise, you’d risk the fry being sucked into the filter. You’d also benefit from adding an air pump. Proper air circulation is directly tied to the survival of the fry.

Lastly, here are the 3 things you can do to encourage them to breed:

When the fish get ready to mate, they engage in a rather amusing mating ritual. They will lock lips, shake, flare their fins, and circle each other.

They will also clean the designated mating spot meticulously, getting rid of all the dirt and sand from it. And several pits in the substrate will be dug, which will later serve as temporary homes for the fry.

The female hovers around the chosen rock and often rubs her underside against it. She will then lay the first batch of eggs.

The male will quickly follow and release the milt over them for fertilization. This process will go on for a few hours until all eggs are laid and fertilized.

A clutch may contain up to 300 eggs during one breeding season!

Caring For The Eggs And Fry

Fertilized eggs develop a tan brown color, whereas unfertilized ones turn stark white. The eggs take around 72 hours (3 days) to hatch. The parents will meticulously fan the eggs and guard the territory during this period.

Once the eggs hatch, they will rely on the nutritious yolk sac attached to their body for nutrition. During the wiggler stage, the parents will attend to the fry’s needs and move them to different pre-dug pits.

The wiggler stage lasts for around 5-6 days. After this, you can start feeding them baby brine shrimp, pulverized flake food, microworms, and daphnia.

How Long Do Angelfish Live? Find Out Angelfish’s Age

How Often Do Angelfish Lay Eggs? Breeding Guide With Pictures

Are Male Angelfish Bigger Than Females?

Other things held constant; yes, it’s true. In the animal kingdom, males are almost always bigger than females. However, in captivity, things can go either way.

While males are naturally inclined to be larger than females, the tank environment, the kind of food they eat, and most importantly, their genes play a crucial role in determining the growth rate and final size.

No, as a matter of fact, males are more aggressive than females. Males are hardwired by nature to be more assertive, short-tempered, and territorial.

But females can also be equally mean and display these traits when caring for their young ones. Maternal instincts, you can say!

Can I Keep An All-Male Angelfish Tank?

Yes, you can keep an all-male angelfish tank if that’s what you are really going after. But I’d advise against it. Let’s not forget that angelfish are cichlids. So, they’re highly territorial fish with a dash of aggression. Keeping only males will result in brawls, nipping, stress, and injuries.

So, if you’re able to ensure a super big tank for all these male angelfish to carve their private territories and are okay with a few fish attaining martyrdom, you can go ahead and keep an all-male tank.

Why Is My Male Angelfish Attacking Females?

The reason behind a male angelfish attacking another male is often competition over land and resources. However, if the male is attacking a female, it’s most likely that he’s harassing/coaxing her into mating.

Keeping angelfish in 1:1 male to female ratio means the female will be on the receiving end of harassment quite a lot. To help spread it out, I’d recommend keeping male and female angelfish in a ratio of 1:3.

Final Words: How To Know Male And Female Angelfish?

The sexual dimorphism in angelfish is inconspicuous. Even the most seasoned hobbyists may have difficulty telling them apart at first glance.

The most apparent difference between the two sexes is the appearance of the breeding tube. A male’s tube is long and pointed, whereas a female’s is blunt and wide. However, this difference is only visible during the mating season once sexually mature.

The size, body shape, nuchal hump, the appearance of the belly, and some behavioral cues are other parameters of telling them apart.